US President Joe Biden and Israeli Prime Minister Naftali Bennett concluded their first face-to-face meeting at the White House on Friday, with the American leader pledging that Iran will “never” get a nuclear weapon, and saying that though he prefers a diplomatic solution, there are “other options” should that fail.

Speaking after their one-on-one meeting, which lasted about 50 minutes, Biden said the two leaders’ teams would discuss “the unwavering commitment that we have in the United States to Israel’s security” as well as “ways to advance peace and security for Israelis and Palestinians.”

He said they would “discuss the threat from Iran and our commitment to ensure Iran never develops a nuclear weapon… We’re putting diplomacy first and seeing where that takes us. But if diplomacy fails, we’re ready to turn to other options.”

Biden added that the US supported Israel developing “deeper ties” with its Arab and Muslim neighbors, though he did not use the term “Abraham Accords,” as seems to be administration policy toward the deals mediated by the previous administration.

The American leader also committed to replenishing Israel’s Iron Dome missile defense system, which saw heavy use during May’s 11-day conflict with Hamas in Gaza. And he said he’d “direct his team to work toward getting Israel into the US visa waiver program, “and get that done.”

Biden said that he and Bennett had “become close friends,” adding that “I’ve known every Israeli prime minister since Golda Meir, gotten to know them fairly well, and I look forward to establishing a strong personal relationship with you.”

Bennett thanked Biden for his support of Israel, especially during the May conflict with Hamas in Gaza.

“That’s where friendship is really tested,” he said. “And Israel knows that we have no better or more reliable ally in the world than the United States of America.”

He returned to the theme he has expressed throughout his visit, that the Israeli government is coming with a “new spirit of goodwill… of hope, a spirit of decency and honesty, a spirit of unity and bipartisanship.”

He said that Israel looks to do good in the world, but added that “in our region, doing good is not enough,” citing the threats posed by Islamic State, Hezbollah, Islamic Jihad, Hamas and Iranian militias.

“Israel has to be strong in order to do good… and we cannot lose sight for even one moment that we’re in the toughest neighborhood in the world.” He thanked Biden for “helping yet again to fortify Israel’s strategic advantage.”

Both leaders opened their statements acknowledging Thursday’s deadly terrorist attack by Islamic State in Kabul, Afghanistan, which led to the deaths of dozens of Afghans and at least 13 US servicemembers. Biden said that “our hearts go out to all those we’ve lost” in Afghanistan while vowing to “complete the mission” in the country.

Bennett offered his “condolences and deep sadness” on behalf of the Israeli people to the US. He said the US soldiers killed were there to save lives and that this was “the very definition of courage and sacrifice. May they rest in peace.”

Especially on this day, he said, he wanted to stress that Israel “always stands together with the United State of America unequivocally.”

Bennet thanked Biden for his commitment to ensuring Iran never gets a nuclear bomb, and his openness to considering other paths if talks do not lead to a deal.

The two also mentioned the Israeli and American campaigns to vaccinate against COVID-19, and particularly both nations’ efforts to administer booster shots. Israeli began giving third shots several weeks ago and this week widened eligibility to anyone above age 30. The US is planning to start giving boosters in mid-September.

Noting the “tough decision” he made last month to pioneer the distribution of a third booster shot for Israelis, before other countries did so, Bennett said: “I can report to you, Mr. President, and to everyone that we’ve reached almost three million Israelis that have received the booster shot. And the bottom line is, it’s safe and it works. The good news, finally, is that the tide is turning in Israel.” 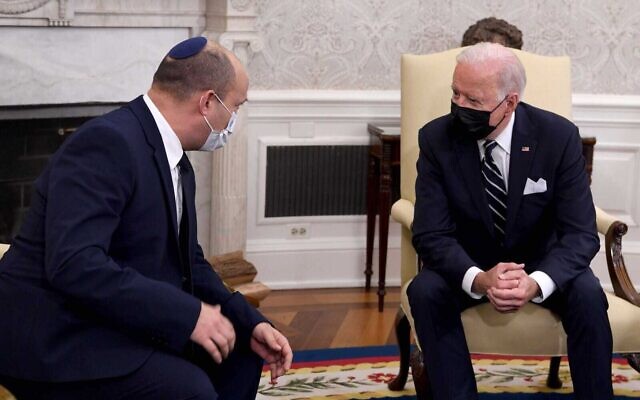 Prime Minister Naftali Bennett speaks as he meets with US President Joe Biden in the Oval Office of the White House, Friday, Aug. 27, 2021, in Washington. (GPO)

It was not clear where the figure given by Bennett came from, as according to Health Ministry figures, some 1.9 million boosters have been administered so far.

Concluding his remarks, Bennett quoted from the biblical prophet Isaiah, from whom Biden also quoted Thursday following the Kabul blast.

“Lift up thine eyes round about and behold: all these gather themselves together, and come to thee. As I live, saith the LORD, thou shalt surely clothe thee with them all as with an ornament, and gird thyself with them, like a bride,” he said in Hebrew.

Turning to translate, Bennett joked, “I can say anything now, right?” before going on to say: “What this [passage] means is the sons and daughters of the Jewish people are going to come back to our land, are going to nurse our ancient land and rebuild it. And this ancient Jewish prophecy is today Israel’s reality. And it’s a miracle that you’ve been so central and so part of it for so many years.”

He added: “You and I are going to write yet another chapter in the beautiful story of the friendship between our two nations.”

Thanking Bennett for his words, Biden noted, that much credit should go to former president Barack Obama, a contentious figure in Israel, “for making sure that we committed to that qualitative edge you would have relative to your friends in the region. So, he’s the one who deserves the credit.”

To which Bennett said: “Thank him as well.”