The Knesset held a special memorial session Monday for the dozens of people who died in a crush at a religious festival last week, with the country’s leaders calling for a comprehensive probe of the incident.

Forty-five people were crushed to death and more than 150 people were hurt, including many in critical condition, in the tragedy at a mass gathering to celebrate the Lag B’Omer holiday at the Mount Meron site in the early hours of Friday morning. Among the victims were over a dozen children and teenagers.

Monday’s session began with a moment of silence for the casualties of Israel’s deadliest peacetime disaster.

“We all mourn the terrible blow,” Netanyahu said.

He said the tragedy will be investigated from every angle, without specifying whether he means a state commission of inquiry. Netanyahu, according to Hebrew media reports, fears the political repercussions of such an inquiry.

“It is our duty to check every aspect of the disaster thoroughly and in-depth,” he said. “We will learn all the lessons for the future so that a disaster such as this will not be repeated.”

Screen capture from video of Prime Minister Benjamin Netanyahu speaking in the Knesset, May 3, 2021. (Twitter)

The prime minister also praised the groundswell of public response to the disaster that came from across the breadth of Israeli society, with Jews and Arabs providing help in any way they could, offering food and shelter, donating blood for those who were injured, and attending funerals for those who were killed.

Israelis have shown “mutual responsibility and a huge heart” in their response to the tragedy,” Netanyahu said.

“The families are not alone and this is the most important thing,” he said, vowing government assistance.

Benny Gantz, the defense and justice minister, said the incident was “a national disaster that touches each and every one of us as a people and society.”

Gantz suggested the tragedy underlines the dangers of ultra-Orthodox “autonomy” within Israeli society as reflected in the haphazard way the Lag B’Omer festival is administered at Meron, with different ultra-Orthodox sects making arrangements and with no clear oversight. 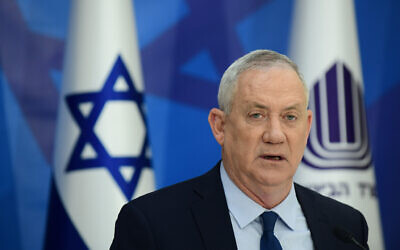 “It is our obligation to transform this national tragedy into change,” Gantz said “The State of Israel cannot allow itself to break into autonomies in which people do whatever they please.”

But he urged unity, adding that in Israel, “there is one law for all and everyone has the right to practice their faith and traditions under the auspices of the state.”

“Therefore, at this time, we don’t need criticism, but rather to draw conclusions. Not self-flagellation, but a national and personal embrace while looking ahead,” Gantz said. “It is our duty to correct. This is the order left to us unknowingly by the dead in the disaster.”

Earlier Monday, having received the go-ahead from the attorney general, Gantz instructed the Justice Ministry to prepare a proposal for a state commission of inquiry into the disaster.

Interior Minister Aryeh Deri, in his first public comments since the tragedy, urged the government to assert full control over Mount Meron.

“I was silent for several days until the funerals ended,” Deri said. “This terrible tragedy is a decree from heaven, but this does not absolve us from a thorough examination and investigation to ensure that no additional tragedies like this occur.”

“It’s time to deal with the root [of the problem], to take responsibility, to offer sizable funding and build infrastructure at the site, as is fitting for a holy site,” he said.

Deri, who heads the ultra-Orthodox Shas party, also rebuffed criticism after it emerged that he pushed for the Lag B’Omer pilgrimage to go ahead without COVID-19 restrictions limiting attendance. He said the discussions preceding the event were about the health risks of the gathering, which he dismissed, rather than general overcrowding. 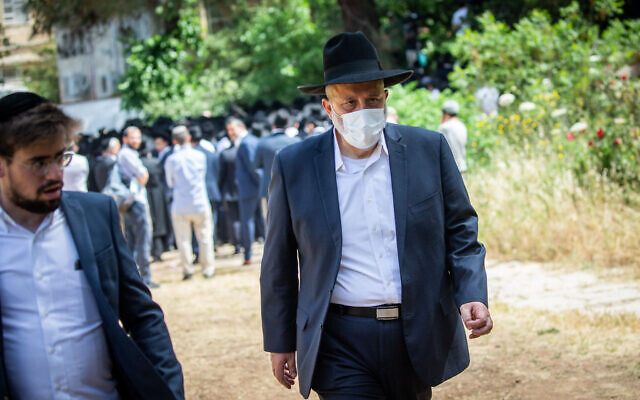 Interior Minister Aryeh Deri attends the funeral of Abraham Ambon, one of the victims of the Meron tragedy, in Jerusalem, May 3, 2021. (Yonatan Sindel/Flash90)

Earlier, Yisrael Beytenu party chairman Avigdor Liberman called on the leadership of the two ultra-Orthodox parties to resign over what he claimed were their roles in the tragedy at Mount Meron.

Liberman insisted that had the cabinet backed the recommendations of the Health Ministry to limit the number of attendees at the Lag B’Omer celebration, the tragedy could have been averted. Ultra-Orthodox lawmakers from Shas and the United Torah Judaism party had placed immense pressure on Netanyahu and Public Security Minister Amir Ohana to allow the annual Meron event to take place without any restrictions.

“I call on Aryeh Deri, [UTJ MK Yaakov] Litzman, and [UTJ chairman Moshe] Gafni to take responsibility and resign, rather than passing on responsibility [for the tragedy] onto the [police] district commander,” he said Monday, in a statement to the press at the opening of his right-wing, secular party’s faction meeting. 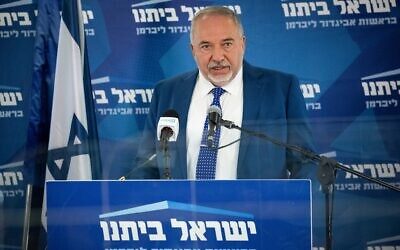 Yisrael Beytenu party chairman Avigdor Liberman speaks during a faction meeting at the Knesset, on May 3, 2021. (Yonatan Sindel/Flash90)

Liberman also joined the growing number of Netanyahu’s opponents calling for the opening of a government-appointed state inquiry into the disaster.

“We must appoint a state commission of inquiry because otherwise, we will not get real answers. Any attempt to appoint another commission is an attempt to evade responsibility and we do not intend to let that happen,” Liberman said.

Attorney General Avichai Mandelblit said Monday that there is no legal obstacle preventing the transitional government from forming a state commission of inquiry into the Meron disaster.

Following last month’s inconclusive election, the fourth in two years, the country is being run by a transitional government, as negotiations continue to form a majority coalition.