BEIJING  — At least 12 people died in severe flooding Tuesday in a Chinese provincial capital that trapped people in subways and schools, washed away vehicles and stranded people in their workplaces overnight.

The already drenched city of Zhengzhou, the capital of Henan province, was hit by 20 centimeters (8 inches) of rain from 4 to 5 p.m., the official Xinhua News Agency said, citing the Henan weather agency.

To the north of Zhengzhou, the famed Shaolin Temple known for its Buddhist monks’ mastery of martial arts was badly hit. Henan province is home to many cultural sites and a major base for industry and agriculture.

Images poured across Chinese social media showing dramatic rescues of pedestrians in Zhengzhou from torrents gushing through the streets.

Xinhua said 12 people had died and 100,000 people had been moved to safer places.

2/3: A woman rescued in flood waters in Zhengzhou, Henan (video from WeChat). pic.twitter.com/6fOblgl5OL

Stranded people were spending the night in their workplaces or checked into hotels.

Wang Guirong, a 56-year-old restaurant manager, said she planned to sleep on the couch in her restaurant after being told there was no power in her neighborhood. The State Grid Zhengzhou Power Supply Co. said a downtown substation was forced to shut down because of the rain.

3/3: More extraordinary scenes from the floods in central China – commuters on the Zhengzhou subway. There are other videos circulating on WeChat that show people in even worse predicaments – appears to be very destructive flooding. pic.twitter.com/hCJYq3ANyU

“I have lived in Zhengzhou all my life and have never seen such a heavy rainstorm as today,” Wang said.

China experiences regular flooding during the summer, but the growth of cities and conversion of farmland into subdivisions has raised the impact of such events.

The Chinese army warned that a stricken dam in the center of the country “could collapse at any time” after being severely damaged in torrential storms.

On Tuesday evening, the regional unit of the People’s Liberation Army warned that the relentless downpour had caused a 20-meter breach in the Yihetan dam in Luoyang — a city of around seven million people — with the risk that it “may collapse at any time”.

The PLA’s Central Theater Command said it had sent soldiers to carry out an emergency response including blasting and flood diversion.

“On July 20, a 20-meter breach occurred at the Yihetan dam…. the riverbank was severely damaged and the dam may collapse at any time,” it said in the statement.

Annual floods during China’s rainy season cause chaos and wash away roads, crops and houses.

But the threat has worsened over the decades, due in part to widespread construction of dams and levees that have cut connections between the river and adjacent lakes and disrupted floodplains that had helped absorb the summer surge. 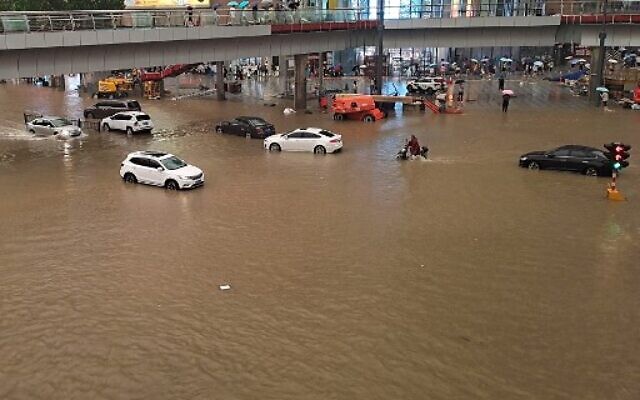 According to the authorities, the rainfall was the heaviest since record-keeping began 60 years ago, with the city seeing the equivalent of a year’s average rainfall in just three days.