In a “victory” event to celebrate the formation of a new government Prime Minister Naftali Bennett vowed Wednesday to transform his small Yamina party into the main governing party in Israel in the coming years.

During the gathering of Yamina activists, Bennett predicted that the coalition government that he heads along with Yesh Atid’s Yair Lapid would survive despite the diverse nature of the alliance and its slim majority in the Knesset.

“This government will last the full four years and it is a government of all of Israel,” he said. “There is only one Israel.”

Bennett also announced that he was launching a membership drive to expand Yamina, which only won seven seats in the election. “Yamina will flourish to become the governing party of the State of Israel.”

Despite winning only seven seats — which dropped to six when one of the MKs refused to support the coalition — Bennett was able to secure the top position in a rotation agreement with Lapid, due to his role as kingmaker poised between parties that refused to sit with former prime minister Benjamin Netanyahu, and Netanyahu’s bloc.

Bennett described sitting in the prime minister’s chair for the first time: “At that moment I did not feel pride or honor, but only the heavy weight of responsibility that slowly descended.”

Prime Minister Naftali Bennett at an event for activists in his Yamina party on June 23, 2021. (Screen capture: Twitter)

Bennett said the decision to choose to sit in a coalition that also includes left-wing and an Arab party was the right thing to do even if it angered some of his right-wing supporters.

“In the choice between short-term political gain and doing what was good for Israel, we chose the good,” he said.” that is our compass, if we continue with this, slowly but surely we will grow and grow to lead Israel for many years to come.”

Netanyahu’s Likud party reacted to the conference saying: “Only a cheat can celebrate a ‘victory’ with six mandates.”

Likud and Netanyahu accuse Bennett of betraying the right after he vowed in the election campaign not to join forces with Lapid.

Meanwhile, New Hope party leader and Justice Minister Gideon Sa’ar, who broke from Likud and joined the unity coalition, accused Likud of playing politics ahead of the interest of the country.

At an event for his party activists, Sa’ar criticized Netanyahu and Likud for not voting with the coalition to approve an extension of the so-called Palestinian “family reunification” law, noting it was passed in 2003 under a Likud-led government and that the party had since long backed the annual extensions. 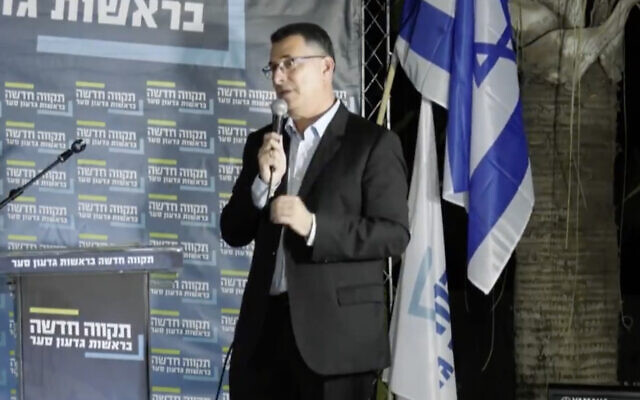 “Likud is trying to thwart the extension of the arrangement. They prefer personal and political interests of the good of the country,” he said.

Sa’ar predicted that seeking to challenge the coalition over the extension could backfire on Likud.

“What do you think, that the people of Israel won’t understand this? That everything is kosher? That this will bring you closer to returning to power? On the contrary, it will further distance you from power,” he said. “Come to your senses, for God’s sake. Serve the people and the country from the opposition.”

He also tore into Netanyahu and the former premier’s closest supporters.

“The group led by Netanyahu needs to be banished from power for a long time until it again understands that the role of public servants is to serve the citizens of Israel and not the personal interests of someone,” he said.

The New Hope chief, an ex-Likud minister, also slammed his former party as a “turbo engine of incitement and poison… in the media, on social media, everywhere.”