CANBERRA, Australia (AP) — Australia’s highest court on Wednesday upheld a law that can keep extremists in prison after they have served their sentences.

Five of the seven High Court judges dismissed a constitutional challenge by convicted terrorist Abdul Benbrika, who remains in a Victoria state prison despite his 15-year sentence expiring in November last year.

The 60-year-old Muslim cleric is the first to be incarcerated by a so-called continuing detention order based on an anti-terror law created in 2017.

Australia introduced the law as the number of extremists held in prisons on terror-related convictions was increasing and public concerns grew that some of the most feared of them were nearing the end of their sentences.

The legislation targets “high-risk terrorist offenders” who would “pose an unacceptable risk of committing serious … offenses if released into the community.”

The government has been accused of trampling human rights and press freedom by ratcheting up its national security laws in response to the evolving threat posed by Muslim extremists such as the Islamic State group.

Benbrika was convicted in 2009 of being the Melbourne leader and member of a terrorist cell.

He was one of 12 men in Melbourne and Sydney convicted of terror-related offenses involving the planning of attacks against various targets including the then-prime minister and a Melbourne Australian Rules Football match. No attack took place.

Under the 2017 law, prisoners convicted of terror offenses can be held for a further three years beyond their sentences if a judge grants a federal government application for a detention order.

Such an order can be renewed after three years if the prisoner is considered to continue to pose a public threat.

Image made from a video of Abdul Benbrika, an Algerian-born Muslim cleric, in Melbourne, Australia, August 4, 2005. (Australian Broadcasting Corporation via AP)

In ordering Benbrika to remain behind bars until November 2023, Victoria Supreme Court Justice Andrew Tinney found it was “highly unlikely” someone with his narcissistic personality traits, sense of infallibility, and of religious and intellectual superiority would have changed his extremist views.

Benbrika’s lawyers had argued in the High Court that his continuing imprisonment was unlawful because involuntary detention was considered in Australia to be punishment for a crime except under exceptional circumstances, such as a prisoner with a mental illness or an infectious disease.

The majority of judges ruled that protecting the community from a terror crime amounted to exceptional circumstances.

The Australian Human Rights Commission, a government-funded but operationally independent watchdog, has recognized that a post-sentence preventative detention regime can be a reasonable and necessary response to the potential for the risk posed by people convicted of terrorism-related offenses.

But the commission told the government last year that authorities need to be satisfied that there is “no other less restrictive measure that would be effective in preventing the unacceptable risk.”

New York-based Human Rights Watch has warned that such orders could lead to indefinite and arbitrary detention based on little proof.

Australia has increased the reach of continuing detention orders to include inmates whom Attorney General Christian Porter described as having “clearly demonstrated terrorist sympathies” despite not being in prison for terror-related crimes. 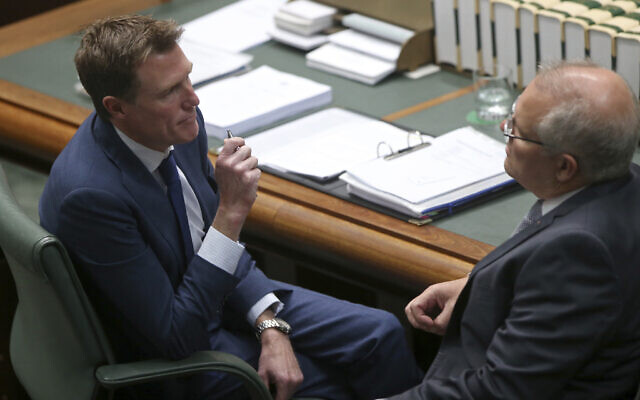 The legislation was passed in 2019, two years after a gunman who once trained with Muslim extremists, Yacqub Khayre, killed a Melbourne apartment building receptionist and wounded three police officers months after being released early from prison.

Khayre, a Somali-born refugee, took a woman hostage during a two-hour siege that ended with him being killed by police. The hostage escaped harm.

His convictions were for violent crimes unrelated to extremism. Since the 2019 law change, authorities considering releasing such a prisoner could take into account his acquittal in 2010 on charges that he plotted a suicide attack on a Sydney army base and evidence that established during his trial that he had trained with extremists in Somalia.

Britain, Australia’s former colonial master, had a type of indeterminate sentence known as imprisonment for public protection for seven years until the government abolished such sentences for violent and sex offenders convicted after 2012.

Algeria-born Benbrika faces deportation on his release from prison. In November last year, he became the first person to be stripped of Australian citizenship while still in Australia.

The first person to be stripped of Australian citizenship under an anti-terror law created in 2015 was Khaled Sharrouf in 2017.

He was a convicted Sydney member of Benbrika’s cell who was reported killed by a drone strike in Syria while fighting for the Islamic State group six months after he lost his citizenship.

Sharrouf gained international notoriety in 2014 when he posted online a photograph of his 7-year-old son clutching the severed head of a Syrian soldier. Then-US Secretary of State John Kerry described the image during an Australian visit as “one of the most disturbing, stomach-turning, grotesque photographs ever displayed.”