Austrian student, 19, is attacked on a train and called a ‘Jewish slut’ only for Vienna cops to accuse her of acting provocatively by reading a book about Jews

By Kate Dennett For Mailonline

An Austrian student who was attacked on a train and called a ‘Jewish slut’ was accused by police of acting provocatively by reading a book about Jewish people.

The student, 19, was attacked by three men on the Vienna underground while she was reading the historical book The Jew in the Modern World for a Jewish studies course.

The woman, who has not been named, was cruelly called a ‘child murderer’ and a ‘Jewish slut’ by her attackers, who also pulled her hair, according to The Times.

She said she managed to run out of the train at Stephansplatz square and escape from her alleged attackers before approaching two police officers for help.

A student, 19, was attacked by three men on the Vienna underground while she was reading the historical book The Jew in the Modern World for a Jewish studies course (file image)

The student told Austrian radio station Ö1 that one police officer’s first reaction was to ask her: ‘Why do you have to read such a book now in this conflict situation?’

His alleged comments appeared to refer to the ongoing Israeli-Palestinian conflict, which saw an outbreak of violence last month.

She claimed the officers suggested it was provocative to be reading the historical book, before adding that the attack couldn’t have been anti-Semitic as she was not Jewish.

She also claimed that the two officers told her to ‘forget’ about the alleged attack and not bother going to a police station to report the incident.

A few days after the attack, the student reportedly asked the Vienna transport authority for footage of the incident but claimed she was told it had been deleted.

She claimed she was told that footage is deleted after 72 hours unless police ask for it – which could make finding the three men who attacked the student challenging. 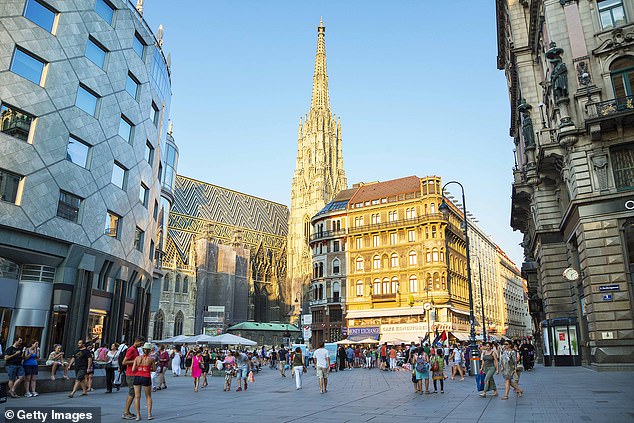 She managed to leave the train at Stephansplatz (pictured), where she approached two police officers, but claimed she was told her book was provocative and to ‘forget’ about the incident

A police spokesman reportedly said that all officers who were on patrol on the day of the attack were being contacted and questioned, while the officers could ‘face disciplinary and criminal consequences’.

Austria’s interior minister Karl Nehammer criticised the incident and said there was no tolerance for antisemitism in the East Alpine country.

He added: ‘The most effective means in the fight against antisemitism is to make Jewish life in Austria visible, the police are a guarantor of this.’

Meanwhile, Daniel Landau, who is an education expert commissioned by the government to create antisemitism awareness training for Austrian police, slammed the incident as ‘pretty horrendous’.

He told Austrian television: ‘It’s like telling a woman who has been raped “why did you dress so provocatively”.

‘It must be made unmistakably clear that reading a book in this country does not constitute complicity.’

The president of the Jewish Community of Vienna (IKG), Oskar Deutsch, said the incident showed that antisemitism was present in society as a whole.

A police spokesperson said: ‘The 19-year-old concerned reported to a police station, the facts were recorded and a complaint was made against unknown perpetrators after suspicion of coercion.

‘The State Office for the Protection of the Constitution took over the further investigations due to the possible anti-Semitist background.

‘The person concerned also reported to the Citizen Information Unit and described her perception in writing. The descriptions of those affected will now be checked and the internal surveys will be continued.’

It comes after campaigners said there was a ‘horrific surge’ in anti-Semitic attacks in the Britain in May which ‘surpassed anything we have seen before’.

The Community Security Trust (CST) recorded 351 anti-Semitic incidents between May 8 and 31, already surpassing the highest total for any single month since records began. 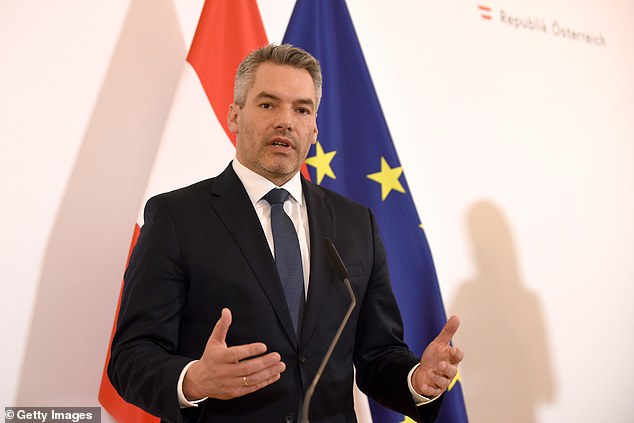 The spike has been linked to the escalation of violence in Israel and Gaza.

The CST said the rise in Britain was fuelled by anti-Semitic reactions to the conflict and called it ‘utterly predictable and completely disgraceful’.

The Campaign Against Antisemitism cited physical beatings and vandalism, chants and placards at rallies, social media abuse and threats to Jewish children at schools and universities as examples of the hostility faced by the community.

‘None of these should be features of life in Britain in 2021, but they are for Jewish people,’ a spokesperson said.

‘Ultimately, the blame lies with the racist perpetrators of these cowardly incidents. But some politicians, the media, social media companies and others have done their part in tolerating or even stoking the hate.

‘It is vital that the police investigate incidents as they arise and bring offenders to justice.

‘In a year defined by solidarity against racism worldwide, it is extraordinary how little support there is out there for Britain’s Jews. Racism against Jews just doesn’t seem to count.’