KRIMML, Austria (AFP) — Sidestepping a roaring waterfall and stumbling over rocks, an Austrian amateur theater group reenacts the treacherous Alpine escape of thousands of Jews seeking a new home after the Holocaust.

Surrounded by Austria’s snow-capped peaks, two dozen spectators hike alongside lay actors who perform scenes based on the real experiences of as many as 8,000 Holocaust survivors who traversed the Alps to reach the Italian harbor of Genoa, where they hoped to board ships to Palestine in 1947.

“The special thing about the play is that you experience it and you get an idea of what people went through back then,” says actor Celine Nerbl of the Pinzgau region group Teatro Caprile, which has been staging the theater hike in summer.

After the end of World War II, thousands remained stuck in camps for displaced Holocaust survivors in countries such as Austria, with little hope of starting a new life while antisemitism remained so deeply entrenched.

The Jewish flight aid organization Bricha smuggled groups of as many as 200 people on trucks via the camp “Givat Avoda,” which translates to “Hill of Labor,” in the Austrian town of Saalfelden, to Krimml from where they had to continue by foot.

It is here that the reenactment begins, and it is an emotional, eight-hour-long hike for participants.

Actors of the theatre group Teatro Caprile reenact an emigration scene on the old Roman road on the Windbach Alp in the Krimmler Tauern Alps on the border between Austria and Italy, near Krimml, on June 25, 2021. (ALEX HALADA/AFP)

“You can feel yourself in there,” says Austrian Marion Mikenda, a local who participated in the guided trek with her father.

“Nobody wanted them, even after the war, so they had to flee,” says historian Rudolf Leo, who grew up in Salzburg province and who remembers his mother telling him about the 1947 Jewish exodus.

Back then, British allied forces prevented Jews from fleeing to British-controlled Palestine, making the back country mountain pass of Krimml their only escape route.

“I always thought she was wrong about the year,” Leo says of his mother’s memories. “But, no, she was completely right.”

He set the scenes along the original path: in a dense spruce forest, a lush meadow where cows graze, and inside a hut which, at an elevation of over 1,600 meters (5,250 feet), had offered the Jewish refugees shelter and a meal. 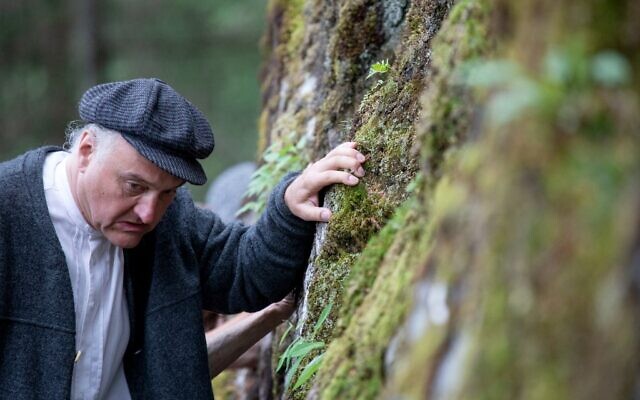 Director, actor and author of the theatre group Teatro Caprile, Andreas Kosek reenacts an emigration scene on the old Roman road in the Krimmler Tauern Alps on the border between Austria and Italy, near Krimml, on June 25, 2021. (ALEX HALADA/AFP)

“I was here with people who said ‘We never imagined there were mountains this steep,’” says Celine Nerbl’s husband Hans, who accompanies the group as a hiking guide.

The main difference is that today’s hikers are well-equipped and travel by day.

In 1947, the Jewish refugees were at times forced to hike in complete darkness, some carrying their children and hoping not to be spotted.

The history of the displaced persons’ camp and the escape of Holocaust survivors had long been forgotten, but they are slowly being resurrected in Austria. In 2007, the Alpine Peace Crossing association was founded to commemorate the post-war exodus with an annual hike.

Austrian President Alexander Van der Bellen participated in the hike in 2017, and while it could only be held virtually due to the pandemic last year, hundreds of people once again followed in the Holocaust survivors’ footsteps this summer. 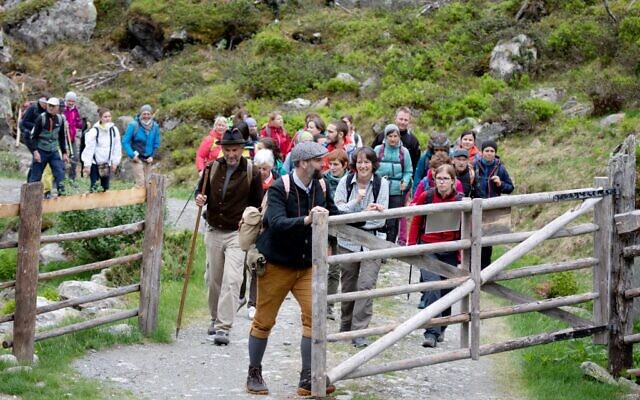 Spectators are seen following the theatre group Teatro Caprile at the Windbach Alp in the Krimmler Tauern Alps on the border between Austria and Italy towards the Krimmler mountain pass, near Krimml, on June 25, 2021.(ALEX HALADA/AFP)

Thinking of what happened back then, Hans says he sees a lot of parallels to refugees migrating today.

“The reasons for flight have stayed the same, and so has the attitude of countries who don’t want to take anyone in,” he says.

As for the hikes, actor Nerbl says descendants of survivors have even traveled by plane from Israel to Austria.

“They want to walk with us, and that’s often very, very moving,” she notes, adding that she remembers the son of two survivors who broke down and cried.

His parents, he told Nerbl, had made the journey with the few belongings they could carry — and the hope for a new life.