The Azrieli Group said its three malls, in Ramat Gan, Haifa and Modiin, would stay closed until the government makes further decisions on the matter, Hebrew media reported.

The three had been among several malls that opened Friday in defiance of the lockdown. The government has okayed almost all other stores and shopping centers to open, but those in indoor malls have been ordered to remain shut.

The Ofer Group, which operates the other wayward malls, said that it was continuing to keep properties open near Haifa, in Beersheba and in Petah Tikva.

Azrieli’s malls “will remain closed and will operate according to a plan approved by the government,” the mall’s operators said in a statement.

The group said it would wait for further developments from the coronavirus cabinet, a forum of ministers tasked with forming policy.

The Azrieli group said the malls were opened according to the terms set out in a since-shelved pilot plan that would have seen indoor shopping centers reopen for a day to test the efficacy of virus safety plans.

Though the pilot was called off, the group said in a statement that the results of the single-day opening were “being passed on to the authorities so that they can review them.”

Speaking to The Times of Israel, a source familiar with the developments denied media reports that Azrieli was pressured into remaining shut under threat of fines for breaking the lockdown, and explained that the Friday opening was only ever planned as a one-day test run.

Malls have been closed — except for the essential stores within them — since mid-September under lockdown rules. Street-front stores have recently been allowed to reopen, with a cap on the number of customers, which was raised from four to 10 on Wednesday.

The initial opening of stores drew crowds of shoppers who in many instances ignored social distancing as they waited in line to enter stores.

In contrast, Friday saw only light traffic in the malls that opened, with many stores choosing to remain shut. The malls stressed they took every precaution, limited crowding and followed all health guidelines.

A framework for reopening malls envisions ensuring there are 14 square meters of space for each shopper, only seven people waiting in line at a time for each store, only two people in an elevator at a time, and guards specifically tasked to patrol the mall and ensure the guidelines are being met, Channel 13 news reported. 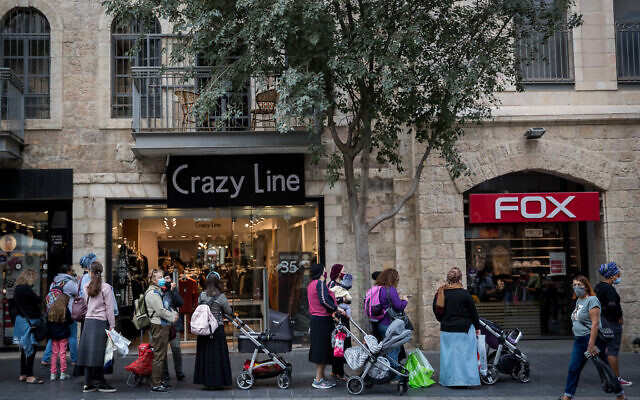 People stand in line outside stores in Jerusalem after they were permitted to reopen following a national lockdown due to the coronavirus outbreak, on November 8, 2020. (Yonatan Sindel/Flash90)

Senior health officials have warned repeatedly about the necessity for a possible third national lockdown in Israel to contain the coronavirus, warning against further easing of restrictions until an additional drop in infections.

Health Ministry figures released Sunday showed there 8,508 active patients in the country, of whom 318 are in serious condition. Since the start of the outbreak earlier this year, 328,613 people have been diagnosed with the coronavirus . There have been 2,757 deaths.

Israel imposed a monthlong lockdown on September 18 that succeeded in bringing down surging infection rates but also paralyzed much of the economy and public life, as well as shuttering the entire education system. The government has since begun lifting the restrictions but health officials have sounded alarms as the drop in infection rates first slowed, and then reversed.