When Jalahma joined, ministry spokesman Lior Haiat was more than 12 hours into his attempt to make it through more than 100 consecutive interviews to mark the one-year anniversary of the Abraham Accords.

According to the Foreign Ministry, the marathon would constitute a world record for consecutive interviews.

Jalahma pledged that Bahrain would be a “sincere and strong partner — an active partner — in peace.”

He said that, in a decade, he hopes to see “opportunities taken for more government cooperation, in different fields, whether it be technology, education, agriculture. But also I’d like to see and hope to see an increase in transactions between businesses.”

“I’d like to see warm relations between our people,” Jalahma stressed.

On September 15, 2020, the United Arab Emirates and Bahrain became the first Gulf nations to establish formal relations with the Jewish state. Later, Sudan and Morocco also normalized ties with Israel.

Reflecting on his first two weeks in Israel, Jalahma said that he was met with enthusiasm and hospitality. “I really was impressed. People have been curious, friendly, and more than accommodating.”

Earlier Tuesday, Jalahma gave his letter of credence to Herzog in a formal ceremony, a day before the one-year anniversary of the signing of the Abraham Accords at the White House, which normalized ties between Jerusalem and Manama.

Jalahma held a diplomatic meeting with Herzog after the presentation ceremony, which was followed by joint statements to the press in Hebrew and Arabic.

“Brave states take brave steps,” Herzog said to Jalahma. “The Abraham Accords were the fruit of both vision and power.”

The president called the relationship “a model for the whole Middle East” and expressed his hope that other countries will follow Bahrain’s example.

Herzog also stressed the threat Iran poses to both nations. 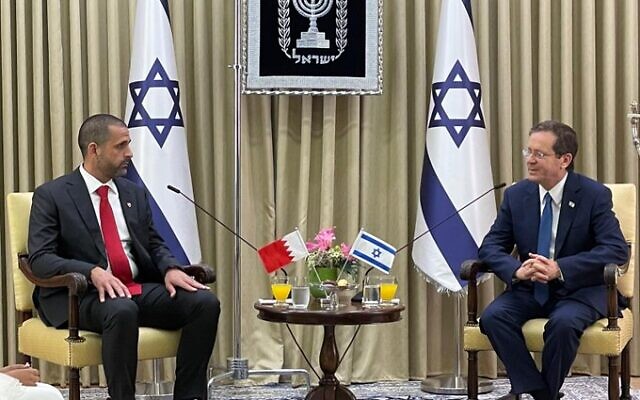 “At this point in time,” he said, “as new, credible reports are coming in of Iran’s progress toward nuclear weapons capacity, it is more important than ever to be united in our struggle against extremist forces working to undermine stability and peace in our region.”

Calling it “a great honor” to be Bahrain’s first ambassador to Israel, Jalahma said that “peace is the strategic choice of the Kingdom of Bahrain… His Majesty the King believes that dialogue, understanding, and confidence-building are lofty principles and main foundations for achieving cooperation between nations and peoples… I am confident that this historic step will lay a solid foundation for relations between our two countries, based on the values of tolerance and coexistence between peoples, beliefs, and religions.”

Jalahma wished Israel’s citizens “health, well-being, security, stability, and prosperity,” and said that he would work to make relations beneficial for both nations. 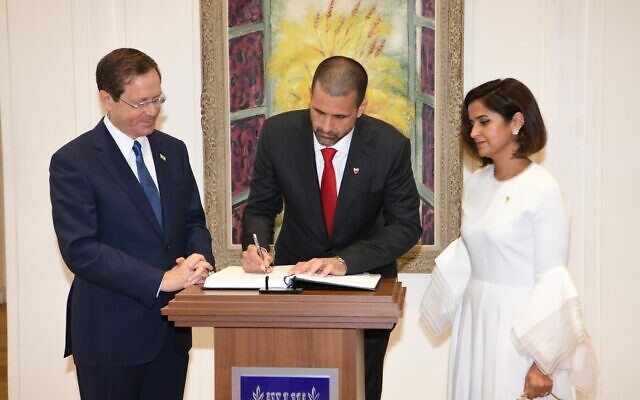 Bahrain’s first-ever ambassador to Israel Khaled Yousif Al-Jalahma (center) is joined by President Isaac Herzog (left) and his wife after presenting his credentials at the President’s Residence in Jerusalem, on September 14, 2021. (Amos Ben-Gershom/GPO)

“These are not only brave and historic steps,” Jalahma concluded in English, “these are giant steps into a future of peace, security, and prosperity for us all. I am confident that the Abraham Accords will forge a path and inspire all nations to strive for a better, more prosperous and secure world.”