AFP — Before previous Israeli elections, Aharon had considered voting against the party that traditionally speaks for his ultra-Orthodox Jewish community, but after entering the polling booth he always remained loyal — until now.

The 34-year-old, who requested his last name be withheld, told AFP that at the March 23 polls he will, for the first time, not support United Torah Judaism (UTJ), the political voice of Israel’s ultra-Orthodox Ashkenazi Jews.

The decisive blow, he said, was the party’s mishandling of the coronavirus pandemic.

“They failed big time,” he said of UTJ, which holds seven seats in Israel’s parliament, the Knesset.

Tensions between mainstream Israelis and ultra-Orthodox Jews, or Haredim, have roiled throughout the pandemic.

Thousands of ultra-Orthodox Jews attend a funeral procession for the Head of the Brisk Yeshiva, Rabbi Meshulam Dovid Soloveitchik, in Jerusalem on January 31, 2021, following his passing aged 99 due to months-long illness compounded by the coronavirus. (MENAHEM KAHANA / AFP)

The public was infuriated, and blamed Haredi defiance for extended lockdowns.

But beyond hostilities between mainstream Israelis and Haredim, experts said the pandemic has ignited an internal debate within the ultra-Orthodox community over whether its conduct during the crisis was justified.

Rabbi Yehoshua Pfeffer, editor of the haredi online journal Tzarich Iyun, told AFP that for some Haredim, the hostilities of the past year have brought the “traditional” reaction: the belief that they are the victims of a witch-hunt by secular Israel and its media. 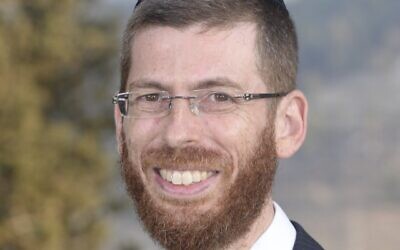 But he said others have had a more reflective response, questioning how a society that views itself as morally upright became a villain in Israel’s pandemic story, rule breakers who “failed the trial of COVID-19.”

“Does it stand to reason that we are holding mass funerals for people who died of coronavirus without anyone making serious objections?”

“If we are such an upright and morally outstanding Torah-oriented society, then surely we should be able to deal with this at least as well as everybody else, if not better.”

The rabbi noted that Haredim “know very well how to deal with people they don’t agree with,” yet when it came to lockdown scofflaws, the community’s internal discipline mechanisms were dormant.

Aharon, a married father of three, said he lives in a small Haredi community where political disloyalty can create friction.

Despite past flirtations with a non-Haredi life, he remains a part of the insular community. 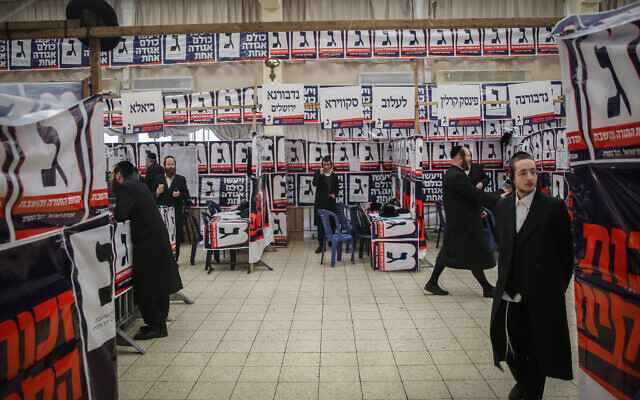 “All my family is Haredi and all my friends are, so I decided that for me it is better to stay,” he told AFP.

When the pandemic broke out, Aharon expected UTJ to stress safety, even if that meant changing the community’s rigid daily life with measures like closing Torah study schools (yeshivot) and ritual baths (mikvot).

“I was expecting them to react immediately and loudly and be clear and correct, and instead they were grey, which in Hebrew is the color we use to say that somebody is doing nothing,” he said. 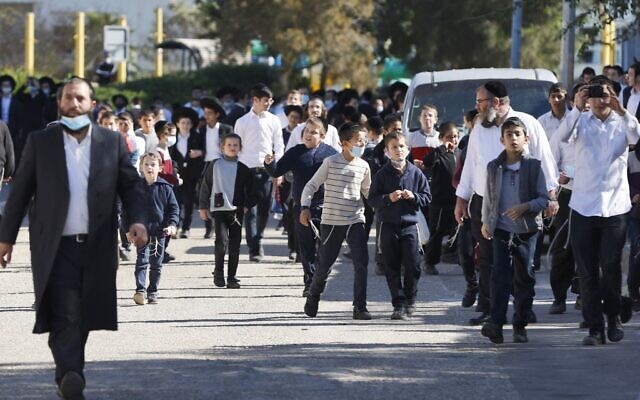 Haredi schoolchildren outside a school that opened in violation of COVID-19 lockdown rules following its closure by security forces, in the city of Ashdod on January 22, 2021. (Jack Guez/AFP)

“You can’t be a leader if you let tiny people influence you with their tiny wills,” he said. “There is a big picture.”

Pfeffer accused UTJ leaders of “speaking with two voices” on the pandemic — trying to sound like responsible politicians backing lockdowns, while not offending the rabbis who determine their political fate.

For Benjamin Brown, an expert on Haredi society at the Hebrew University, UTJ can see its base “growing much more skeptical.”

It may be on the margins but “these margins can grow larger and larger,” Brown said.

UTJ did not respond to questions regarding its leadership during the pandemic.

Pnina Pfeuffer is, by her own admission, an outlier in the Haredi community.

The divorced 42-year-old mother of two is a feminist whose New Haredim group works to promote progressive values among ultra-Orthodox Jews. 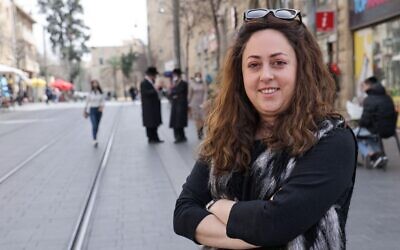 Founder and leader of Israel’s ‘New Haredim’ movement Pnina Pfeuffer, a feminist whose group works to promote progressive values among ultra-Orthodox Jews, speaks during an interview in Jerusalem, on March 9, 2021 (Emmanuel DUNAND / AFP)

For her, the UTJ’s ability to lead during the pandemic was undermined from the outset by “pre-existing conditions.”

The community does not see the party as its leader, rather as a “community service” subservient to rabbinical leadership.

She said the problem, which the pandemic has highlighted, is that Haredim have “gone from being a very small minority to a very large minority,” with ultra-Orthodox families producing roughly 40 percent Israeli-born babies.

High unemployment and poverty rates, rejection of secular education and, this past year, intransigence during a health crisis, are Haredi realities that impact the rest of Israel, she said.

The pandemic “is the wake-up call and they have to decide what to do with it,” she said.