Prime Minister Naftali Bennett said on Monday that he had “an important and very good meeting” with Egyptian President Abdel Fattah el-Sissi in Sharm el-Sheikh, in which the two “laid the foundation for deep ties moving forward.”

Bennett thanked Sissi for Egypt’s “important role in the region,” noting that after more than four decades, the peace agreement between Israel and Egypt “continues to serve as a cornerstone in Middle East security and stability,” according to a readout from his office.

Bennett also emphasized the “significant role” that Egypt plays in “maintaining security stability in the Gaza Strip,” as well as in helping to secure the release of the two Israeli civilians and the bodies of two Israeli soldiers held by Hamas.

Egypt in recent months has tried to more publicly play the role of responsible, effective broker between Israel and Hamas. Cairo had a central role in negotiating the ceasefire that ended the May Israel-Gaza war after 11 days.

In the aftermath of the war, Egypt has also sought to play a role in Gaza’s reconstruction, facilitating indirect talks between Israel and Hamas on a long-term ceasefire.

“The president also discussed the importance of the international community’s support for Egypt’s efforts to rebuild the Palestinian territories, in addition to the need to maintain calm between the Palestinian and Israeli sides, especially with Egypt’s continuous moves to ease tension between the two sides in the West Bank and Gaza Strip,” Sissi’s office said.

In statements, Sissi said he had stressed Egypt’s support for a two-state solution to the Israeli-Palestinian conflict, as well as the importance of reviving the peace process.

According to an Israeli government official, the leaders discussed measures to prevent Hamas from rearming — including strengthening oversight at the Rafah border crossing — and to avoid an escalation with the coastal enclave, as well as negotiating a prisoner exchange with Israel.

Iran’s nuclear program and support for armed proxy groups was one of the main topics discussed, according to the Israeli government official, who briefed reporters after the meeting.

The Israeli official said the two leaders also discussed other important regional challenges, including Turkey’s role in the Libyan civil war, Egypt-Ethiopia tensions over the Grand Ethiopian Renaissance Dam project on the Blue Nile, and the threat of jihadist terrorist groups.

Bennett and Sissi dealt with the Israel-Egypt relationship as well, talking about ways to significantly increase bilateral trade and tourism, the official said.

The meeting was rare — the first public diplomatic visit in a decade — and video from the scene showed both leaders smiling and exchanging pleasantries. An Israeli flag was perched behind Bennett as he sat across from Sissi for a photo opportunity; the flag appeared in full when it ran in Al-Ahram, the Egyptian regime’s most well-known mouthpiece.

The Monday meeting marked the first public visit of an Israeli premier to Egypt in more than a decade, since former prime minister Benjamin Netanyahu met then-Egyptian president Hosni Mubarak in 2011.

Netanyahu never formally visited Egypt again, although the two sides met for “working meetings” in secret over the years.

Israel and Egypt have bolstered their diplomatic ties in recent years. The two governments share close security interests in the Gaza Strip — Egypt, like Israel, sees the enclave’s Hamas rulers as a serious threat — as well as in Sinai and the eastern Mediterranean. 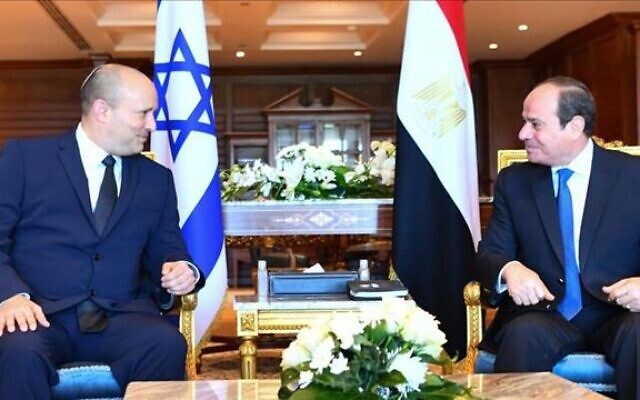 The regional calculus has also been upended over the past year by another development: the Abraham Accords. Four Arab states agreed to various levels of diplomatic ties with Israel under the agreements, removing some of the taboo of normalization, former Israeli envoy to Cairo Yitzhak Levanon told The Times of Israel on Monday.

Egypt also sees Israel as an important strategic ally — particularly as US President Joe Biden’s new administration has vowed to crack down on regimes that violate human rights. Cairo is regularly ranked by independent observers as one of the region’s most unfree countries.

“There’s rising criticism in Washington against human rights violations in Egypt, especially with the new Biden administration. Israel has been seen as a path toward Washington’s good graces — that the way to Washington goes through Jerusalem,” said Ofir Winter, an expert in Egyptian-Israeli relations at the Institute for National Security Studies in Tel Aviv.