Prime Minister Naftali Bennett spoke by phone with US President Joe Biden Thursday evening to offer his support following a deadly attack on US troops and Afghans outside Kabul’s airport earlier in the day.

The attack, in which at least 13 US servicemembers and dozens of Afghans were killed by Islamic State-affiliated terrorists, threw a wrench in a planned meeting between Bennett and Biden that had been scheduled for late Thursday morning, delaying it and forcing the Israeli leader to extend his trip.

A spokesperson for Bennett said a new meeting had been scheduled for 10:25 a.m. on Friday (5:25 p.m. in Israel). The spokesperson said the meeting would take the same format as had been planned for the day before, a one-on-one summit followed by an expanded working meeting with staffs. The two will also make remarks to the press.

The delay means Bennett, who had been planning to leave Washington late Thursday, will instead have to spend the weekend in the US capital, leaving on Saturday night at the earliest. Bennett is an Orthodox Jew and is religiously prohibited from traveling between sunset Friday and sunset Saturday. Secular Israeli leaders have also historically avoided traveling publicly on Shabbat.

During the call, Biden thanked Bennett for understanding the circumstances and being willing to extend his trip, the Prime Minister’s Office said in a statement.

There was no official readout of the call from the White House.

Bennett’s advisers had earlier assured White House staffers that they completely understood the delay in the planned summit, saying the Israeli delegation would make itself available as necessary, according to Hebrew media reports.

Israeli reporters leave the White House as the meeting between US President Joe Biden and Prime Minister Naftali Bennett is delayed, August 26, 2021 (Lazar Berman/Times of Israel)

Bennett’s office said that during the call the premier offered Biden his condolences and support “just as America has stood by Israel for years.”

Bennett is in Washington on his first official overseas trip as prime minister. Aides said he plans to use his meeting to renew strained ties between the previous Israeli administration and Democrats and to push the US on tightening opposition to Iran in light of its nuclear program.

For Biden, whose administration had been buffeted by criticism over the chaotic withdrawal from Afghanistan even before the attack, the meeting was expected to be a welcome respite with a close US ally keen on rehabilitating ties.

A warm meeting and photo-op with Biden is also important for Bennett — who leads an ideologically diverse coalition, and whose Yamina party only secured seven seats in the March 2021 elections — as he crafts his image as a national leader. He has said he wants to advance “a new spirit” of cooperation with the US administration. 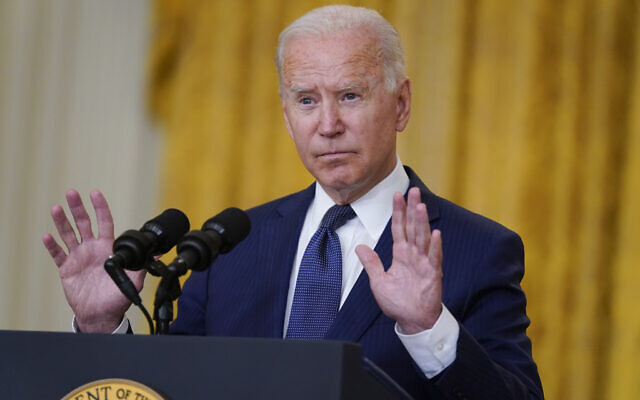 President Joe Biden speaks about the bombings at the Kabul airport that killed at least 12 U.S. service members, from the East Room of the White House, Thursday, Aug. 26, 2021, in Washington. (AP Photo/Evan Vucci)

Bennett had originally been intending to rush back to Israel on Thursday night, due to German Chancellor Angela Merkel’s planned trip to the Jewish state over the weekend; she was set to attend a Sunday cabinet meeting in Jerusalem. But with Merkel canceling her trip earlier Thursday, also due to the situation in Afghanistan, remaining in Washington longer was less complicated for Bennett.

Bennett earlier tweeted out his condolences over the attack, joining other Israeli officials vowing to support the US.

On behalf of the people of Israel, I share our deep sadness over the loss of American lives in Kabul.

Israel stands with the United States in these difficult times, just as America has always stood with us.

Our thoughts and prayers are with the people of the United States.

“The prayers of the people of Israel are with the families of the civilians and soldiers who were murdered today,” Foreign Minister Yair Lapid said Thursday, adding that “we stand shoulder to shoulder with the United States in the fight against terrorism.”

Biden vowed Thursday to push ahead with the evacuation of US citizens and allies from Kabul and stick to an August 31 deadline, while also vowing to avenge the American servicemembers killed by terrorists who attacked the perimeter of Kabul’s Hamid Karzai Airport.

A US military officials said 13 troops were killed, marking the deadliest attack on US troops in a decade and the first death of a US servicemember in Afghanistan since February 2002. 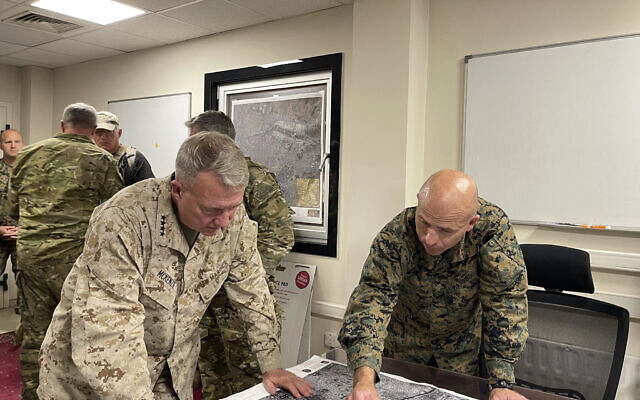 An unknown number of Afghans were also killed. Some local officials put the toll at 60 or higher. Graphic video from the aftermath of the attack showed bodies strewn across roads and in an open sewage swale on the airport’s perimeter.

“We will respond with force and precision at our time, at the place of our choosing,” Biden said. “These ISIS terrorists will not win. We will rescue the Americans; we will get our Afghan allies out, and our mission will go on. America will not be intimidated.”

The administration has been widely blamed for a chaotic and deadly evacuation that began in earnest only after the collapse of the US-backed Afghan government and the Taliban’s takeover of the country. More than 100,000 people have been evacuated so far, Afghans, Americans and others.

Lazar Berman and the Associated Press contributed to this report.