“Anyone who hoped that vaccines on their own would solve the problem — they won’t,” Bennett said at the meeting attended by ministers, health officials, national security council members, police and the military.

“Delta is surging” all over the world, he said. “On the one hand the vaccines are effective against the virus, and so we are making sure we have the necessary stocks. But vaccines alone are not enough.

He added: “We don’t know exactly to what extent the vaccine helps, but it is significantly less” against Delta than previous strains. “We all hope to see a slowdown, but the facts at the moment are that there isn’t a slowdown — not here and not around the world.”

Still, the premier said, “Our goal is to allow routine life to continue with adjustments to the coronavirus.”

Bennett said the government’s aim was to provide the public with clear directives with enough advance warning to prepare, “without surprises, without panic and mainly through forward planning.”

People shop at the Mahane Yehuda market in Jerusalem on June 15, 2021 (Olivier Fitoussi/Flash90)

At the meeting, officials decided to move to quickly approve the use of home testing kits, increase enforcement, particularly of the “Revelry Pass” set to take effect next week for weddings, parties and other celebratory indoor gatherings, and conduct a review of travel policies at Ben Gurion Airport.

Starting Friday, all travelers, including those who are vaccinated or have recovered from COVID-19, were required to self-isolate for 24 hours upon arrival to Israel, or for a shorter period if they receive a negative test result.

Meanwhile, those returning from 15 countries deemed to have high infection rates will be required to quarantine for seven days with a negative test result, according to the ministry’s updated guidelines. The full quarantine period was recently shortened from the previous 10-14 days.

The Health Ministry also said that next Friday, Spain and Kyrgyzstan will be added to the list of countries with extreme rates of infection to which Israelis are barred from flying, provided that a government committee approves the ministry’s request. 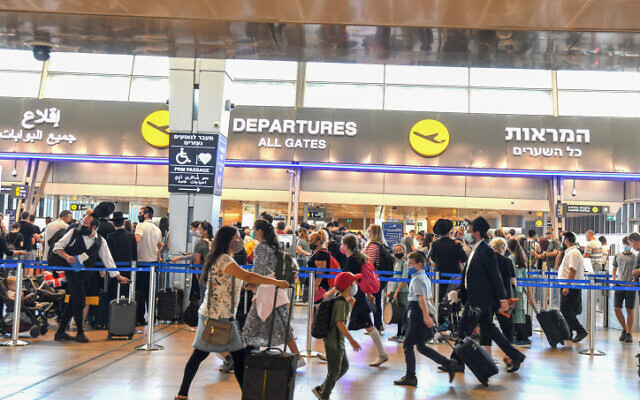 The countries that are currently off-limits for Israelis are Uzbekistan, Argentina, Belarus, Brazil, South Africa, India, Mexico and Russia.

Health Ministry figures showed 855 new cases were confirmed on Thursday, the highest figure since March 22. That came after daily infections topped 750 on each of the previous three days. Of the 65,125 tests performed Thursday, 1.52 percent came back positive — a rate slightly higher than in recent days.

There are 5,817 active virus cases in the country, Health Ministry data showed, while the death toll stood at 6,443.