Prime Minister Naftali Bennett said Sunday that the government would consider returning to the Green Pass system, which bars those who aren’t vaccinated from accessing certain venues and activities, if the highly contagious COVID-19 Delta variant continues its spread.

Opening the weekly cabinet meeting with a call for the public to wear masks indoors and avoid overcrowding, Bennett said: “If we do not cooperate and the extent of coronavirus morbidity continues to rise, we will consider returning some of the limitations of the Green Pass and we will convene the coronavirus cabinet to do so.”

The cabinet last met last week to discuss increased testing and enforcement at Israel’s borders, but did not add any major new restrictions after the indoor mask mandate was reintroduced the week before.

The Green Pass program, which ended on June 1, allowed those who were vaccinated or had recovered from the coronavirus to dine indoors at restaurants and attend cultural events.

Reports suggested that officials have been considering reimplementing the program among others meant to curb infections, such as restrictions on gatherings.

Illustrative image: A woman shows her green pass as she arrives to watch a theater at the Khan theater in Jerusalem on February 23, 2021. (Yonatan Sindel/Flash90)

“We are seeing a more intense outbreak than last week,” he told the Ynet news site, saying the recently recorded rise in both coronavirus infections and serious cases was “concerning, to say the least.”

Health Ministry figures published Sunday morning showed that 185 new coronavirus cases had been confirmed the previous day. While the number is down from the more than 300 recorded on the final days of last week, reduced weekend testing usually brings back lower figures on Sunday. The positivity rate remained at 0.5 percent, the same as it has been for the past several days.

The new infections brought the number of active cases to 2,455, the highest since the beginning of April. That figure has multiplied by 10 since June 18.

The number of patients in serious condition with COVID-19 complications has been slowly rising over the past week, reaching 35 as of Sunday, up from 26 a week before but down significantly from nearly 1,200 in January during the peak of the pandemic in Israel, before the country’s wide-scale vaccination campaign gained steam.

The death toll, however, remains at 6,429, with only one fatality recorded in almost three weeks.

Levy, who is expected to leave the Health Ministry at the end of the week and will be replaced in his role by coronavirus czar Nachman Ash, warned that the numbers could continue to grow, even with Israel’s high vaccination rates. 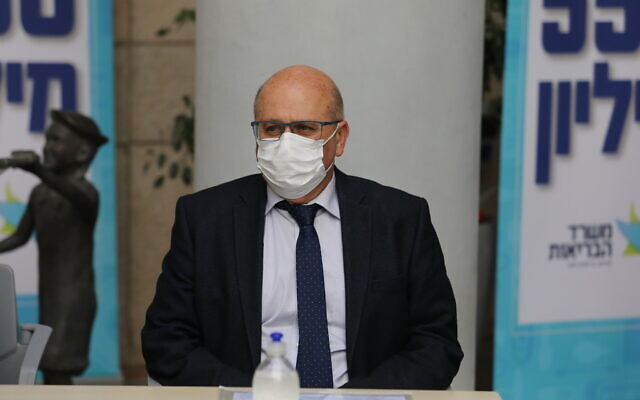 “Even among the vaccinated there are infections, and we still have many children and adolescents who are not vaccinated and can be infected,” he said. “We should be worried and see how to contain the situation before it gets out of control.”

The Health Ministry, which reportedly expects daily coronavirus diagnoses to jump to 500-600 this week, also said Sunday that 21 localities were now defined as “yellow” under its “traffic light” system for ranking municipalities based on the severity of morbidity there. That’s up from just nine on Friday.

In the coastal city of Tel Aviv, which has been “yellow” since mid-last week, a mini-outbreak was attributed to a high school end-of-school party where one student infected 83 of his peers, Channel 12 news reported.

The channel also reported that the number of Israelis now confined to house quarantine due to contact with virus carriers currently stands at 59,967, almost double what it was two weeks ago.

Amid a rise in cases, the government has been promoting vaccinations for children and teenagers aged 12-15, with over 100,000 shots administered to this age group in recent weeks, according to the Health Ministry.

Bennett appealed to young teens last week to get vaccinated in order to avert restrictions, and declared: “We do not want to impose any limits — not on parties, or on trips, or on anything.” 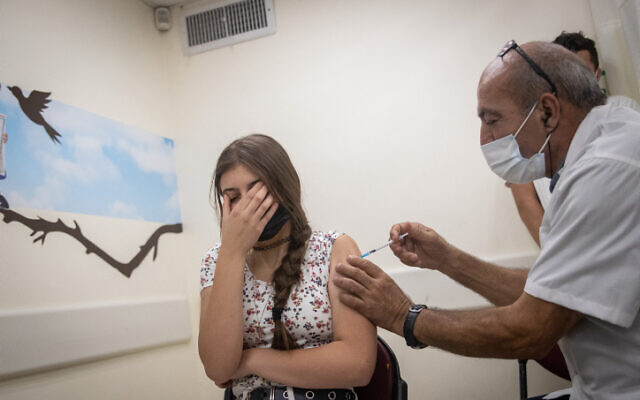 An Israeli teenager receives a coronavirus vaccine in Jerusalem, on June 24, 2021. (Yonatan Sindel/Flash90)

The Health Ministry said Saturday that over 100,000 people in Israel between the ages of 12 and 16 years old have now been vaccinated.

“This is an unprecedented achievement,” the ministry said in a statement, while reiterating its call for anyone over 12 who wants to get vaccinated to do so.

According to the ministry, over 5.62 million people — out of Israel’s population of more than 9.3 million — have gotten at least one vaccine shot. Of those, close to 5.2 million received a second dose.

In a new report released Saturday, however, Hebrew University experts said that without new restrictions, “we won’t see a slowdown and it appears it will be difficult to avoid reaching 1,000 new infections per day in two weeks’ time. We emphasize that the effect of the masks is not currently seen.”

The experts cautioned that any further stalling by the government would “require more serious steps in the future to achieve the same effect.”

The experts also cautiously estimated that the vaccines are 60-80% effective in preventing contagion when faced with the Delta variant, as compared to 90% for other strains, though they stressed the immunization’s effectiveness in preventing serious illness appeared to remain as high as previously estimated.