Prime Minister Naftali Bennett is to convene top officials to review preparations for opening the school year later in the week, his office said in a statement Sunday, with a number of key issues still unresolved.

The 1 p.m. gathering on Monday with Bennett will be attended by the Education Minister Yifat Shasha-Biton, Health Minister Nitzan Horowitz, national coronavirus czar Salman Zarka, head of the IDF Home Front Command Maj. Gen Ori Gordin, chair of the Federation of Local Authorities in Israel Haim Bibas, as well as other relevant officials, the Prime Minister’s Office said in the statement.

The meeting will come just two days before the school year is set to open on September 1, and as a number of key issues on how to keep COVID-19 infections in schools to a minimum remained unclear. Among them was the participation of unvaccinated students in studies, virus testing of students, and an agreement by teachers’ unions on the arrangements for operating schools.

Under a government-approved plan, all students are to take a rapid virus test in the 24-hours before September 1. Although the distribution of the test kits began in earnest on Sunday, there were supply and logistic issues, Channel 13 News reported.

One Tel Aviv principal told the station that he had only received two-thirds of the kits he needed. Another from Hadera said none had arrived but he had been assured they were on the way.

“Regrettably, there are still a lot of questions about this matter,” the Tel Aviv principal said.

The tests are voluntary and according to the report, some officials are concerned that the entire project could prove to be a waste of the tens of millions of shekels spent obtaining the kits from abroad. In addition, it is not clear what is supposed to happen after the first day at school, and in particular whether or not unvaccinated pupils will need to carry out further testing in order to continue attending classes.

One of the country’s biggest teachers unions was reportedly planning on taking matters into its own hands.

Ran Erez, chairman of the Secondary School Teachers Association, intends to instruct member teachers and principals to deny entry to any of the 900,000 students they tutor who are not vaccinated or do not have a negative virus test taken in the previous 24 hours, Channel 12 reported.

Such a restriction has not been ordered by the Education Ministry, and its position on the matter is not known, the report noted.

However, the Education Ministry intends to require all unvaccinated teachers to pay out of pocket for virus tests every two or three days and has indicated those that don’t could be put on unpaid leave. Erez has threatened to petition the High Court against such a move.

In the meantime, the Education Ministry has ordered regional administrators to compile lists of teachers who are not vaccinated in order to prepare for the possible need of backup staff to replace them, Channel 13 reported.

At a meeting of the Knesset Education, Culture and Sports Committee, which approved some other measures needed under the government’s plan for operating schools, chair MK Sharren Haskel said it was a “very very serious malfunction” that all of the final details have not yet been clarified.

“How will the parents know? In another four days they already need to know what is happening” she told education ministry officials. “They still don’t know.”

In total, 1.9 million students aged 3-16 will begin the year on Wednesday. Yet over 250,000 students will not return to classrooms as 124,000 are in virus quarantine and another 150,000 reside in so-called red cities, those that have the highest virus infection rates. Students in red cities are supposed to engage in distance learning, a method used when the education system was shut down last year and that was criticized as being a poor substitute for in-person learning.

A group of principals from red cities has asked for permission to hold studies in open spaces return than using distance learning, the station reported. 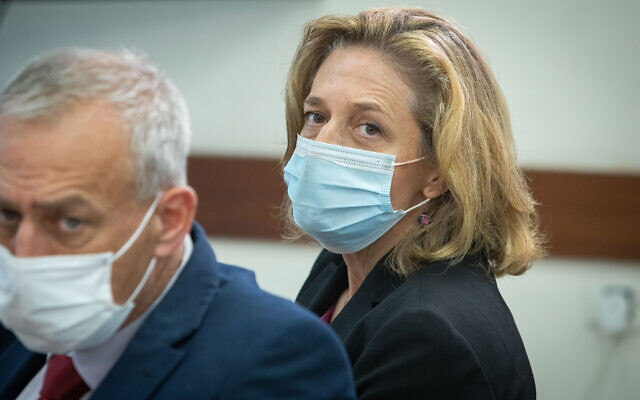 Israel is battling against a resurgence of COVID-19 infections. After bringing down daily cases to little more than a dozen a day in mid-June infections have sky-rocketed.

Health Ministry figures released Sunday showed there were 7,194 cases diagnosed the day before. Of the 77,467 active cases, there were 752 in serious condition. Since the start of the pandemic last year, 6,989 people have died of COVID-19 in Israel.

Officials are concerned that without proper precautions, the school system could become a hub for further virus infections.

The difficulties over opening the school year came as the Health Ministry on Sunday announced it will allow certain exemptions from virus restrictions for Israelis who get a third booster vaccine shot, while at the same time tightening orders for those that don’t.

The announcement came as the ministry said it was expanding a vaccine booster shot so that all Israelis over the age of 12 would be eligible for the extra does. Previously the shots were only available for those over 30.

Head of public health at the ministry Sharon Alroy-Preis stressed that the decision to expand the booster campaign to all those over the age of 12 was not political but came from health experts after assessing data on vaccinated individuals who had nonetheless become infected with COVID-19.

She cited figures that showed 91% of vaccinated people who nonetheless had become infected with COVID-19 had received their last shot at five months earlier.

“The penny dropped with the [study] papers showing a drop in effectiveness [of the vaccine] and a rise with the booster,” she told Channel 13 in an interview.

Alroy-Preis said that officials felt confident in offering the booster to those over the age of 12, even though third shots have not yet been approved for use by the US Food and Drug Authority because Israel has already given over two million doses “and we know there is nothing unusual, the number of side effects reported even lower than for the second dose.”

Alongside the changes, a senior official in the body set up to direct the campaign against the coronavirus has resigned over differences of opinion with virus czar Salman, Channel 13 reported. Ofir Aviv was director of the Center for Coronaivirus Control and considered the second-highest official after Salman himself, according to the report. Workers told the station that described Salman as a forceful character who “shouts during meetings and humiliates subordinate workers.”

The Health Ministry confirmed Aviv’s resignation saying in a statement he had stepped down of his own accord and that the search for a replacement was already underway.

In addition to his meeting on the school year, Bennet will on Monday at 8 p.m. convene a meeting of the high-level coronavirus cabinet, a forum of ministers charged with forming virus policy. That meeting will aim to approve broadening the Green Pass system to include civil servants as well as authorize a plan for holding selichot prayers, which are marked at large events held at the Western Wall in the Old City of Jerusalem, the PMO said in its statement. The Green Pass system grants access to some gatherings only to those who are vaccinated or who have come up negative in a recent virus test.

The selichot prayers, recited in synagogues around the world, are a prelude to Rosh Hashanah, the Jewish new year, which falls next week, and Yom Kippur, that Day of Atonement, which falls the week after. Usually, thousands of people crowd the Western Wall plaza for selichot prayer services that are held there.