Prime Minister Naftali Bennett on Tuesday urged Israelis to avoid nonessential international travel amid an uptick in COVID-19 cases in the country.

“If you don’t need to go abroad, do not go abroad,” said Bennett, noting that the recent coronavirus outbreak in Binyamina was traced to a family who returned from Cyprus, which is not considered a high-risk country.

Bennett, who took office last week, said the new government will reestablish the coronavirus cabinet, which will assist in making future COVID-related decisions. The prime minister said the government is working “to cut off” the extra-contagious Delta variant “early and decisively.”

He also reiterated that every person who enters Israel will have to undergo a PCR test, and said the number of testing sites at the airport have recently been increased from 30 to 70.

In addition to the mask mandate at the airport, Bennett recommended that people don masks in all indoor areas.

“If the numbers go up, to over 100 new cases for several days, it will be an order,” Bennett said, noting that he will instruct ministers and public leaders to resume wearing masks indoors immediately.

He also warned of possible “significant changes in entering and exiting Israel” once the coronavirus cabinet has reconvened and studied the current situation. 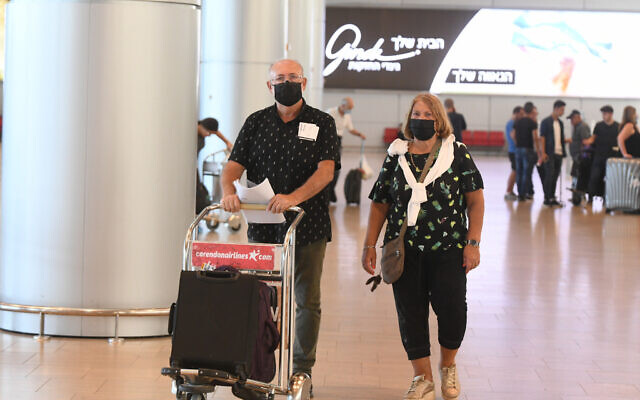 Concerns are rising in Israel over the spread of the new Delta variant, which is believed to be responsible for 70% of the new cases in the country in recent weeks. There were 125 new COVID cases confirmed on Monday, a figure more than double the number detected the day before, and the highest daily caseload since April 20.

The Health Ministry is also expected to announce the return of the mask mandate in hospitals, health clinics, old age homes, and in schools where there is a COVID outbreak, according to Channel 12 News.

Chezy Levy, director general of the Health Ministry, told the Ynet news site on Tuesday that it is “wise to wear a mask” in crowded areas, including aboard public transportation.

Earlier Tuesday, the Defense Ministry said it would assist in setting up a new COVID testing area at the airport to help handle the increased demand.

“The defense establishment will continue to aid the health system in any national mission it requires,” said Defense Minister Benny Gantz. “The war on coronavirus is not behind us, but with determined and rapid action, we will maintain a low level of infection and we will win this fight as well.”

Horowitz said the Health Ministry will “significantly strengthen the testing system at Ben-Gurion Airport… in order to prevent the formation of unreasonable lines.”

Last Friday, thousands of Israelis were allowed to exit the airport without taking a mandatory COVID test due to overcrowding at the station. The government has since vowed to step up testing capabilities and increase the enforcement of quarantine for those who require it. 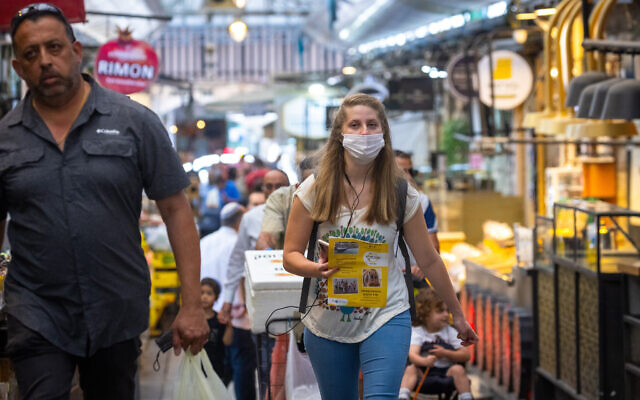 People shop, some wearing face masks, at the Mahane Yehuda market in Jerusalem, May 26, 2021. (Olivier Fitoussi/Flash90)

Israel lifted its indoor mask mandate on June 15, but the mayors of Modiin and Binyamina reimposed the mandate in schools in the two cities, after local outbreaks. Kfar Saba also reinstated masks in schools in the city on Tuesday, after several positive COVID cases among students.

One-third of new cases of COVID in Israel are believed to be among vaccinated individuals, according to Health Ministry figures. Ran Balicer, the head of Israel’s COVID advisory panel, said the figures are not surprising or alarming.

He also noted that there have been no severe COVID cases reported so far among those infected.

Coronavirus czar Nachman Ash described the recent coronavirus outbreaks at several schools as localized upticks, and not a sign that Israel could be facing a fresh wave of infections.

“This is a local and not a general outbreak, whose source is primarily from abroad,” Ash told Channel 13 News. “However, the issue of quarantine [after travel] isn’t being done properly — people aren’t strict about it and therefore we see contagion.”

On Monday, the Health Ministry said it would begin a greater push to vaccinate 12 to 15-year-olds and officially recommended that they do so. While that particular age group has been eligible for several weeks, until now, the ministry stopped short of issuing an official recommendation, and the number of vaccinations among teenagers has remained low.

In his statement on Monday, Bennett called on anyone over the age of 12 to get vaccinated as soon as possible, and noted that Israel’s stockpile of vaccines will be expiring in the coming months, and therefore teenagers should make appointments soon. The prime minister warned the teenagers to get their first shots before July 9.