The street in Ra’anana where Prime Minister Naftali Bennett lives has become the scene of protests and ramped up security measures after he became premier earlier this month, leaving many of his neighbors none too pleased.

Ra’anana Mayor Chaim Broyde told the Central District police commander on Wednesday that the protests are “getting out of control and may end in disaster,” saying he was accosted by demonstrators while sitting at a cafe in the upscale central city.

He added: “Families are scared and have been living for over two weeks now with the with the deafening noise of powerful microphones, sounds similar to alarms, screaming, sirens, drums, curses, and no one is bothering to protect a community… whose only crime is being near the private home of the prime minister.”

Right-wing protesters have been holding regular demonstrations outside Bennett’s home, accusing him of misleading voters ahead of forming a unity coalition with other right-wing, centrist, left-wing, and Arab parties to oust Benjamin Netanyahu as premier.

For the time being, Bennett does not plan to fully move to the official Prime Minister’s Residence in Jerusalem, which has yet to be vacated by Netanyahu. The two agreed last week that Netanyahu would leave the residence on the capital’s Balfour Street by July 10.

Yamina leader Naftali Bennett in a video released to supporters on March 19, 2021, from his Ra’anana home. (Yamina)

Besides the noise from the protests, Bennett’s neighbors have also complained about the increased security measures in the neighborhood, and held a public meeting on the matter Tuesday evening. The new measures have included closing off the block that Bennett’s home is on and blocking off nearby parking spaces.

“No world leader would be allowed to live in a place like this. They are turning this place into a fortified destination within a residential neighborhood,” local resident Eldad Levi told Channel 13 news.

A neighbor identified as Mike said to the network that he could no longer walk his dog on the same route, since the block that Bennett lives on was closed off, while another resident of the neighborhood said his kids were told they could not walk there.

“As I parent, I’m not ready to accept this,” the resident was quoted as saying in the report.

The report came a day after two people were lightly injured, when bleach was apparently thrown at a group of protesters demonstrating outside Bennett’s home.

It was not immediately clear who threw the liquid at the demonstrators, but witnesses said it appeared to come from one of the apartments near Bennett’s home. 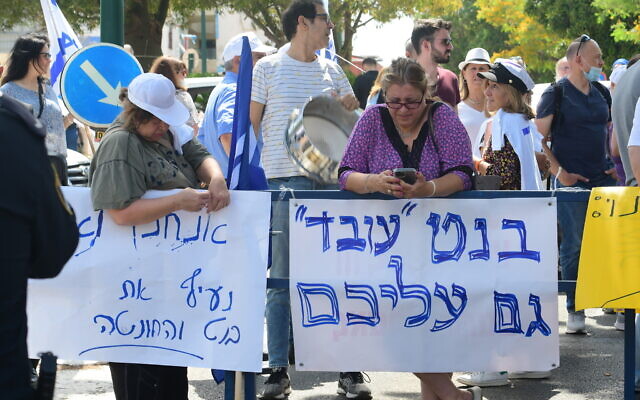 Broyde said earlier this week that he had petitioned the police to end the protests, saying residents were disturbed by the demonstrators.

“Ra’anana is not Balfour, and Ra’anana residents need to be able to live their lives,” he said, referring to the street that houses the prime minister’s official residence, which has been the scene of numerous protests in recent years.