WASHINGTON (AP) — One spent the week at his home in Delaware carefully trying to build a government and preparing to take on a pandemic.

The other largely kept to himself behind closed doors at a mostly empty White House, angrily tweeting and using his office and allies to try to subvert the results of an American election in a dangerous breach of democracy.

If the differences between US President-elect Joe Biden and President Donald Trump were not already clear, the days since the November 3 election was decided have demonstrated the dramatically divergent ways in which each approaches the job of commander in chief.

Trump has largely abandoned governing, despite a pandemic that has now killed more than 250,000 people in the US and is raging out of control. He has rejected the results of the election, concocted conspiracies that are now believed by his most loyal supporters and refused to allow his government to participate in the peaceful transition of power to the next administration while trying to pressure state legislators and election officials to overturn the will of the voters.

Denied the briefings, access to agencies and funding that are part of a traditional transition, Biden has nonetheless tried to move forward. He has named senior staff, decided on Cabinet members and attempted to glean information about policy and national security from former government officials and others, including governors, who have worked with the Trump administration.

At the White House, the West Wing was largely empty, with few staffers and little of the hustle and bustle typically seen in the tight warren of offices before the election and before yet another COVID-19 outbreak.

The circle around the president has grown smaller in recent weeks. Staffers who normally would leap at the chance to set foot in the Oval Office now try to avoid it for fear of crossing a temperamental president who has been angrily demanding answers from aides as to how to further contest the election.

Even his personal attorney, Rudy Giuliani, has been forced to steer clear of the White House after the former New York mayor’s son, a White House staffer, announced he had tested positive for the virus. Rudy Giuliani has taken over the president’s legal efforts to contest the election, despite a lack of evidence behind those challenges. 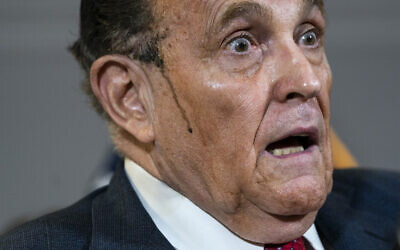 Trump snapped at aides when he was told that Giuliani and the rest of his legal team could not meet at the White House on Friday after they, too, had been exposed. And he complained to confidants that Giuliani had embarrassed himself during a Thursday news conference when what appeared to be hair dye dripped down Giuliani’s sweating face as he asserted falsehood after conspiratorial falsehood about the results.

The Trump West Wing, never a well-oiled machine, was even less organized than usual.

Staffers in the press office, who control the White House briefing room, found out from reporters on Thursday that the coronavirus task force, led by Vice President Mike Pence, had scheduled a briefing there.

Trump finally made an appearance Friday to discuss prescription drug prices — an event he had demanded, to push back against the storyline that he was in hiding. But he again skirted reporters’ questions, as he has for more than two weeks now.

Just beyond the White House gates, construction continues on the stands from which spectators will watch the inauguration parade in honor of President-elect Joe Biden in January. 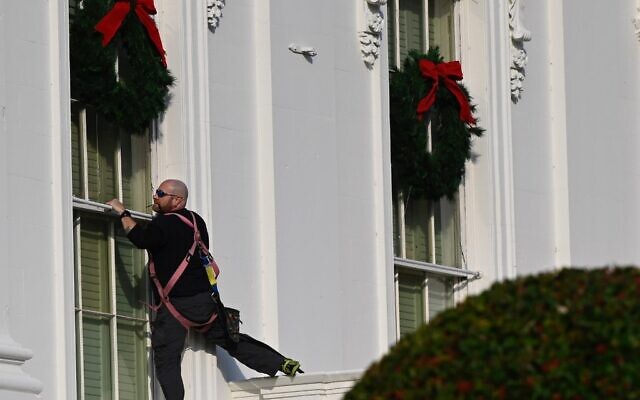 Christmas wreaths are installed at the White House in Washington, DC, on November 21, 2020. (ANDREW CABALLERO-REYNOLDS / AFP)

Just about two hours’ drive away, in Delaware, Biden focused on the business of governing rather than social media or baseless claims of voter fraud. It was his second full week as president-elect.

Biden and Vice President-elect Kamala Harris gathered each day at a makeshift transition headquarters at a theater in downtown Wilmington where they held a series of virtual meetings.

“It was more of an information gathering meeting. They didn’t put forth any policies or say, ‘This is what we want to change,’” said GOP Gov. Larry Hogan of Maryland, who participated in Thursday’s call that was focused on the coronavirus. “They were mostly listening mode.”

Indeed, the conversations, according to people familiar with their contents, were focused almost exclusively on the pandemic and how the Biden administration might try to stop the exponential spread of the disease immediately after his Jan. 20 inauguration — or even before.

Biden repeatedly called on congressional leaders to end their stalemate and pass a sweeping COVID-19 relief bill by year’s end. 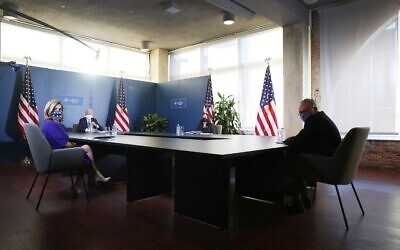 While at home, he was in regular contact with a small group of senior aides, including newly appointed chief of staff Ron Klain, to begin the complicated process of filling key administration posts. By Thursday, he had finalized his pick for treasury secretary. By Friday, he had announced more than a dozen senior White House hires.

He also made a series of thank-you calls to members of the disparate factions of the Democratic Party who had helped achieve his victory and whose continued support will be critical to rallying Americans behind his agenda.

Biden did not completely ignore Trump.

Biden answered questions during two brief news conferences during the week, and both times, he condemned the Republican president’s unprecedented push to block his transition. But even in his criticism, Biden focused on the challenge of governing.

He said Thursday that Trump’s intransigence was “another incident where he will go down in history as being one of the most irresponsible presidents in American history.”

“Let me choose my words here. I think they’re witnessing incredible irresponsibility, incredibly damaging messages being sent to the rest of the world about how democracy functions,” he told reporters.

Asked what he would say to people concerned about Trump’s push to undermine the election, Biden had a simple message: “Hang on. I’m on my way.”