US President Joe Biden phoned Prime Minister Benjamin Netanyahu on Friday to express the “profound condolences” of America after 45 people were crushed to death in a stampede during Lag B’Omer festivities at Mount Meron in northern Israel.

“The United States stands with the people of Israel, and with Jewish communities the world over, in mourning the terrible tragedy at Mount Meron,” Biden said according to a statement from the White House. “The loss of life among worshipers practicing their faith is heartbreaking.”

He said he ordered assistance be extended to Israel, while adding the US was working to gather information about American citizens who died or were hurt when the stampede occurred after midnight Thursday.

“Our Embassy and Department of State will provide all necessary support to any US citizens and their family members affected by this sad event,” he said.

According to Israel’s Foreign Ministry, at least four American citizens were among the dead. The ministry said the Israeli consulate in New York was in touch with representatives of the families.

“The people of the United States and Israel are bound together by our families, our faiths, and our histories, and we will stand with our friends. Our prayers are with those who were injured and all those who lost loved ones. May their memories be a blessing,” Biden also said, using a Jewish phrase for remembering the dead.

A statement from Netanyahu’s office said the premier thanked Biden on behalf of all Israelis.

Ultra-Orthodox Jews at the scene of a deadly stampede during Lag B’Omer festival at Mt. Meron in northern Israel, April 30, 2021 (AP Photo/Sebastian Scheiner)

Also speaking Friday were Foreign Minister Gabi Ashkenazi and US Secretary of State Antony Blinken, who phoned his Israeli counterpart to express his condolences. 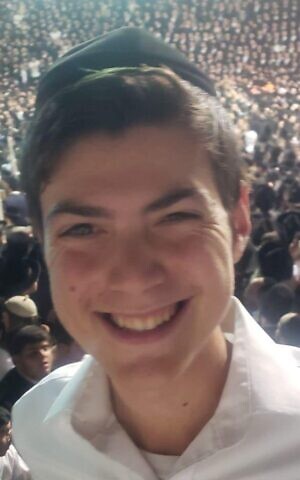 “I am deeply moved by the outpouring of support from our friends in the United States and around the world – from President Biden, who extended an offer of help, to the multiple ambassadors based in the United States and the United Nations, who sent their condolences. Your support for the State of Israel is truly heartwarming and we thank you for standing by our side during this difficult time,” Gilad Erdan, Israel’s envoy to the US and UN, said in a statement.

The only American victims to so far be publicly identified are Donny Morris, 19, from Teaneck, New Jersey, who was studying at a yeshiva near Modiin, and Yosef Amram Tauber, 18, from New York.

Along with the 45 dead, over 150 people were hurt, many critically, in what is believed to be Israel’s worst peacetime disaster.