WASHINGTON (AP) — US President Joe Biden said Tuesday the conviction of former Minneapolis Police Officer Derek Chauvin in the killing of George Floyd “can be a giant step forward” for the nation in the fight against systemic racism. But he declared that “it’s not enough.”

Biden spoke from the White House hours after the verdict alongside Vice President Kamala Harris, with the pair saying the country’s work is far from finished with the verdict.

Biden and Harris called on Congress to act swiftly to address policing reform, including by approving a bill named for Floyd, who died with his neck under Chauvin’s knee last May. Beyond that, the president said, the entire country must confront hatred to “change hearts and minds as well as laws and policies.”

“‘I can’t breathe.’ Those were George Floyd’s last words,” Biden said. “We can’t let those words die with him. We have to keep hearing those words. We must not turn away. We can’t turn away.”

Harris, the first Black woman to serve as vice president, said racism was keeping the country from fulfilling its founding promise of “liberty and justice for all.”

“It is not just a Black America problem or a people of color problem. it is a problem for every American,” she said. “It is holding our nation back from reaching our full potential.”

“A measure of justice isn’t the same as equal justice,” she said.

Biden addressed the nation after telephoning Floyd’s family following the verdict, telling them, “We’re all so relieved.” He added later that he sought to comfort Floyd’s young daughter Gianna, telling her, “Daddy did change the world.”

After about 10 hours of deliberations over two days, the jury convicted Chauvin of two counts of murder and one of manslaughter.

The verdict — and the aftermath — will be a continuing test for Biden. He has pledged to help combat racism in policing, helping African Americans who supported him in large numbers in last year’s election in the wake of protests that swept the nation after Floyd’s death and restarted a national conversation about race. But he also has long projected himself as an ally of police, who are struggling with criticism about long-used tactics and training methods and difficulties in recruitment.

Earlier Tuesday, Biden broke his administration’s silence on the trial, which has set the nation on edge for weeks, saying he was praying for “the right verdict.”

Speaking from the Oval Office while the jury was deliberating in Minneapolis, Biden said, “I’m praying the verdict is the right verdict. I think it’s overwhelming, in my view. I wouldn’t say that unless the jury was sequestered now.” 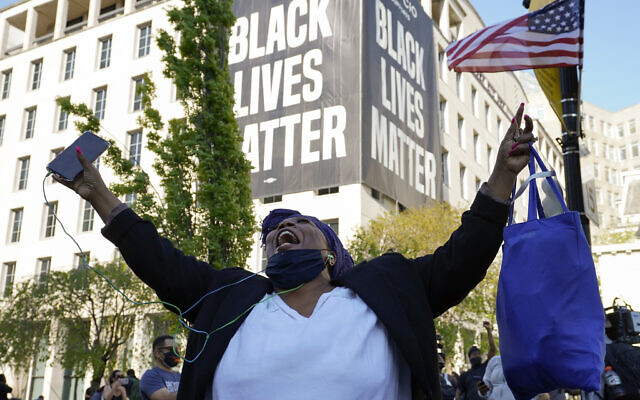 Lisa Robinson of Washington, reacts on Tuesday, April 20, 2021, in Washington, as the guilty verdict in Minneapolis, in the murder trial against former Minneapolis police officer Derek Chauvin was announced. (AP Photo/Alex Brandon)

The president had repeatedly denounced Floyd’s death but had previously stopped short of weighing in on Chauvin’s trial, with White House officials saying it would be improper to speak out during active judicial proceedings. On Tuesday, White House press secretary Jen Psaki repeatedly refused to explain Biden’s comments, doing nothing to dispel the impression that he thought Chauvin should be found guilty.

The White House had been privately weighing how to handle the verdict, dispatching specially trained community facilitators from the Justice Department in anticipation of potential protests, officials said. With word that a verdict had been reached Tuesday afternoon, Biden postponed planned remarks at the White House on his infrastructure package.

On Monday, Judge Peter Cahill, who presided over the trial, admonished public officials about speaking out while the trial was ongoing.

“I wish elected officials would stop talking about this case, especially in a manner that’s disrespectful to the rule of law and to the judicial branch and our function,” he said shortly after sending the jury to begin deliberations.

Defense attorneys often cite remarks made by public officials as a reason to appeal a verdict, in part because they could poison the jury against the defendant. 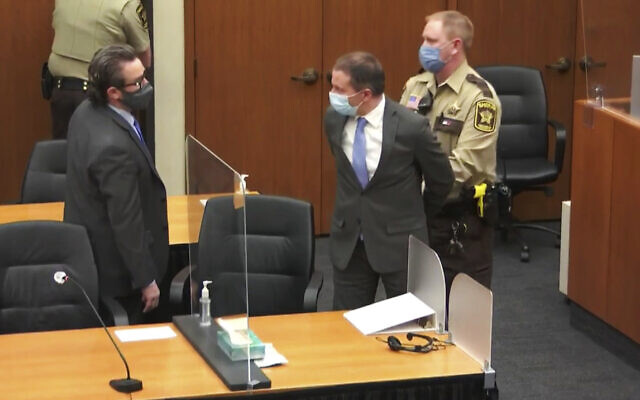 In this image from video, former Minneapolis police Officer Derek Chauvin, center, is taken into custody as his attorney, Eric Nelson, left, looks on, after the verdicts were read at Chauvin’s trial for the 2020 death of George Floyd, Tuesday, April 20, 2021, at the Hennepin County Courthouse in Minneapolis, Minn. (Court TV via AP, Pool)

Cahill delivered his rebuke after rejecting a defense request for a mistrial based in part on comments from California Rep. Maxine Waters, who said “we’ve got to get more confrontational” if Chauvin isn’t convicted of murder. He conceded to Chauvin’s attorneys that Waters’ comments could potentially be grounds for an appeal.

On Monday, Cahill ordered that jurors be sequestered in an undisclosed hotel during their deliberations and instructed them to avoid all news about the case.

Despite Cahill’s remarks, Brock Hunter, a criminal defense attorney and past president of the Minnesota Association of Criminal Defense Lawyers, said he considered a successful appeal over remarks like Waters’ and Biden’s extremely unlikely.

“It’s inevitable that public officials are going to comment on a case and its impacts on communities,” he said. “Unless there is direct evidence that statements by a public official directly impacted a juror or jurors, I don’t think this even gets off the ground.”

On Capitol Hill, Republicans as well as Democrats said they were relieved at the verdict and predicted it could give momentum to policing reform legislation that has been proposed in both the House and Senate.

“I think the verdict just reinforces that our justice system continues to become more just,” said Tim Scott of South Carolina, the only Black Republican senator. “This is a monumental day in many ways, in my opinion.”

The Congressional Black Caucus watched the verdict together in the Capitol, and members hugged and fist pumped after the verdict was read. 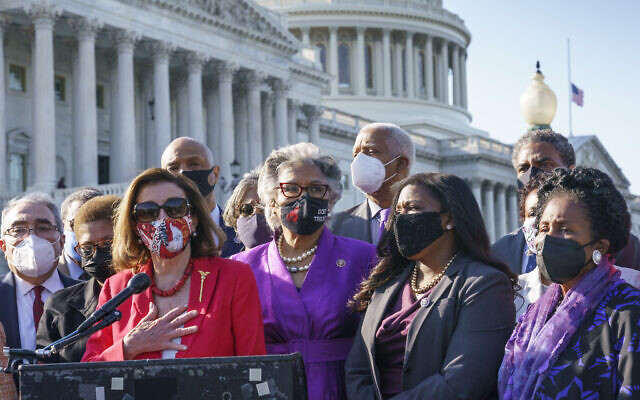 “The room was filled with emotion and gratitude,” said Georgia Rep. Hank Johnson. “Black lives mattered to this jury. And I’m very gratified at the verdict, very happy at the swiftness of the verdict. … It’s a vindication of justice in America.”

House Speaker Nancy Pelosi joined the Black Caucus shortly afterward at a news conference outside, where she said she had spoken to Floyd’s family just before the verdict. She said she called “to say to them, ‘Thank you, God bless you, for your grace and your dignity, for the model that you are appealing for justice in the most dignified way.’”