The Biden administration has decided to withhold some military assistance to Egypt due to human rights concerns, according to reports Monday.

Of the $1.3 billion in American military aid given each year to Cairo, $300 million is conditioned on Egypt meeting certain human rights standards, though administrations have typically issued a waiver to allow the assistance to be transferred.

US Secretary of State Antony Blinken is planning on issuing a waiver for $170 million in aid, Politico reported, with the remaining $130 million frozen unless Egypt meets benchmarks on human rights.

Unnamed officials told the Washington Post those conditions include ending prosecutions of rights and civil society groups, as well as the dropping of charges against 16 individuals whose cases the US has raised with Egypt.

“If they complete the human rights criteria that we laid out for the Egyptians, they also get the $130 million,” a US official was quoted as saying.

There was no official response from the administration to the reports, which described the move as a middle ground between calls to get tough on Cairo for alleged rights violations and Egypt’s role as a key US regional partner.

The reports came the same day that Egyptian President Abdel Fattah al-Sissi hosted Prime Minister Naftali Bennett for talks in Sharm el-Sheikh, the first time in a decade an Israeli premier has met publicly in Egypt with the country’s leader.

Bennett thanked Sissi for Egypt’s “important role in the region,” noting that after more than four decades, the peace agreement between Israel and Egypt “continues to serve as a cornerstone in Middle East security and stability,” according to a readout from his office.

Bennett also emphasized the “significant role” that Egypt plays in “maintaining security stability in the Gaza Strip,” as well as in helping to secure the release of the two Israeli civilians and the bodies of two Israeli soldiers held by Hamas.

Earlier this month, The Times of Israel reported Israeli officials have cautioned their counterparts in the Biden administration against being overly critical of the Egyptian and Saudi governments, over concerns such criticism could drive them to seek support from countries like Iran, China and Russia. 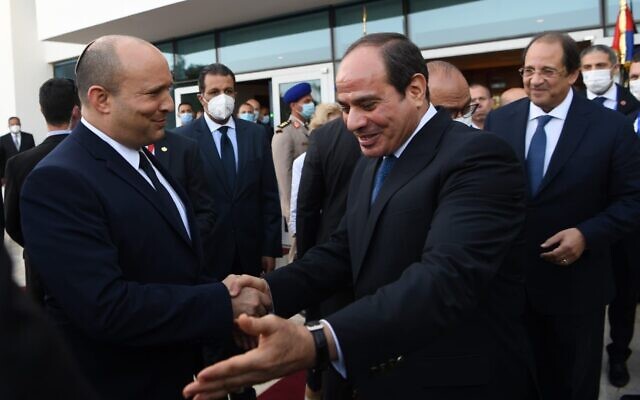 Biden entered office vowing to place a premium on human rights in the crafting of his foreign policy, warning that countries such as Egypt and Saudi Arabia would need to reform if they wanted to maintain their longstanding relationships with the US.

But that approach has worried Jerusalem, which believes it could alienate Sissi and Saudi Arabia’s Crown Prince Mohammad bin Salman, leading them to look elsewhere for support and alliances. Those concerns have been passed along to administration officials on multiple occasions, said a source familiar with the matter, who spoke on the condition of anonymity.

Israel views Saudi Arabia and Egypt as part of a more moderate axis of Arab countries in the region with which it seeks to cooperate against Iran, and has been reported in the past to lobby the US in support of economic aid for both countries.