WASHINGTON (AFP)  — US President Joe Biden said Friday that social media misinformation about Covid-19 and vaccinations is “killing people” and the White House said Facebook needs to clean up its act.

The White House is turning up the pressure on social media companies to weed out what officials say is widely spread misinformation on coronavirus vaccinations.

According to US health officials, a current spike in Covid-19 deaths and illnesses around the country is almost exclusively hitting people who remain unvaccinated.

“There is a clear message that is coming through: this is becoming a pandemic of the unvaccinated,” Centers for Disease Control and Prevention director Rochelle Walensky told reporters on Friday.

Many of those refusing vaccinations, despite the ease of availability throughout the United States, have said they do not trust the shots.

Skepticism is being fueled both by false posts spread by anti-vaccine activists online and by Republican politicians claiming the vaccinations are part of attempts at government control.

In this May 19, 2021 file photo, Centers for Disease Control and Prevention Director Dr. Rochelle Walensky testifies during a Senate Appropriations Subcommittee hearing on Capitol Hill in Washington. (Jim Lo Scalzo/Pool via AP)

White House Press Secretary Jen Psaki said that Facebook and others are not doing enough to push back.

“Everybody has a role to play in making sure there’s accurate information,” she said.

Psaki said the White House was taking a more active approach in calling out what it sees as misinformation but insisted that Facebook in particular should react more quickly in taking down problematic posts.

“There’s about 12 people who are producing 65 percent of anti-vaccine misinformation on social media platforms. All of them remain active on Facebook, despite some even being banned on other platforms,” Psaki said, without identifying those dozen posters.

The White House has “proposed that they create a robust enforcement strategy that bridges their properties and provides transparency about the rules,” she said.

The turning up of the volume against fake news immediately drew accusations from right-wing media that Biden was installing a “Big Brother” type surveillance over citizens’ opinions. 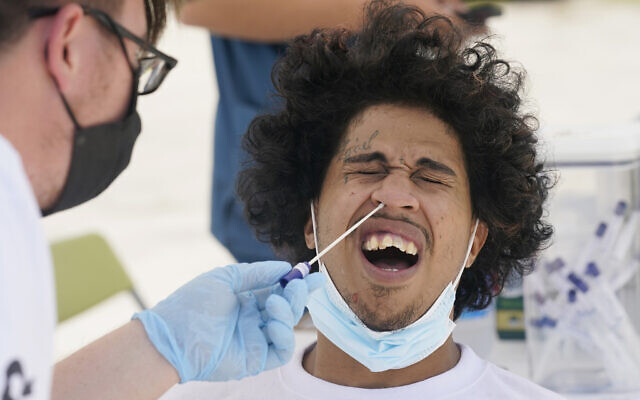 Facebook, which has contracted an army of independent outside fact checkers, including from AFP, to try and clean up its content, denied sitting back on false coronavirus posts.

Facebook on Friday rejected criticism by Biden, saying its efforts to get facts out are actually saving lives.

“We will not be distracted by accusations which aren’t supported by the facts,” Facebook said of Biden’s barb.

More than two billion people have viewed authoritative information about Covid-19 and vaccines on Facebook, which is more than any other place on the internet, according to the leading social network.

The company earlier said it is taking “aggressive action against misinformation about Covid-19 and vaccines to protect public health,” a spokesman said.

The CDC reported more than 33,000 new cases in the United States on Thursday, bringing the seven-day average up to 26,306, a 70 percent rise on the week before.

The new wave is driven by the Delta variant, which now accounts for more than 80 percent of new cases, according to the covSpectrum tracker.