WARM SPRINGS, Georgia (AP) — Joe Biden traveled Tuesday to the hot springs town where Franklin Delano Roosevelt coped with polio to declare the US is not too politically diseased to overcome its health and economic crises, pledging to be the unifying force who can “restore our soul and save this country.”

The Democratic presidential nominee offered his closing argument with Election Day just one week away while attempting to go on the political offensive in Georgia, which hasn’t backed a Democrat for the White House since 1992. He promised to be a president for all Americans regardless of party, even as he said that “anger and suspicion is growing and our wounds are getting deeper.”

“Has the heart of this nation turned to stone? I don’t think so,” Biden said. “I refuse to believe it.”

While Biden worked to expand the electoral map in the South, US President Donald Trump focused on the Democrats’ “blue wall” states that he flipped in 2016 — Michigan, Wisconsin and Pennsylvania — and maintained a far busier travel schedule taking him to much more of the country.

At a cold, rain-soaked rally in the Michigan capital of Lansing, Trump said that Biden supported the North American Free Trade Agreement and China’s entry into the World Trade Organization, both of which he said hurt the auto industry and other manufacturing in the state.

“This election is a matter of economic survival for Michigan,” the president said, arguing that the state’s economy was strong before the coronavirus pandemic hit. “Look what I’ve done.”

Trump also cheered Senate candidate John James — who may ultimately have a better chance of winning the state than the president — while attacking Michigan Gov. Gretchen Whitmer for moving aggressively to shut down much of the state’s economy to slow the virus’ spread. He even seemed to cast doubt on federal authorities breaking up what they said was a plot to kidnap her, which Whitmer has argued Trump’s “violent rhetoric” helped spark.

“It was our people that helped her out with her problem. And we’ll have to see if it’s a problem. Right?” Trump said. “People are entitled to say ‘maybe it was a problem. Maybe it wasn’t.’”

Biden, even as he predicted the country could rise above politics, went after his election rival, accusing Trump anew of bungling the federal response to the pandemic that has seen new cases surging in many areas, and failing to manage the economic fallout or combat institutional racism and police brutality that have sparked widespread demonstrations.

“The tragic truth of our time is that COVID has left a deep and lasting wound in this country,” Biden said, scoffing at Trump’s pronouncements that the nation is turning a corner on the virus. He charged that the president has “shrugged. He’s swaggered. And he’s surrendered.” 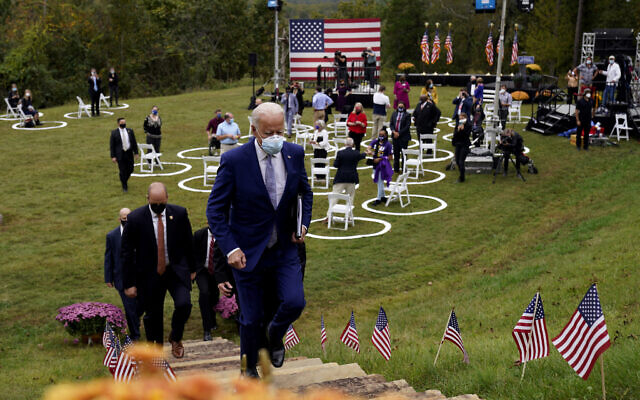 Venturing into Georgia was a sign of confidence by the Biden team, which is trying to stretch the electoral map and open up more paths to the needed 270 Electoral College votes. The former vice president plans to travel to Iowa, which Trump took by 10 points in 2016, later in the week. And his running mate, California Sen. Kamala Harris, is hitting Arizona and deep red Texas.

Besides Lansing, Trump was traveling to West Salem, Wisconsin. First lady Melania Trump was on the road, too, making her first solo campaign trip of the year in Pennsylvania. And Vice President Mike Pence was in South Carolina, maintaining his campaign schedule despite several close aides testing positive for the coronavirus last weekend. There, Republican Sen. Lindsey Graham is in a potentially tight reelection race.

Hillary Clinton flirted with GOP territory in 2016, only to lose traditional Democratic Midwestern strongholds. But a top Biden adviser rejected the notion that the campaign is spreading itself too thin, noting that the former vice president’s visit follows weeks of paid advertising in Georgia and visits by Harris and the candidate’s wife, Jill Biden.

Biden will also visit in coming days Wisconsin, Michigan and Florida, where former President Barack Obama gave a speech in Orlando on Tuesday, blistering Trump as only worrying about the virus because it was dominating news coverage.

“He’s jealous of COVID’s media coverage,” Obama said. “If he had been focused on COVID from the beginning, cases wouldn’t be reaching new record highs across the country this week.” 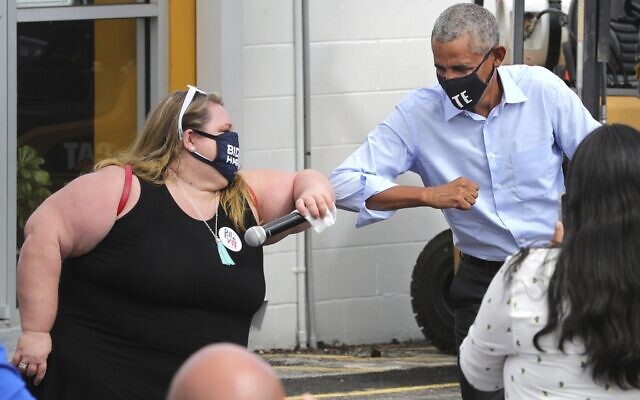 Former President Barack Obama gets an elbow-bump welcome during a stop at a Biden Victory Center to thank volunteers in Orlando, Fla., Tuesday, Oct. 27, 2020. Earlier in the day, Obama rallied Biden supporters at a drive-in rally at Tinker Field in Orlando. (Joe Burbank/Orlando Sentinel via AP)

Trump expressed his displeasure that Fox News carried his Democratic predecessor’s speech live, complaining to reporters about it and tweeting the network was “playing Obama’s no crowd, fake speech for Biden.”

In Atglen, Pennsylvania, Melania Trump said she was feeling “so much better now,” just weeks after being diagnosed with the virus. She slammed Biden’s “socialist agenda,” praised her husband as “a fighter,” and also commented on the president’s use of social media.

“I don’t always agree the way he says things,” she said, drawing laughter from the crowd, “but it is important to him that he speaks directly to the people he serves.”

The Trumps left for their campaign trips at the same time, and the president gave the first lady a quick peck on the cheek before they boarded separate planes.

The president will also visit Omaha, Nebraska, after a Sunday stop in Maine. That anticipates a razor-thin Electoral College margin since both areas offer one electoral vote by congressional district.

While Biden rarely travels to more than one state per day, the Republican president has maintained a whirlwind schedule, focusing on his argument that he built a booming economy before the coronavirus pandemic upended it. Trump is planning a dizzying 11 rallies in the final 48 hours before polls close. 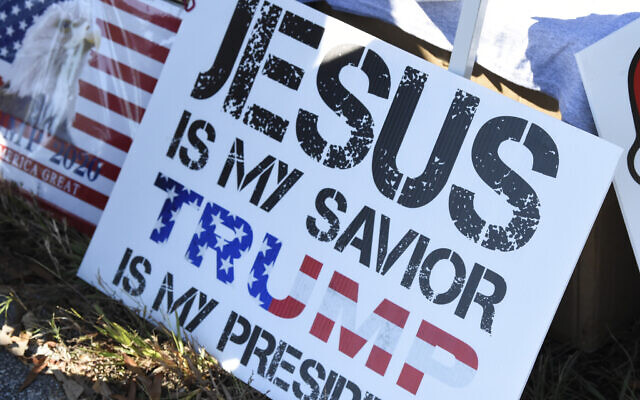 A sign for sale outside a campaign rally featuring Vice President Mike Pence and US Sen. Lindsey Graham of South Carolina on Tuesday, Oct. 27, 2020, in Greenville, S.C. (AP Photo/Meg Kinnard)

His latest swing is also something of a victory lap after the Senate on Monday approved the nomination of Amy Coney Barrett to give conservatives a commanding 6-3 advantage on the Supreme Court. Trump has sought to use the vacancy created by the death of Justice Ruth Bader Ginsburg lo animate conservative evangelical and Catholic voters, though the high court fight has been overshadowed by concerns over the coronavirus with cases surging.

Biden, meanwhile, is hoping to lift Democrats running for Senate in Georgia and Iowa. He was visiting Atlanta after his address in Warm Springs, where Roosevelt sought treatment while governing a nation weathering the Great Depression and World War II.

“This place, Warm Springs, is a reminder that though broken, each of us can be healed,” Biden said. “That as a people and a country, we can overcome a devastating virus. That we can heal a suffering world. That, yes, we can restore our soul and save our country.”

His appearance was meant to bookend his visit earlier this month to Gettysburg, Pennsylvania, when Biden used the site of the bloody Civil War battle to issue a call for putting country ahead of party. On Tuesday, he evoked Roosevelt’s New Deal sensitivities to say he could harness the power of the government to move the country forward.

“If you give me the honor of serving as your president, clear the decks for action,” he said. “For we will act.”