The Knesset on Wednesday advanced legislation requiring DNA samples taken from victims of sex crimes to be stored for an unlimited period of time, despite 51 opposition lawmakers voting against the bill.

Lawmakers from the predominantly Arab Joint List party voted alongside the coalition, ensuring the legislation passed its preliminary reading despite the absence from the plenum of a number of government MKs. There were 64 votes in favor of the bill.

The bill proposes that all samples taken from the victims of sex crimes in the aftermath of an assault be sent to the Abu Kabir Forensic Institute where the DNA would be extracted. The DNA would then be stored with no time limit for the purpose of future investigation and prosecution of attackers.

Under current regulations, the forensic samples are destroyed after just three months if no complaint is filed with police. Victims of sexual assault often don’t report the crime immediately, sometimes taking months or even years before speaking to law enforcement.

“The law today allows for a complaint to be filed for a sex crime years after it was committed, and in the case of sex crimes committed against minors, even dozens of years later,” the legislation read. “Preserving the samples without a time limit will help to create a fair system for victims filing a future complaint.”

The legislation also requires that so-called rape kits be available in all hospitals for medical teams to take samples from victims of assault. Currently, they are only provided to five hospitals, Haaretz reported.

A plenary session at the Knesset in Jerusalem, July 14, 2021 (Yonatan Sindel/Flash90)

The sponsor of the legislation, Yesh Atid MK Merav Ben Ari, said she was stunned that the opposition would put partisan politics ahead of the needs of victims of sex crimes.

“I cannot believe that members of the opposition would put their considerations before those of sexual assault victims,” Ben Ari tweeted. “I shouted at them in the plenum — the shame of it. The law passed by a large majority of 64 — Arabs, Jews, secular, religious — we are all in favor of it.” 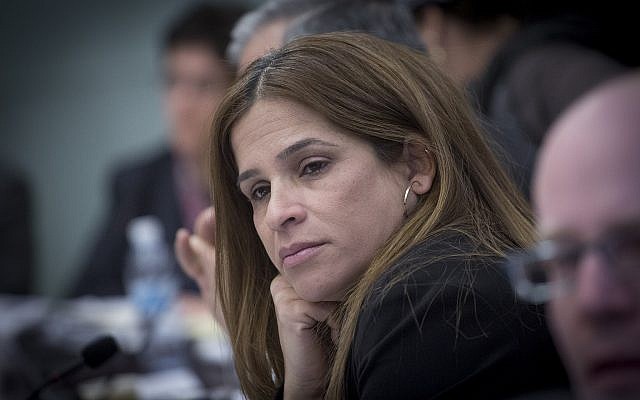 MK Merav Ben Ari attends a meeting in the Knesset in Jerusalem, on February 6, 2017. (Miriam Alster/FLASH90)

While she spoke in the plenum, Ben-Ari was interrupted by Likud MK Yoav Kisch.

“It’s impossible to do anything with you people,” he shouted, according to Haaretz, claiming the coalition “violates every agreement.”

In the wake of the vote, Meretz MK Yair Golan expressed his outrage that the opposition had voted against the bill.

“All opposition MKs, with the exception of the Joint List, voted against the law extending the time limit for preserving forensic evidence of victims of sexual assault,” Golan tweeted on Wednesday. “How dare they? Do they have no wives, daughters and sisters? Are they in favor of sex offenders? They are the opposition to rape victims.”

However, Likud MK Miki Zohar on Thursday defended the votes of the opposition, saying that although regrettable, it was for the sake of undermining of the new government.

“It is a pity that I had to oppose, it is a very important thing. But there is something more important than anything – that the State of Israel be led by people fit to do so,” Zohar told Army Radio.