WASHINGTON — US Secretary of State Antony Blinken on Monday was to insist that the Biden administration had prepared for worst-case scenarios in Afghanistan as he faced irate lawmakers.

The famously mild-mannered top US diplomat was expected to face two days of contentious grilling before Congress, the first opportunity for political rivals to directly challenge the administration over the Taliban’s swift win, as President Joe Biden ended the 20-year US military mission.

Blinken was to tell the House Foreign Affairs Committee that the Biden administration was “intensely focused” on the safety of Americans and had been “constantly assessing” the staying power of the Western-backed government, “considering multiple scenarios.”

“Even the most pessimistic assessments did not predict that government forces in Kabul would collapse while US forces remained,” Blinken was to say, according to prepared remarks.

“Nonetheless, we planned and exercised a wide range of contingencies,” he said.

“The evacuation was an extraordinary effort — under the most difficult conditions imaginable — by our diplomats, military, and intelligence professionals.”

In this image provided by the US Marine Corps, soldiers with the 82nd Airborne Division assist evacuees during an evacuation at Hamid Karzai International Airport, Kabul, Afghanistan, August 25, 2021. (Staff Sgt. Victor Mancilla/ US Marine Corps via AP)

Blinken said that prior planning made it possible to draw down the embassy within 48 hours, and secure the airport and start evacuations within 72 hours.

The United States and its allies ultimately evacuated 124,000 people out of Afghanistan, one of the largest airlifts in history.

Lawmakers of the rival Republican party, seeing a vulnerability for Biden, have portrayed the operation as chaotic and accused the president of abandoning Americans to the fate of the Taliban.

Representative Mike Waltz and Senator Lindsey Graham, in a joint statement last week, said it was “inexcusable that the Biden administration allowed a terrorist regime to dictate the terms of allowing Americans to leave on their own with their families.” 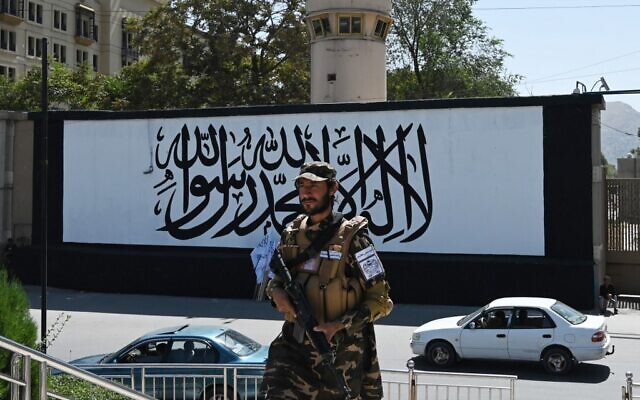 A member of the Taliban Fateh, a ‘special forces’ unit, stands guard outside the US embassy in Afghanistan displaying a Taliban flag in the outer concrete wall in Kabul on September 8, 2021. (Aamir QURESHI / AFP)

The administration says only around 100 US citizens remain and that all had been contacted repeatedly by US diplomats, with some leaving after the withdrawal in line with promises by the Taliban.

Blinken, in the prepared remarks, stressed that former Republican president Donald Trump agreed to the withdrawal deal with the Taliban last year.

He repeated Biden’s contention that the president had a choice between carrying out the pullout or sending more US troops into Afghanistan, putting them in harm’s way and perpetuating America’s longest war.

“There’s no evidence that staying longer would have made the Afghan security forces or the Afghan government any more resilient or self-sustaining,” Blinken was to say.

“If 20 years and hundreds of billions of dollars in support, equipment, and training did not suffice, why would another year, or five, or 10, make a difference?”