A Border Police officer wounded during violence along the border with Gaza more than a week ago died of his wounds at Soroka Medical Center in Beersheba Monday afternoon, hospital officials said.

Barel Hadaria Shmueli, 21, had been fighting for his life since being shot in the head at close range by a Gazan attacker as he guarded the border on August 21. His plight had attracted nationwide attention and mass vigils outside his hospitals took place nearly nightly.

“The medical team fought for his life and he underwent multiple surgeries during his hospitalization,” Soroka hospital said in a statement. “Despite the intense efforts, due to his serious injury the medical staff was forced to determine his death. We share in the heavy grief of his family.”

The announcement of Shmueli’s death drew an outpouring of condolences from leaders, politicians and others.

“There are no words to comfort his family amid their deep grief,” said Prime Minister Naftali Bennett. “Barel was a fighter in his life and a fighter in his death. He fought for his life until the last moment, as all of the people of Israel were praying for him.”

Shmueli was wounded last Saturday night as Gaza rioters at a Hamas-run rally surged toward the security fence. In videos from the scene, rioters could be seen attempting to destroy and then snatch a soldier’s gun as it poked through a hole in the concrete wall. One man could then be seen running up to the wall, taking out a gun that had been tucked in his waistband and firing three shots through the hole at point-blank range. One of the rounds struck Shmueli in the head.

Palestinians clash with Israeli troops during a protest at the Israel-Gaza border, east of Gaza City, on August 21, 2021. (Abed Rahim Khatib/Flash90)

Initial findings from the military’s investigation into the violence along the Gaza border on Saturday indicated that the troops were unprepared for the sudden rush of rioters toward the security fence. The soldiers stationed on the border did not immediately open fire at the masses that suddenly attacked the fence, out of concern that they might hit civilians who were in the area, a military official said.

Rioters ran up to the border so quickly that Shmueli and the other soldiers with him apparently did not know how close they were until they reached the concrete wall being used for cover, despite the ample reconnaissance equipment on the border, including drones and powerful surveillance cameras, an official said.

“Barel Hadaria Shmueli, one of the best this country has, fell in defense of the homeland and the residents of the south,” said Defense Minister Benny Gantz. “On behalf of the defense establishment, I send heartfelt condolences to his parents and family.”

Public Security Minister Omer Barlev said his “heart breaks with the news of the death of Barel Hadaria Shmueli… my condolences to the bereaved family, to the Border Police and to the Israel Police.”

During Shmueli’s nine-day hospitalization, his condition became a political football as his family lobbed criticism at Bennett and the military brass. 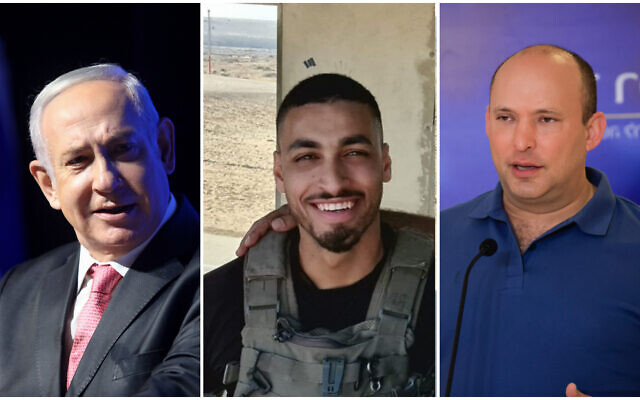 “My son is fighting for his life, his blood, his breath, for nothing,” Nitza Shmueli, his mother, told 103 FM Radio a week ago. “The country isn’t worth it, and I’m not getting any answers. A 12-year-old terrorist shoots him point blank, and all this knowing that our fighters were not allowed to shoot and respond. Why did they send my son? Why? I want an answer.”

Nitza slammed Bennett for not visiting her son in the hospital, and criticized him for confusing her son’s name with that of his father when he called.

Bennett later apologized for confusing Barel’s name with that of his father, Yossi, saying it “was an honest mistake, and I apologize for that from the bottom of my heart.” Former prime minister Benjamin Netanyahu, who also spoke to the family, publicly criticized Bennett for the mistake but later backtracked.

Violence has simmered along the Gaza border in recent weeks, with sporadic rocket attacks and increasingly frequent border riots and airborne arson attacks by Palestinians and reprisal airstrikes by Israel. 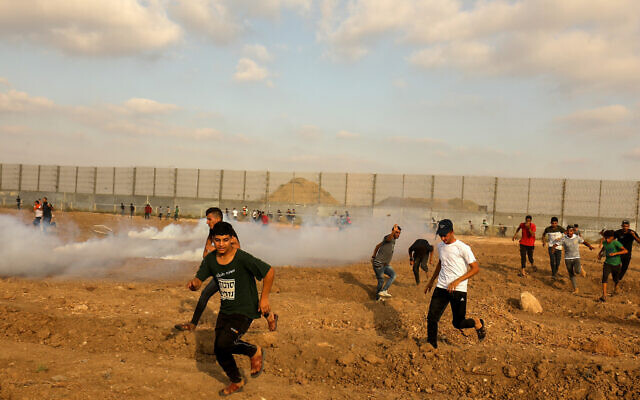 Palestinians clash with Israeli forces during a riot on the Gaza border, east of Gaza City, on August 21, 2021. (Abed Rahim Khatib/Flash90)

The IDF is probing several aspects of the violence on August 21, from how troops were deployed along the border to the exact lead-up to the shooting and how the forces responded to it, including the amount of time that lapsed until Shmueli was brought to the hospital.