BOSTON (JTA) – Days after a series of violent acts stunned Greater Boston and threatened its Jewish community, residents are jolted but resolute, vowing to continue taking pride in their Jewish identity.

The latest incident occurred on Thursday, when Chabad Rabbi Shlomo Noginski was stabbed eight times outside of Shaloh House, a Jewish school and synagogue in Brighton, where he teaches.

Less than a week prior, on June 26, in Winthrop, a seaside town just north of Boston, a white supremacist who harbored virulent racist and antisemitic views murdered Air Force veteran Ramona Cooper, 60, and retired state trooper David Green, 68, both African American. The shooting took place near two synagogues and is being investigated as a hate crime.

Both episodes of violence played out during a period of high alert in the area following a June 24 pro-Palestinian protest at the New England regional offices of the Anti-Defamation League in Boston, at which a non-Jewish writer for the Zionist website CAMERA was, according to video, spat at and called a Nazi by protesters. The local Jewish Journal-Massachusetts wrote in an editorial that the ADL encounter and the double murder were both “high-profile instances of antisemitism and hate.”

All three incidents worried local and national Jewish groups, but it was the attack on Noginski that proved to be the tipping point for many Jewish Bostonians. With only hours of advance notice, hundreds of people gathered Friday morning in Brighton for a rally in support of Noginski, drawing a wide swath of Greater Boston’s Jewish community, its allies and scores of elected leaders, police and officials.

“Our community is feeling vulnerable,” Marc Baker, president of the Combined Jewish Philanthropies of Greater Boston, said at the rally. “And we are feeling angry, wondering whether we can be safe in our own country, and our own cities.”

Organized by Shaloh House, CJP, the Jewish Community Relations Council of Greater Boston and the New England branch of the ADL, the rally was held across the street from the school and synagogue where Noginski was attacked. The Russian-born rabbi, an Israeli citizen and father of 12, was released Friday from the hospital.

Police apprehended the alleged attacker, Khaled Awad, who is being held without bail until a hearing scheduled for July 8. Former friends and college roommates of Awad’s, including a Jewish roommate, have described him as “violent” and “very antisemitic.”

Suffolk County District Attorney Rachael Rollins is investigating both the stabbing and the shootings. She has launched a civil rights investigation to determine if the stabbing of Noginski was a hate crime.

Rollins has also sought to alert the Jewish community to the antisemitic leanings of the Winthrop shooter, 28-year-old Nathan Allen, noting that his personal writings revealed racist and antisemitic views, including drawings of swastikas, and that he may have been looking to target Jews in addition to Black people. Allen had no prior criminal record and was killed by police at the scene. 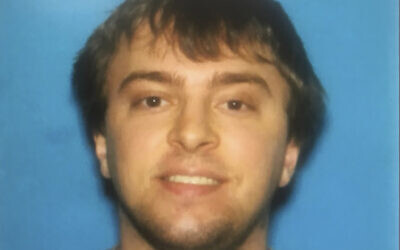 “There is no more powerful and hateful a symbol than a swastika,” Rollins told the Jewish Telegraphic Agency. “When we saw that in the writings, in his own hand, he has said who he is. I know it’s scary to hear, but I feel compelled to tell people there are individuals who hate and want to harm [them].”

Details like these have shocked the local Jewish community. Winthrop resident Denise Mahoney, a member of the nondenominational Temple Tifereth Israel, had gone to school with Green, one of the victims, and remained friends in their close-knit town. News of his murder had been “devastating,” she said.

But attendees at Friday’s rally sought to project a resilient face.

His message was reinforced by Rabbi Dan Rodkin, executive director of Shaloh House.

“We are not going to sit back,” Rodkin said. “We will make sure to send a strong message: Evil has no place in America.”

Noginski himself told the media on Sunday, “If people want to see a miracle, they should look at me.”

Speaking in Hebrew with a translator, Noginski described his harrowing ordeal in more detail, the Boston Globe reported. He said the armed attacker had been trying to force him into the school’s van, leading Noginski to fear that he was being kidnapped. At an opportune moment, Noginski said, he ran across the street to draw the attacker away from the school, where kids were in summer camp.

In recovery, the rabbi said he is doubling down on bringing goodness and light into the world, by teaching and by helping more people. “And that will help me heal, and help the entire environment around me,” he told reporters.

More than a quarter of Greater Boston’s approximately 248,000 Jewish households live in Brighton and the contiguous communities of Brookline and Newton, according to the 2015 Greater Boston Jewish population study conducted by the Cohen Center for Modern Jewish Studies at Brandeis University.

“Yesterday’s attack left the rabbi injured and our community shaken,” said Boston’s acting Mayor Kim Janey. “An attack on any member of [our] community is an attack on all of us.”

The attack drew support for Noginski and condemnation against antisemitism from many leaders, including Massachusetts Sen. Elizabeth Warren and Boston Cardinal Séan Patrick O’Malley. 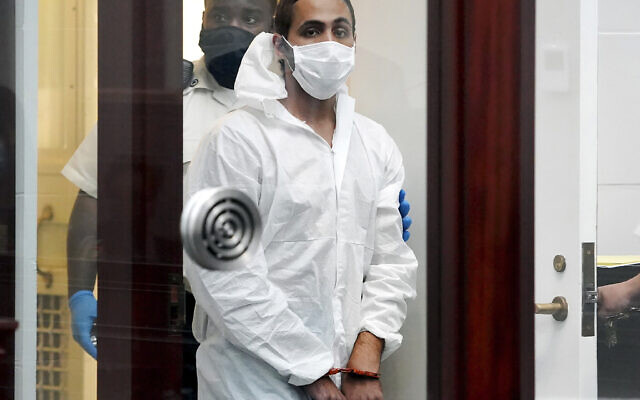 Khaled Awad is led into court while arraigned on charges in the stabbing of a rabbi near a Jewish day school, in Brighton District Court in Boston, Friday July 2, 2021. (Mary Schwalm/The Boston Herald via AP, Pool)

Nina Baron, a 26-year-old Bostonian, was upset by the attack on the rabbi and accompanied her father to the rally. Growing up in a suburb, she didn’t have that many concerns about antisemitism, she told JTA at the rally.

“This time in America is different for all marginalized groups. But as a Jew, I definitely feel different than I used to,” she said.

In the Winthrop case, where there were no Jewish victims, Robert Trestan, director of the New England ADL, said he believes, as Rollins does, that sharing details of the shooter’s antisemitic leanings is important. “What we learn from the investigation may help prevent future attacks,” Trestan told JTA.

Trestan, who has seen some of the writings, said they caused him “a bit of a shudder, to see the written words of someone who killed two people and likely was ready to kill more for no other reason than the hatred that was in his head. His writing confirms his motive.”

While the number of antisemitic incidents in Massachusetts and across New England decreased in 2020, the year of the COVID-19 pandemic, incidents against American Jews nationwide remain historically high, according to the ADL.

Rollins has taken the antisemitic angle of this incident very seriously, according to Josh Schreiber, the rabbinic intern at Tifereth Israel.

“She could have very easily downplayed this,” he said.

Many Tifereth Israel congregants attended a vigil in support of the victims’ families, where Schreiber gave the opening remarks.

“One of the strongest responses through a Jewish lens is for us to be part of the broader community,” he said. Schreiber told JTA the synagogue will receive a grant from the CJP to bolster security.

Mahoney was alarmed when she heard from her son, a transit police officer, that the shooting was fueled by racism and antisemitism.

But she will not heed her son’s suggestion that she tuck her two Star of David necklaces inside her shirt to hide her Jewish identity, as some Jews in America have said they are considering doing. 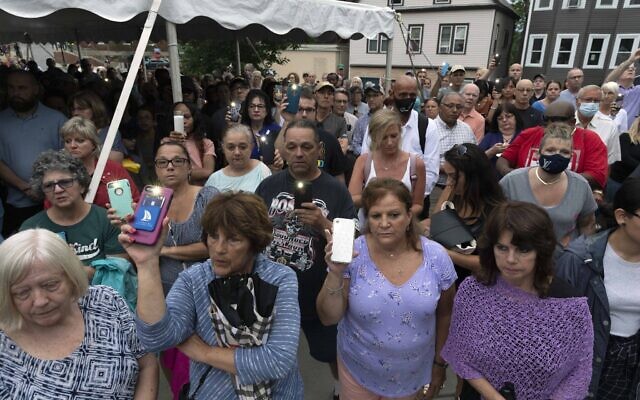 People attend a candlelight vigil for David Green and Ramona Cooper, Thursday, July 1, 2021, in Winthrop, Mass. Green and Cooper were each shot multiple times by Nathan Allen after he crashed a stolen box truck into a residential building not far from his condo. Allen was killed by police moments later. (AP Photo/Michael Dwyer)

“I am not going to allow someone’s hatred to change my behavior,” she said. “That would allow his hatred to win.”