In his first public remarks about the new government in Israel, Palestinian Authority President Mahmoud Abbas said Wednesday he is willing to work with “whoever the Israeli people choose.”

But Abbas said cooperation relies on Israel “stopping its aggression and so on” before progress can be made on final status peace negotiations.

Abbas delivered the speech on Monday at a multi-day conference of Fatah’s Revolutionary Council, a senior deliberative body in the Palestinian movement.

The PA has been wary of Prime Minister Naftali Bennett, saying in public comments that it expects to see Bennett pursue similar policies to those of former prime minister Benjamin Netanyahu. Bennett has been a vocal opponent of a Palestinian state.

“It is inaccurate to call it a “government of change,” unless one means to say that Netanyahu is no longer there. As for [the new government’s] policies, we estimate that will see no difference, or perhaps even worse ones, ” the Palestinian Authority Foreign Ministry said after Bennett’s government was sworn in.

Israel’s outgoing prime minister Benjamin Netanyahu shakes hands with his successor, incoming Prime Minister Naftali Bennett, after a special session to vote on a new government at the Knesset in Jerusalem, on June 13, 2021. (Emmanuel Dunand / AFP)

Palestinian opposition figures in the West Bank have also expressed skepticism that Bennett would herald a change in Israeli policies towards them.

“Again, the two of them are basically the same,” former senior Fatah official and Abbas critic Nasser al-Kidwa said two weeks ago, referring to Netanyahu and Bennett.

Abbas also praised what he called the “popular resistance” practiced by residents of the West Bank Palestinian town of Beita, near Nablus.

Palestinians from Beita have been protesting the illegal outpost of Evyatar, recently erected by settlers on a nearby hilltop.

Beita’s residents claim local Palestinians have historically cultivated the area. The Civil Administration, an Israeli military body, says the land is “survey land,” meaning that it has not yet determined who owns the plot. 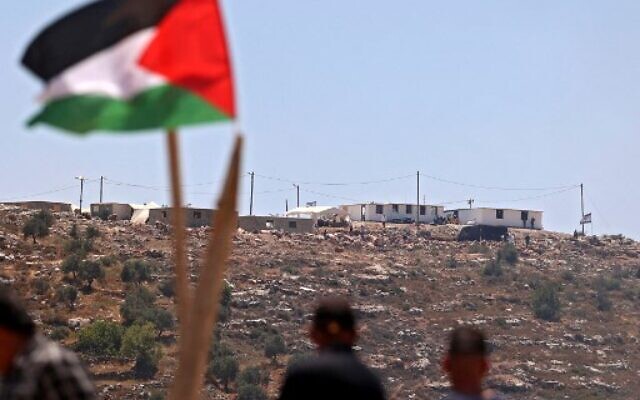 Palestinian protesters attend a demonstration against the Evyatar settlement outpost, south of Nablus, on June 4, 2021, in the West Bank. (JAAFAR ASHTIYEH / AFP)

However, the IDF is poised to evacuate the outpost, pending an appeal by the settlers to the Supreme Court.

Four Beita Palestinians have been killed so far in clashes between Israeli soldiers and Palestinian protesters near the outpost. Palestinians have hurled stones, shot fireworks, and set swathes of land ablaze. Israeli troops have responded with rubber bullets, tear gas, and, in some cases, live fire.