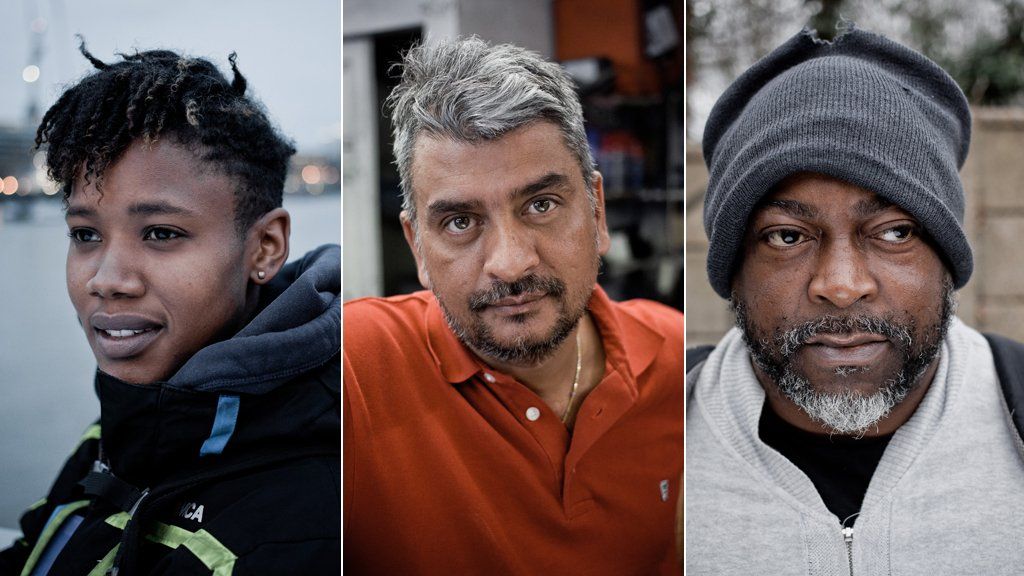 Britain’s Prime Minister Theresa May has signed the letter that will formally begin the UK’s departure from the European Union, following June’s referendum which resulted in a vote to leave the EU.

To mark this moment, Polish photographer Piotr Malecki has flown into London and is making his way from the outskirts of the capital to the centre, capturing the mood and the thoughts of some of those he meets.

Justine, British, with her young son

“I think Brexit is sad and I feel sorry for those people who don’t really know what’s happening, who are thinking they should leave the country. There are some mums at school who are really lovely, really involved with the school, great kids – and they’re just thinking that they might have to move. They don’t know whether they should get ahead of the game or stay, which is sad for the community.”

“Personally, I’m sad for my children that they can’t be a part of Europe as I grew up. It’s a shame.”

“As long as I can work, I don’t see any problem.

“You know, we work legally, we pay taxes. I hope they won’t see any problem in us being here, why would they? I came here to work, in 2010.

“As long as they won’t close the borders, it’s OK.”

“I felt insecure three months ago and I still do. I don’t understand it, I don’t know what they’re fighting for, I don’t know what’s going to happen. I think they’re just trying to scare us, but, in reality, nothing will change.

“They can’t just get rid of us, because who’s going to work here? Who? Tell me. And who’s going to pay taxes? All this big business, shops, services, they are Polish.

“What will happen in the future?”

“I just finished nights so I’m just going to sleep a little bit and then later on I’ll go and pick up my children from school.

“If we’re in the EU or not, nothing changes for me.”

“I voted to stay.

“We should be making bridges, not demolishing bridges. That’s my view on life. You know, we’re all the same. We may have different beliefs, different views. But at the end of the day, we want the same thing in life which is to raise our families in peace an harmony.

“What else do we want in life? Care, a little bit of consideration to our health service, our roads, our infrastructure. You know, these things are important but we allow silly prejudice to blind us from what we really need in life. What else can I add to that really.”

“Well, I think the country is a bit undecided – still. But we’ll see how it goes. You know, we’re an ambitious country. We like to put our first foot forward and see where we land.

“We’re still not sure, we’re undecided. But we made a statement, to see what’s going to progress, maybe by not going in. That’s what I can tell you for the meantime.”

Abraham, British, with his children

“My wife works. I’m looking after the kids.

“I know it’s Brexit, but I’m not really sure what that means for anyone. I don’t think it’ll really affect me much.”

“When I was new in this country I didn’t see that many people in the train, or buses. Nowadays, it’s a nightmare, forget about sitting down in the train, especially at six in the morning.

“If you go in the train – the people, the way act and they way talk – it’s not like England anymore. They’re shouting, on the phone. There are so many good people, so many hardworking, very nice people. I’m not blaming anything or anyone – I’m seeing the difference.”

“I haven’t got any national motives – just plain common sense. I mean, I have a lot of children out of the country. I have to send them money. If sterling is weak, I have to send more. That’s one thing. We, as a Jewish community, have a lot of food that is imported, because it has to be kosher. It’s done in the USA, in Israel, wherever. All the food is going up, because it comes from outside. The sterling is weak, all the prices of the food are up.”

The City of London

“I’m happy being part of the EU because you feel more united.

“I’ve met so many people from out of London who have actually created the culture in London. They work hard hours. They work in positions that Londoners are not working in, so I’d like to know how they will be replaced. That’s the reason why I’m against Brexit.

“There’s been a lot of good that’s come out of being united.”