Meron rescuers are reeling. They are the men and women who were ready for anything — but not for this.

They are some of the toughest members of this hardy nation. They take war and terror attacks in their stride. But the scene on Friday, when 45 Israelis were crushed to death and many more injured, was too much even for them.

“Some of our people started weeping and crying as they treated the injured, and had to move away,” an emotional Avi Marcus, head paramedic of the United Hatzalah emergency organization, which had hundreds of medics at the scene, told The Times of Israel in his Jerusalem office on Sunday.

The sheer scale of the scene, with tens of thousands of people shifting from joy to horror, mostly helpless to do anything but watch the death and injury unfold before their eyes, was too much for some rescuers to bear.

Israeli rescue forces and police at the scene after a mass fatality scene during the celebrations of the Jewish holiday of Lag Baomer on Mt. Meron, in northern Israel on April 30, 2021. (David Cohen/Flash90)

“They couldn’t carry on, they were simply broken,” he said. “With so many dead people in the same place, on top of each other, it brought up traumas among our people. Some of them said it prompted associations of the Holocaust, seeing hats and shoes that had come off people.”

And now, for many rescuers — those who finished the task and those who needed to bow out alike — the mental images are unshakable. “People haven’t been sleeping, haven’t been eating,” Marcus said. “They are disoriented, and we have even had wives and husbands of medics calling, worried and saying their partners have been crying.”

A debrief at Meron by Hatzalah’s psycho-trauma unit, which is under Marcus’s authority, started what will be a long process of addressing the psychological scars. Then on Saturday night, in 12 locations across Israel, Hatzalah medics met for the first in a series of group therapy sessions.

“We’re doing the sessions in the hope it will prevent PTSD,” said Marcus. “People mostly spoke about the feeling of overwhelming hopelessness and their experiences trying to save people.

“They asked, ‘How could it be that young kids were killed?’ There were lots of questions of why. And there were lots of people asking if they did the best they could. The reply we gave was that we all worked according to guidelines and did the best possible within the circumstances, and this gives a sense of reassurance.” 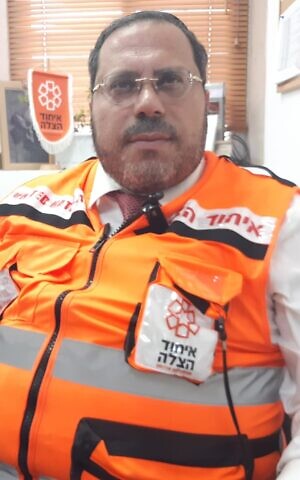 But a rational answer doesn’t always quiet the emotional turmoil. Uriel Belams, a 41-year-old Hatzalah volunteer medic, says he knows that all the rescuers, himself included, did their utmost. But he can’t stop thinking about a young boy, captured on videos that have circulated on social media, calling for help, and soon afterwards, dead.

Belams had seen the boy across the scene of chaos. “I ask myself whether, if it were my child, I would have done more,” he said sadly. “I was far away and to get to him I would have had to climb on people.”

While this could well have harmed others, Belams can’t stop thinking that “it was possible to save him, theoretically.”

He added: “The boy was asking for help but he died.”

As Marcus talked, during his intense interview, he shared the moment that is playing over and over in his mind. It was a moment that left him feeling like a “hangman.” 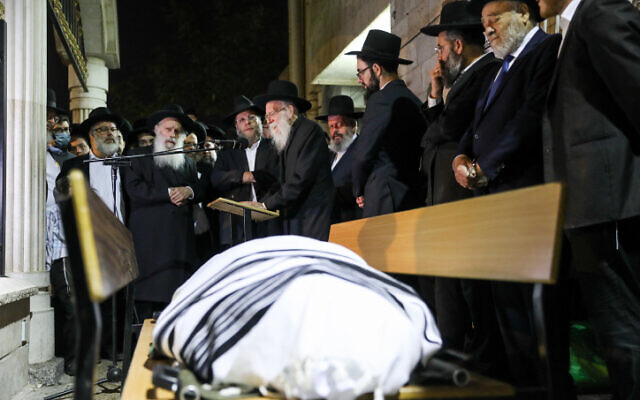 People attend the funeral of Yossi Kohn, one of the victims of the Meron tragedy, where 45 people were crushed to death, outside the Mir Yeshiva in Jerusalem, May 2, 2021. (Noam Revkin Fenton/Flash90)

He said: “The first I knew of the crisis was when I ran down to the first patient, a man gasping to breathe, and as I started CPR on him, we had no idea it was actually a mass casualty event. Soon, however, I started to understand that dead people were on top of one another, with medics trying to perform CPR.” 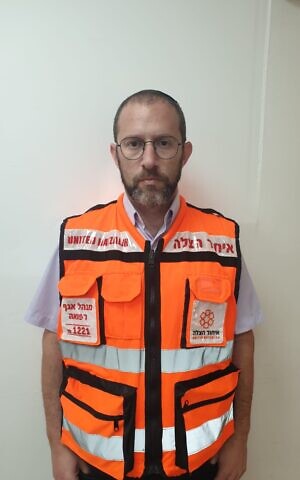 Marcus stood up at his desk and mimicked the calculation he made — in accordance with medical protocols — upon this realization. He pointed his finger, as if at a line of bodies, and said “dead, dead, dead, dead.” This was the judgment call he had to make in the midst of the tragedy — assessing that many of the motionless people would not be saved by CPR and instructing medics to stop trying and focus on others instead.

“I realized we couldn’t help the people that were unconscious or not breathing, and I had to instruct the medics to stop performing CPR on them, as there were more people breathing who needed help.”

He is sure it was the right decision, and one that ultimately saved lives, but this doesn’t eliminate the discomfort he feels at having needed to make the call. “It’s a very hard and traumatizing feeling to make that decision,” he stated. “I felt like a hangman, making decisions I should not have needed to make.”

Belams has expertise in emergencies from his professional life as well as his volunteering with Hatzalah. He works in the Education Ministry, helping to prepare institutions for emergency scenarios. “Nevertheless,” he said, “nothing prepares you for this.”

When he arrived home from the scene, he found himself oscillating between a sense of grief for those who had died and particular distress that some were children, on the one hand, and on the other, overwhelming gratitude that his kids are alive and well. “It keeps going around in my head,” he said. “When I got home I hugged my kids and expressed thanks they were there, and then I shed a tear for those who are no longer here and went to visit a family that lost a father.

“The kids were crying and I gave support. By the time I got home I couldn’t even fathom a thought. I had no strength left to think. Over Shabbat, I tried to keep the tears in, but I couldn’t, and I cried.”