Artificial intelligence is changing the world across a multitude of fields, and one startup is trying to use it for situations that require expert precision and delicacy — inside the operating room.

Theator, a startup based in Palo Alto, California with an R&D site in Tel Aviv, aims to bring AI to surgery. Earlier this month, the company announced that it had raised $15.5 million in a Series A funding round to grow what it calls its “surgical intelligence” platform. To date, Theator has raised $18.5 million.

The idea behind surgical intelligence is to power a “next-generation” operating room using AI and computer vision to extract and analyze key moments during surgery, giving surgeons significant insight into both their own operations and those of their colleagues.

Most patients fear surgery, but it is a critical and often unavoidable aspect of treatment. During an average 85-year lifespan, it’s estimated that an average American will undergo more than nine surgeries.

Theator was co-founded in 2018 by Dotan Asselman and Tamir Wolf. Wolf, with a background in health-tech, was hit by the realization that surgery is not always safe and affordable, and can be dramatically less successful depending where patients live. Even within a single city, one hospital can have far better resources than another down the street.

Wolf recalled being disappointed to find such inequities in the health sector in this day and age.

“The reason why we established Theator and decided to dedicate our lives to it, is really to tackle variability and disparity in the surgical world,” said Wolf, who is now the company’s CEO. “We’re hoping to do it by leveraging deep tech and understanding what best practices look like so that we can then disseminate them.”

Theator refers to its innovation as the “surgical intelligence revolution.” It uses scientific data to advance the capabilities of the AI, thus building a foundation for a future of robotic-assisted operations. The AI-powered platform is based on video analytics and smart annotation.

Using computer vision, the software scans video footage of real-time procedures and their key moments. This allows surgeons to watch video recordings of procedures they have to do — broken down into their various steps — and fast forward or rewind to steps they wish to learn. Users can also get digital summaries of their own surgical performance, with analytics, graphics and rankings, allowing them to pinpoint additional training and skills that might be needed. 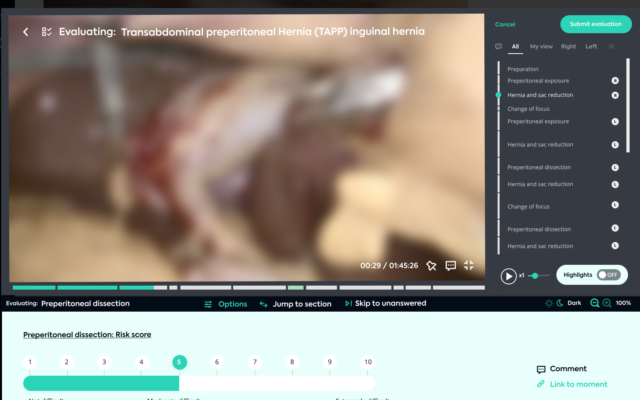 The Theator software in action (Courtesy)

“Surgeons around the world today don’t have tools that allow them to experience decision-making in surgery at scale,” he said. “Situational awareness and decision-making — these are at the core of what makes a surgery a successful procedure. This is what takes surgeons a very long time to master.”

To strengthen development, Theator became a member of Nvidia Inception, an incubator for startups in the AI and data science sectors. The idea is to take advantage of the same AI decision-making technology found in self-driving cars — algorithms rooted in analytics, efficiency, self-correction and improvement. Nvidia Corp. is a US-based gaming and computer graphics giant that acquired Israel’s Mellanox Technologies, Ltd. for a total of $7 billion in 2019.

To Wolf, the decision to work with Nvidia was a “no brainer.” He said the US firm is helping to craft Theator’s analytics and its ability to analyze video both at scale and in a timely manner, leveraging computer vision to the startup’s specifications.

Though the end goal is to make surgeons more efficient and productive, that doesn’t necessarily mean surgery will become completely autonomous.
AI systems will have to be constantly assessed and have its risks mitigated; there’s no alternative for human touch when it comes to unpredictability, especially in the operating room, so surgical procedures will always be supervised by a human, Wolf believes..

Right now, Wolf said, Theator is crafting an intelligence foundation to build on in the future. Eventually, the plan is to provide access to a wider array of opportunities at medical facilities around the world, even in places that typically lack access to tools that one might expect to see at a top hospital in the US.

With the new funding, Theator wants to beef up R&D, widen its commercial presence in the United States and cement a presence in American hospitals, secure additional partners, and expand the data used to power the AI.