As Israel’s daily case rate continued to drop a week after a second national lockdown was eased, ministers in the so-called coronavirus cabinet on Monday night approved the reopening of schools for children in first to fourth grade early next week, as well the lifting of a series of other restrictions aimed at containing the pandemic.

Under the plan given the final okay by ministers, children in third and fourth grade will be divided into pods and resume studies five days a week, while those in first and second grade will be split into two groups that will alternate days and go to school only three times a week. Children in fifth grade and above will continue remote learning.

Schools have been closed since September 18, when the nationwide lockdown came into force to drive down infection rates, though preschools and daycares were permitted to reopen last week. The reopening of the school system on September 1 has been partially blamed for a huge spike in virus cases several weeks later that led to the lockdown.

In addition to the decision on schools, ministers on Monday also approved the reopening of hairdressing and beauty salons, and other businesses that receive customers, but only one at a time, also starting this coming Sunday.

Israeli border police officers patrol on Jaffa Street in downtown Jerusalem on as Israel steps out of coronavirus lockdown and rolls back restrictions on October 21, 2020. (Nati Shohat/Flash90)

A separate meeting will be held Thursday to decide on reopening other stores and guesthouses.

Monday’s six-hour-long meeting saw ministers spar over a number of the new measures.

“I won’t support opening commerce. We’re playing with fire here,” Health Minister Yuli Edelstein was quoted as saying by Channel 12, during the discussion on allowing customer-facing businesses to return to work.

In a move that caused special tensions between ministers, it was decided that after-school care programs would resume for grades 1-2, but not in accordance with an outline that will see kids divided into separate pods, an apparent contradiction to the school plan.

During a particularly heated discussion, Finance Minister Israel Katz expressed opposition to having children study at school for only part of the week and said classes should resume in full.

“I’ve reached the conclusion that we have no choice but to let grades 1-2 study,” he said, according to leaks from the meeting. “I don’t know anywhere in the world where they did capsules [in schools].” 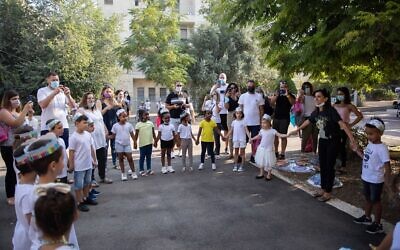 Education Minister Yoav Gallant reportedly reacted angrily to criticism of the plan by lawmakers from the coalition’s Blue and White party, some of whom also called for students in grades 1-4 to return to school full time.

“Are we one government or not? I suggest you tell your representatives in the Knesset to calm down and maintain a spirit of cooperation and not schism,” he said.

Nonetheless, and despite the ministerial decision on grades 1-2 only learning three days a week each, Gallant told Channel 12 shortly after the meeting that children in those grades would be at school for more days of the week, at least in certain parts of the country.

“Together with the mayors and school principals, we will open classes for first and second grades for more than three days —  in many parts of the country, it will be four days,” he said, without explaining the discrepancy, and adding that “there are places that will also have five days.”

Though schools nationwide have been officially shut due to virus restrictions, hundreds of ultra-Orthodox elementary and high school yeshivas — including in high-infection areas — opened last Sunday in defiance of the law at the order of a senior rabbi, with many ultra-Orthodox officials justifying the move and police only sporadically enforcing the restrictions.

Following the initial coronavirus lockdown in the spring, health officials abandoned their staged plan amid pressure from ministers and opened nearly all schools and businesses at once in early May. That move has been blamed for playing a part in runaway infection rates over the summer that led to the second national lockdown. 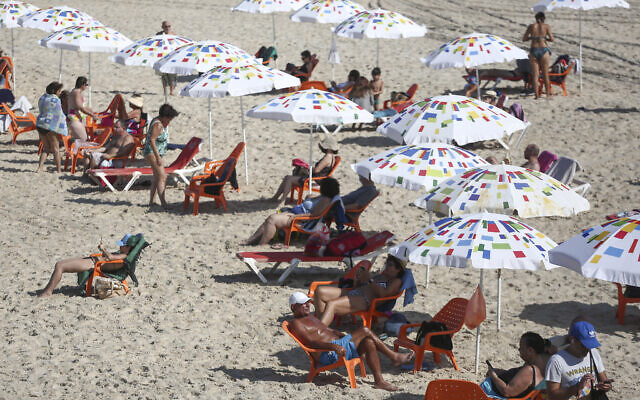 Israelis on the beach in Tel Aviv on October 18, 2020, as lockdown restrictions were eased. (Miriam Alster/ FLASH90)

Earlier Monday, the Health Ministry announced that the rate of positive coronavirus tests in the country had hit a new low since the beginning of the second wave in June, with just 1.9 percent of all 26,282 test results that had come back so far Monday returning positive.

Additionally, the number of patients in serious condition fell below 500 for the first time in about six weeks, according to the data.

The total number of cases since the pandemic began was recorded at 310,600, including 13,375 active cases. Of them, 486 patients were in serious condition, including 196 on ventilators. Another 142 were in moderate condition and the rest had mild or no symptoms.

Israel’s total death toll from the virus increased Monday to 2,440.