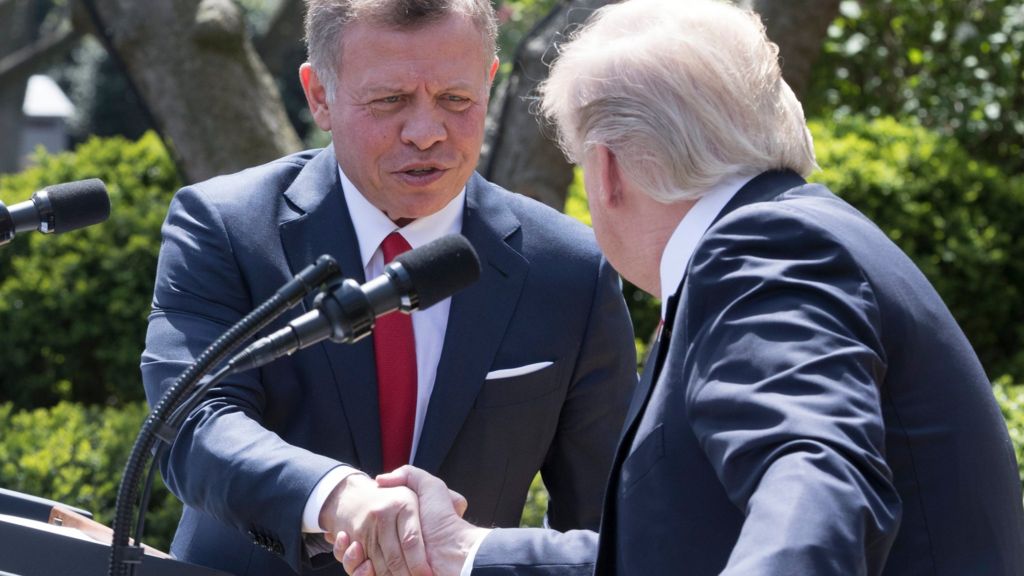 From Cairo to Qatar, the US presidential candidate once derided as impulsive, an Islamophobe and a misogynist appears to have turned into the Arab world’s most popular US president since George H W Bush led the liberation of Kuwait from Iraqi occupation in 1991.

Today, Donald Trump is riding high in much of the Arab world’s eyes. So what is behind this and will it last?

Ask anyone in the Arab world what they think of former President Barack Obama and most will tell you that his eight years in office were a massive disappointment, at least as far as the Middle East is concerned.

This was supposed to set America on a path to new and better relations with the Arab world. Expectations were raised to unrealistically high levels and disappointment swiftly ensued.

The Arab world watched the Syrian war spiral out of control, a presidential “red line” get crossed with impunity when chemical weapons were fired at civilians outside Damascus, and no tangible progress made on a Palestinian-Israeli peace deal.

Worst of all, in Gulf Arab eyes, Mr Obama was seen as being soft on Iran, fuelling a suspicion that Washington was preparing to downgrade its Gulf Arab ties.

“People on the [Arab] street got sick and tired of Obama,” says Mustafa Alani, director of the security and defence department at the Gulf Research Centre.

“During his time, we witnessed the rise of [so-called Islamic State], the entry of Russia into the region and the aggressive expansionism of Iran across the Middle East.”

Enter Mr Trump. A man who, as one of his first acts in office, tried to ban visitors from several Muslim-majority countries, none of which have ever attacked the United States.

No matter. This seems to have been largely overlooked in the gushing praise being heaped on the president for both talking tough and acting tough when it comes to Syria.

One hashtag doing the rounds on social media even reads “We love you Trump”.

What people admire is what they see as his willingness to act on his convictions, in contrast to how Mr Obama was perceived by many in the region – perhaps unfairly – as weak, indecisive and not really interested in the Middle East.

Behind the scenes and in the corridors of power in several Arab capitals, there is enormous relief that a new team is in the White House.

On his recent visit to Washington, Egyptian President Abdul Fattah al-Sisi was given a red carpet welcome, effusive praise from Mr Trump and little mention made of the mounting human rights abuses being committed by his government in the name of national security.

In Yemen, the Obama administration was so appalled by the civilian casualties caused by faulty targeting from Saudi-led air strikes that it rowed back on US military support for Riyadh’s coalition battling the rebel Houthi movement.

The Trump administration has reversed this.

In Saudi Arabia and Bahrain, two countries about whose human rights record the Obama administration had concerns, the White House has strengthened ties.

Earlier this year, President Trump’s newly appointed CIA Director, Mike Pompeo, was given a warm welcome in both countries’ capitals.

And on Iran, where Egyptian, Jordanian and Gulf Arab rulers all feared that the Obama administration was turning a blind eye to what they saw as Iranian expansionism for the sake of the 2015 nuclear deal with world powers, the Trump administration has reassured them with its hostile rhetoric towards Tehran.

But approval for President Trump is far from universal.

Writing in Abu Dhabi-based newspaper The National in February, the president of the Arab American Institute, James Zogby, complained of what he called “ham-fisted anti-Muslim rhetoric and policies that have caused [IS], al-Qaeda and the Iranian leader to thank him”.

What the Arab world wanted, he wrote, was a relationship with a US partner who would work with them to ensure regional stability.

Mr Alani told the BBC that while President Trump was certainly riding high on the back of the recent US missile strike on a Syrian air force base, there was still huge uncertainty in the region about his future intentions and what he expected from Arab leaders in return for US support.

“What will he demand from us in return? Will it be money? Will it be physical participation in military or other operations?” he asked.

“We can agree [with Washington] on joint aims for the region, but we may still have differences on how to get there.”