SCHULD, Germany (AFP) — Devastating floods have torn through entire villages and killed at least 128 people in Europe, most of them in western Germany where stunned emergency services were still combing the wreckage on Friday.

Unsuspecting residents were caught completely off guard by the torrent dubbed the “flood of death” by German newspaper Bild.

Streets and houses were submerged by water in some areas, while cars were left overturned on soaked streets after flood waters passed. Some districts were completely cut off.

“Everything was under water within 15 minutes,” Agron Berischa, a 21-year-old decorator from Bad Neuenahr in Rhineland-Palatinate state, told AFP.

“Our flat, our office, our neighbors’ houses, everywhere was under water.”

In nearby Schuld, Hans-Dieter Vrancken, 65, said “caravans, cars were washed away, trees were uprooted, houses were knocked down.”

“We have lived here in Schuld for over 20 years and we have never experienced anything like it. It’s like a warzone,” he said.

Roger Lewentz, interior minister for Rheinland-Palatinate, told Bild the death toll was likely to rise as emergency services continued to search the affected areas over the coming days.

“When emptying cellars or pumping out cellars, we keep coming across people who have lost their lives in these floods,” he said.

With five more dead found in the state by Friday evening, the nationwide death toll mounted to 108. 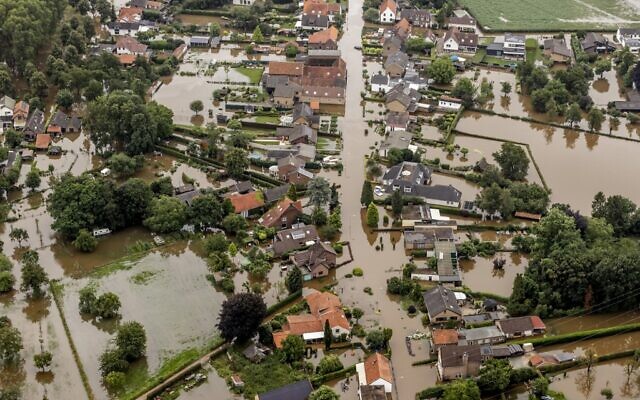 This aerial view taken in Brommelen on July 16, 2021 shows the flooded area around the Meuse after a levee of the Juliana Canal broke (Remko de Waal / ANP / AFP)

Adding to the devastation, several more people were feared dead in a landslide in the town of Erftstadt in North Rhine-Westphalia (NRW) triggered by the floods.

In neighboring Belgium, the government confirmed the death toll had jumped to 20 — earlier reports had said 23 dead — with more than 21,000 people left without electricity in one region.

Calling the floods “possibly the most catastrophic our country has ever seen,” Prime Minister Alexander De Croo declared Tuesday a day of national mourning.

Luxembourg and the Netherlands were also hammered by heavy rains, inundating many areas and forcing thousands to be evacuated in the city of Maastricht.

In Germany’s hard-hit Ahrweiler district in Rhineland-Palatinate, several houses collapsed completely, drawing comparisons to the aftermath of a tsunami.

At least 24 people were confirmed dead in Euskirchen, one of the worst-affected towns.

“I fear that we will only see the full extent of the disaster in the coming days,” Chancellor Angela Merkel said late Thursday from Washington, where she met with US President Joe Biden.

“My empathy and my heart go out to all of those who in this catastrophe lost their loved ones, or who are still worrying about the fate of people still missing.” 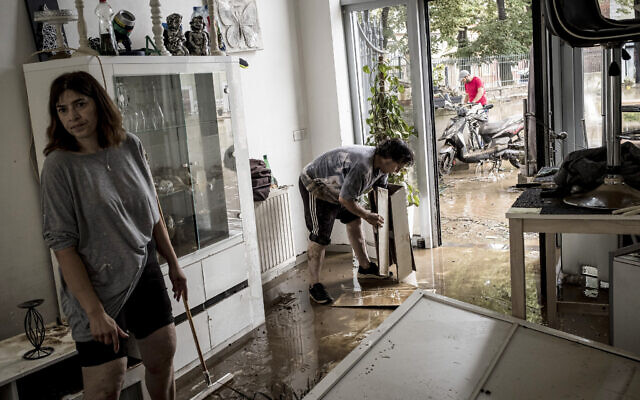 Homeowners push mud and water out of their house after flooding in Angleur, Province of Liege, Belgium, July 16, 2021 (AP Photo/Valentin Bianchi)

In Ahrweiler, around 1,300 people were unaccounted for, although local authorities told Bild the high number was likely due to damaged phone networks.

Lewentz told local media that up to 60 people were believed to be missing “and when you haven’t heard from people for such a long time… you have to fear the worst.”

Gerd Landsberg, head of the German Association of Towns and Municipalities, said the cost of the damage was likely to run into “billions of euros.”

In Belgium, the army has been sent to four of the country’s 10 provinces to help with rescue and evacuations. 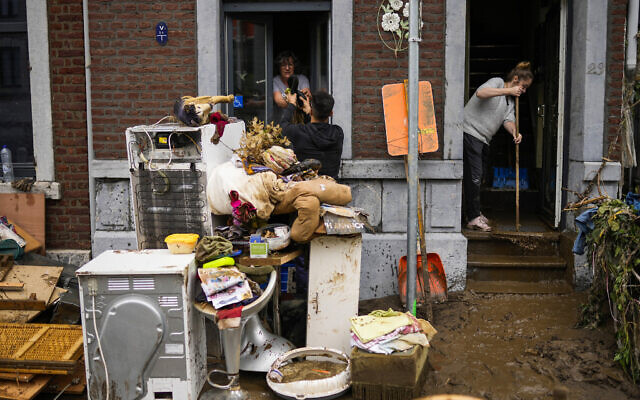 In Switzerland, lakes and rivers were also swelling after heavy overnight rainfall. In Lucerne in particular, Lake Lucerne had begun to flood the city center.

Some parts of western Europe received up to two months’ worth of rainfall in two days on soil that was already near saturation, according to the World Meteorological Organization.

But there was some improvement Friday as the water level began to fall back.

The severe storms have put climate change back at the center of Germany’s election campaign ahead of a September 26 poll marking the end of Merkel’s 16 years in power.

Speaking in Berlin, President Frank-Walter Steinmeier said Germany would “only be able to curb extreme weather situations if we engage in a determined fight against climate change.” 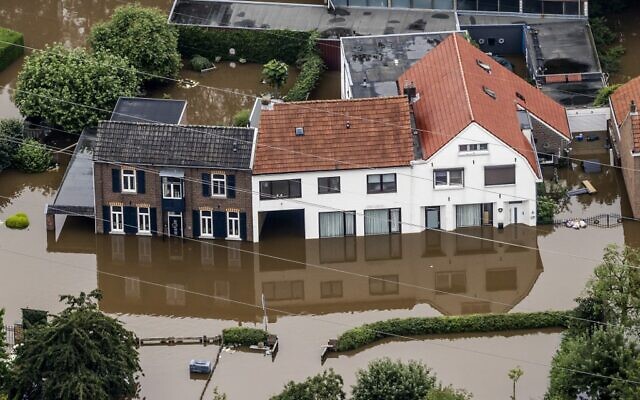 This aerial view taken in Valkenburg on July 16, 2021 shows the flooded area around the Meuse (Remko de Waal / ANP / AFP)

The country “must prepare much better” in future, Interior Minister Horst Seehofer said, adding that “this extreme weather is a consequence of climate change.”

Because a warmer atmosphere holds more water, climate change increases the risk and intensity of flooding from extreme rainfall.

In urban areas with poor drainage and buildings located in flood zones, the damage can be severe.