Mark Cavendish failed in his bid to set a new record of 35 stage wins in the Tour de France as Wout van Aert won the final stage of the 2021 Tour.

Cavendish struggled to find space and could not come past Van Aert in the final few metres of the bunch sprint on Paris’ Champs-Elysees.

But the 36-year-old had already won four stages this year to equal the Tour record of 34 set by Eddy Merckx.

Despite his failure to take sole ownership of the stage wins record, to have drawn equal with Belgian legend Merckx is an astonishing achievement by Cavendish, who had struggled for form for several seasons and feared last year his career was over.

He was only called up by Deceuninck Quick-Step as a late replacement for injured Irish sprinter Sam Bennett.

But, a full five years after his previous Tour stage win, his sprinting dominance earned him his second Tour de France green jersey, awarded to the winner of the points classification.

Cavendish was never supposed to be at this Tour. It is only nine months since he proclaimed, through tears, the likely end of his career following a difficult one-day race last year.

He has battled the Epstein-Barr virus, several heavy crashes and depression, all since his last victory at the Tour five years ago for Dimension Data. Back then he won four stages early in the race in what was seen as a swansong.

After signing a surprise one-year deal with Belgian one-day and sprinting specialists Deceuninck-Quick Step, the team were firm on Cavendish not being part of their Tour plans.

But a long-term injury to their young Dutch talent Fabio Jakobsen – who suffered serious head injuries in a horror crash at the 2020 Tour of Poland – and a last-minute knee injury for last year’s green jersey winner Bennett left the team and its characterful owner Patrick Lefevere with few options.

In many ways, Lefereve and Cavendish are kindred spirits – outspoken, passionate about their craft and known to tell journalists how they feel if they have overstepped the mark with questions.

But Cavendish is also fiercely loyal, especially to his team. He speaks of Danish rider Michael Morkov as “the anti-me” because of his unflustered, calm demeanour. And also of the class of team-mates at Quick-Step who have led him out for his sprint victories.

Cavendish said last week he has “no real sentiment either way” about the record – will he back next year to try to extend it? 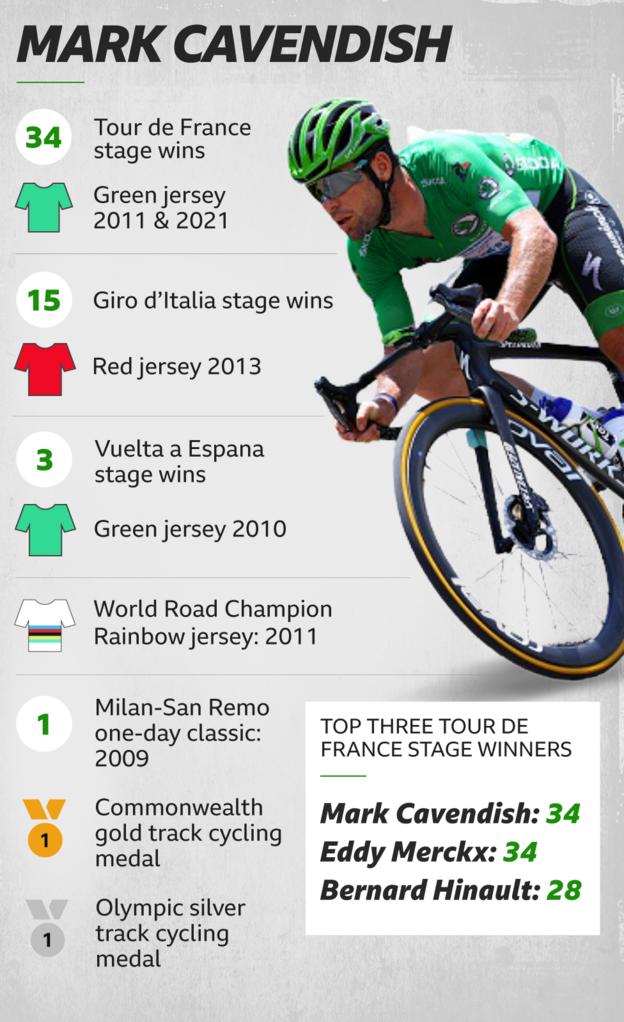 Pogacar has dominated this Tour. Unchallenged in the mountains, he blew away the rest in the first time trial on stage 5.

The 22-year-old did not once look troubled by the pace of the race, or his rivals.

This is the polar opposite from last year, when he overhauled countryman Primoz Roglic of Jumbo-Visma on the penultimate stage’s time trial to win by more than a minute after Roglic had dominated up to that point.

But the demeanour of Pogacar has changed this time around – from a young, respectful rider disbelieving of his own achievements, to one who is happy to make a point of rivals’ kidology on the climbs, by aggressively punching the air and pointedly smiling in his rivals’ direction, in the same way other legendary riders did in their pomp.

He said: “Incredible, I didn’t [ever] dream about this – it’s something beyond a dream.

“Hard to tell which [win is] more special. Last year there was no pressure, and I wasn’t ready to take the win – [I would have been] happy with second, and it ended with me winning.

“This year already I had yellow from the first week – really different. But proud of both.”

Omi, Opi & a lot of controversy

Pogacar may have been unmatched, but the fact the French police have been involved twice tells you this Tour has been an eventful one.

Day one saw a terrible crash: a fan holding a cardboard sign wishing her grandparents well caused several injuries and abandonments after she stood in the road with her back to the oncoming peloton to ensure prime TV exposure.

Organisers ASO announced they would begin legal proceedings against her, and she was subsequently arrested by police, although both later dropped any action, with the organisers hoping lessons will be learned in future.

Four-time winner Chris Froome suffered a bad crash on the same stage, struggling to walk as he was helped back to his feet – a worrying sight given his two years of recovery from a near career-ending crash in 2019.

He was already resigned to not being competitive at this year’s race, despite a multi-million pound deal with Israel Start Up Nation, but it was encouraging to see him at least finish such a punishing three-week Tour.

The race was also marred by several of Pogacar’s rivals crashing, leading to the abandonment of Jumbo-Visma’s Primoz Roglic and Geraint Thomas riding with a shoulder dislocation sustained on stage three.

Off the bike, Team Bahrain-Victorious’ hotel was raided by police late in the race following allegations over doping.

The team’s rider Matej Mohoric said after winning on stage 19: “At the end of the day I have nothing to hide.”