Christians marked Good Friday this year amid signs the coronavirus crisis may be winding down in Israel, with religious sites open to limited numbers of faithful but none of the mass pilgrimages usually seen in the Holy Week leading up to Easter.

Last year, Jerusalem was under a strict lockdown, with sacred rites observed by small groups of priests, often behind closed doors. It was a stark departure from past years, when tens of thousands of pilgrims would descend on the city’s holy sites.

This year, the Church of the Holy Sepulchre, built on the site where Christians believe Jesus was crucified, died and rose from the dead, is open to visitors and a few dozen are expected. After the morning prayer service they will retrace Jesus’ final steps along the Via Dolorosa.

“Things are open, but cautiously and gradually,” said Wadie Abunassar, an adviser to church leaders. “In regular years we urge people to come out. Last year we told people to stay at home… This year we are somehow silent.”

Latin Patriarch of Jerusalem Pierbattista Pizzaballa, center left, walks under a canopy as the circles the Holy Sepulchre during Holy Thursday mass in the Old City of Jerusalem, April 1, 2021. (AP Photo/Maya Alleruzzo)

Israel has launched one of the world’s most successful vaccination campaigns, allowing it to reopen restaurants, hotels and religious sites.

But air travel is still limited by quarantine and other restrictions, keeping away the foreign pilgrims who usually throng Jerusalem during the holy week. 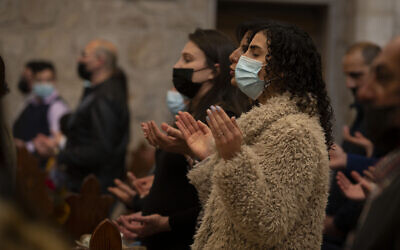 People attend a mass on a Palm Sunday at the Church of the Nativity, traditionally believed to be the birthplace of Jesus Christ, in the West Bank city of Bethlehem, Sunday, March 28 2021. (AP Photo/Majdi Mohammed)

Israeli authorities said up to 5,000 Christian Palestinians from the West Bank would be permitted to enter for Easter celebrations.

Abunassar said he was not aware of any large tour groups from the West Bank planning to enter, as in years past, likely reflecting concerns about the virus.

Abunassar said most Christians in the region celebrate Holy Week in their local parishes.

The Good Friday services in the Old City are only expected to draw a small number of people, mainly priests and foreigners who reside in Israel. 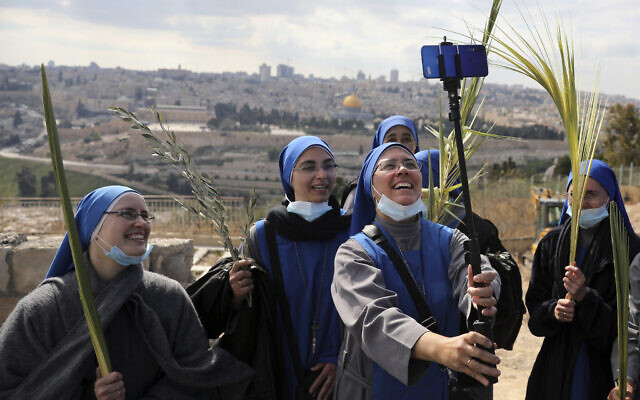 Nuns pose for a selfie as they mark Palm Sunday on the Mount of Olives in Jerusalem, March 28, 2021. (AP Photo/ Mahmoud Illean)

However, hundreds gathered in Jerusalem and Bethlehem earlier in the week to mark Palm Sunday, although the gatherings were still relatively small and abided by social distancing measures.

The Church of the Holy Sepulchre in Jerusalem was open to the public and welcomed Roman Catholics to honor the day.

Later, worshipers marched in procession from the Mount of Olives to the Old City, following Jesus’ traditional route from 2,000 years ago.

Additionally, Christians gathered for Mass in the Church of the Nativity, in the West Bank city of Bethlehem, traditionally believed to be the birthplace of Jesus.