On March 26, 1990, in the midst of the political crisis known as “the dirty trick,” the preeminent Israeli Haredi sage of the time, Rabbi Elazar Shach, delivered a speech that would help shape the course of Israeli politics to this day.

Those were fraught days. Shimon Peres was trying to cobble together a narrow government without the Likud bloc led by Yitzhak Shamir. Everything depended on the Haredi party Shas. If it went with Peres, Labor would have its government. If it stuck with Likud, Shamir would continue to lead the country.

Shas had already agreed unofficially to side with Peres.

Then, at a gathering in Tel Aviv, Rabbi Shach delivered what would become known as the “Rabbits and Pigs Address.” The left, he indicated in terms few could misunderstand, was not an appropriate object of Haredi political support.

He went on: “The Alignment [the name of the center-left mainstay that would become Labor] — the Alignment is something holy? They cut themselves off from our entire past and sought a new faith. If there’s no Sabbath and no Yom Kippur, in what sense are you Jewish?”

The speech forced Shas’s spiritual leader, Rabbi Ovadia Yosef, co-founder together with Shach of the Shas party, to reverse course and commit to Shamir.

That speech has been pinpointed by scholars and pundits in the years since as a clarifying moment for Israeli Haredi politics, which rarely again would side openly with the Israeli left against the right. It was a pivot that helped ensure the many right-wing victories at the ballot box in the years since.

Thirty-one years later, on Thursday evening, another pivotal political address was delivered, like Shach’s, live on national television. This time the speaker was Mansour Abbas, head of the Islamist Ra’am party, whose social conservatism and religious politics position him alongside the Haredi Jewish parties on a great many issues. 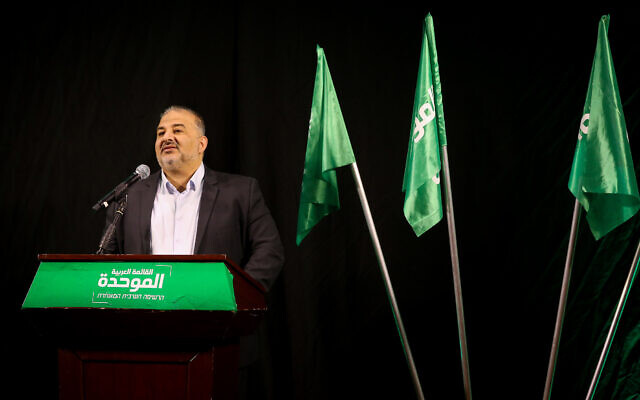 Israelis tuned in to hear Shach because his view could decide the fate of the government at the time. They tuned in to hear Abbas for the same reason. Benjamin Netanyahu lacks a majority; so do Yair Lapid and Naftali Bennett. Abbas’s tiny, four-seat faction holds the votes each might need to win the day.

“What unites us all is greater than what divides us,” Abbas said in the speech from Nazareth, and he went on to urge a new era of cooperation between Arab and Jewish political movements. Israel’s Arab community was willing to play the Israeli political game in order to end decades of neglect and help bring funding and government attention to its needs.

The right listened intently to Abbas’s speech — so intently some found the attention paid to an Islamist leader troubling. 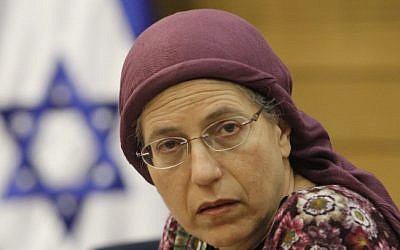 “Waiting for the address to the nation,” MK Orit Strock of the far-right Religious Zionism party tweeted on Thursday evening, shortly before Abbas’s speech. “The very fact that the country is holding its breath to hear what Mansour Abbas will say is intolerable, and unforgivable.”

It was an expression of anger not at Abbas, but at Netanyahu. It was Netanyahu who could not be forgiven for contemplating the formation of a government that depended on Abbas.

A right divided against itself

One signal that Netanyahu was planning to rely on Ra’am and Abbas: His most vocal supporters in the Israeli political debate — Shimon Riklin, Yinon Magal, Shlomo Filber and others — have gone ferociously to bat for him, justifying and validating the move.

Likud MK Yoav Kisch said he was “happy” to hear Abbas’s speech. It validated his longstanding view, he said, that the Joint List — which Abbas’s party broke with before the March elections — didn’t represent those Arab Israelis “who want to live in peace and equal rights in the State of Israel, a Jewish and democratic state. Today we learned that that voice has a representative in the Knesset.” 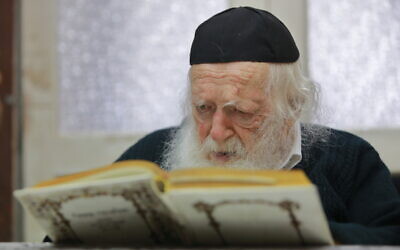 Rabbi Chaim Kanievsky at his home in Bnei Brak on December 26, 2019. (Yaakov Nahumi/Flash90)

Netanyahu’s Haredi allies, too, seemed to support the move. The Ashkenazi Haredi sage Rabbi Chaim Kanievsky, spiritual leader to the Ashkenazi Lithuanian Haredi community that makes up half the United Torah Judaism slate, released a statement very much in the spirit of Rabbi Shach’s 1990 address but tailored to the needs of the moment.

According to the statement from his close circle of advisers, the rabbi was asked if a government should rely on non-Zionist Arab-majority parties. “The rabbi said that cooperation with those who respect religion and Jewish tradition” – i.e., Ra’am – “was preferable to [cooperation with] those who persecute religion” – i.e., the secular center-left, it said.

Everything seemed to be coming together for Netanyahu — until, abruptly, it all began to fall apart.

By Friday, the hard right, sensing that Likud’s flirtation with Ra’am was no longer theoretical — no longer, as some had argued, a Netanyahu ploy to send the left into Ra’am’s arms and give Netanyahu his next campaign slogan — made its voice heard. Loudly. 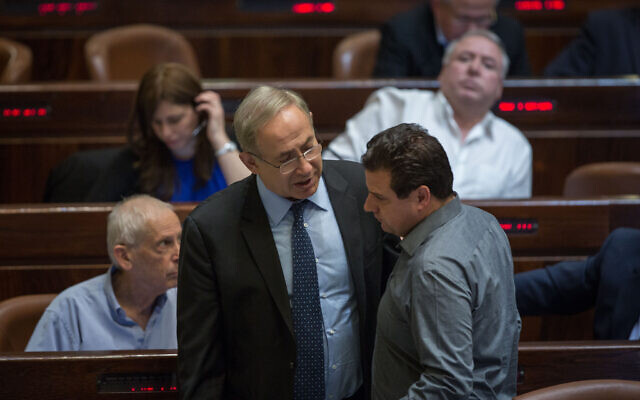 The danger posed by a coalition dependent on Ra’am, explained Religious Zionism chair Betzalel Smotrich on Friday, wasn’t the coalition itself, but all the coalitions that may come after: the potential that in order to grant Netanyahu one more term, the right was creating a repeat of Shach’s uniting of Haredi and right-wing politics.

“Establishing a government that will need to lean on Ra’am and Mansour Abbas will be a disaster we will lament for generations. We won’t allow it,” Smotrich declared.

He offered two rationales. His first was the expected and well-trodden argument of the far-right that is suspicious of Arab Israeli politics generally. The moderation expressed in Abbas’s Thursday address, Smotrich explained, was a thinly veiled ploy aimed at hiding his Islamist roots. Abbas supports Hamas, supports the Palestinian national movement, and will never recognize the legitimacy of a Jewish nation-state, he claimed. Abbas was trying, Smotrich warned, “to turn Israel into a binational state.” 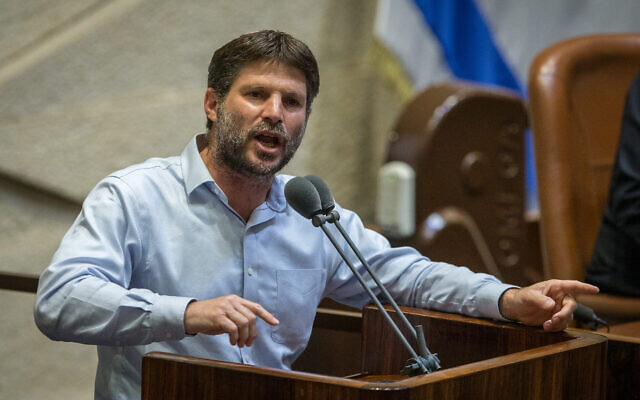 But it was Smotrich’s second point that spread like wildfire through Israel’s right-wing discourse and all but shut the door on Likud-Ra’am cooperation.

Such a pact, he said, “will lead to the loss of power for the right for decades to come, and to the end of the Jewish state. No less.”

Why? Because the right’s legitimation of political cooperation with non-Zionist parties would open the door to a left-Arab alliance that will hold the majority for the foreseeable future.

He went on: “The right is in the majority among the Jewish public in Israel, but not in the broader Israeli society. The right’s rule is founded on a basic consensus since the founding of the state that the Arab parties, as long as they reject Israel as a Jewish state and support the terrorism of its enemies, are not a legitimate partner for establishing a government and taking part in national decision-making…

“In the future, the Arabs, made legitimate partners by the right, will almost certainly side with the left. The reason is simple: The right offers them only civil [rights], whereas the left offers them civil and national [rights]. The Arabs’ joining up with the Jewish left will bring decades of left-wing rule, causing irreparable damage to the Jewish state.” 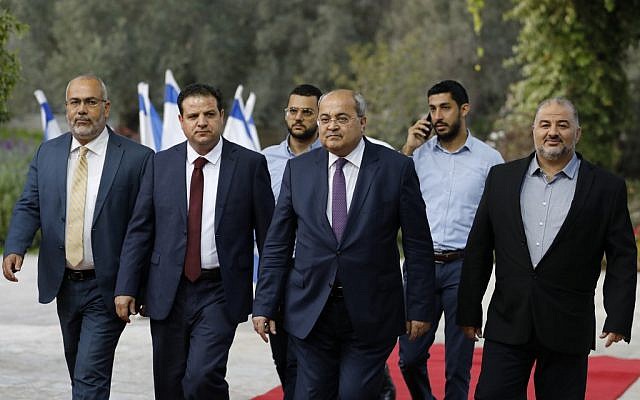 Left to right: Members of the Joint List party MKs Osama Saadi, Ayman Odeh, Ahmad Tibi and Mansour Abbas arrive for a consultation with President Reuven Rivlin on who he should task with trying to form a new government, in Jerusalem on September 22, 2019. (Menahem Kahana/AFP)

‘A spectacular act of suicide’

Netanyahu lost the support of part of the right over the past year, polls show. Some right-wing voters – there’s a debate about how many – have begun to believe that after several indecisive elections, he’s become a political handicap for the right, and that at least one of the last four national votes would have been won outright by another right-wing candidate.

That right-wing criticism, which spawned the formation of Gideon Sa’ar’s New Hope and the support for Naftali Bennett’s Yamina party in the most recent race, has now been joined by another more damaging one.

An official close to Smotrich told Channel 12 on Thursday that “the legitimacy granted this evening to terror supporters and those who refuse to recognize the Jewish state [i.e., Ra’am] causes insane, unforgivable harm, and it’s entirely Netanyahu’s responsibility.”

And it’s not alone. 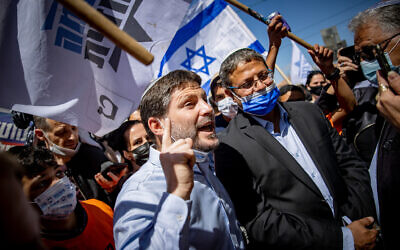 The first observers to grasp the threat of a future left-Arab alliance – or at least to utter it aloud in the Israeli public debate – were members of the Haredi press, and that’s no accident.

Moshe Glassner, a radio host on Haredi radio station Kol Barama, who also hosts a show on the Knesset channel and writes in the Haredi news and opinion site Kikar Hashabbat, laid out the argument in blunt terms (Hebrew link).

The “norm according to which it’s not legitimate to cooperate in government with Arab parties who reject Israel’s existence as the nation-state of the Jewish people has granted the right a double benefit,” Glassner wrote.

“It’s prevented a left-wing government supported by the Arabs, and lowered Arab turnout, since there’s little point in voting for parties that will forever remain in the opposition. The entry of the Arab parties into the coalition and government game will jumpstart turnout in the community to 20 seats and more,” he warned, a sharp increase even from the highest-ever showing for Arab parties of 15 seats.

The right’s legitimizing of Ra’am, he said, “is a spectacular act of suicide that will remove the right from power for decades.” 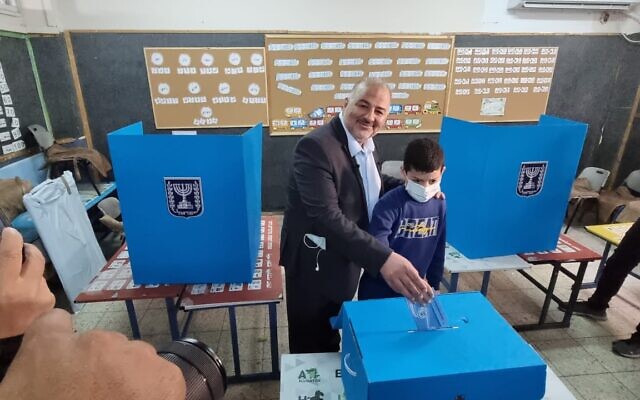 Glassner’s tweet sharing his column was “liked” on Thursday by none other than Smotrich.

The criticism has taken root. The fear over the potential long-term damage being done to the right by Netanyahu’s all but explicit flirtation with Ra’am has spread.

Even some fervent Netanyahu supporters like media personality Boaz Golan have begun to pan the idea. Golan wrote on Friday that Religious Zionism “is the only party in Israel saying what most of the nation wants to hear. All the others” – Likud included – “are frightened fish.”

The anger over Netanyahu’s Abbas gambit is especially intense among some in Likud, including leaders of the right-wing activist group in the party that calls itself the “national camp,” who have taken to explaining to the party faithful that a spell in the opposition is preferable to a Netanyahu-Ra’am coalition. Let Bennett and Lapid form their unstable, short-lived government with the left and/or the Arab parties, they say. That will only position Likud for an easier win in the next election.

Are the right-wing critics correct? Will a Netanyahu-Ra’am alliance usher in an era of left-Arab cooperation that could displace the right for a generation, as the right-Haredi alliance once did to the left? 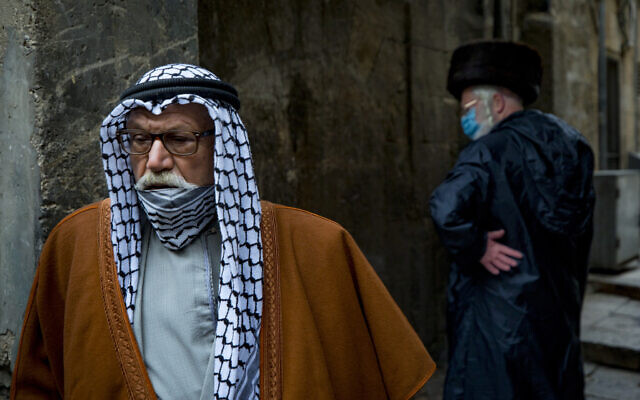 A Muslim man stands next to a Haredi man as they are blocked on a side road in Jerusalem’s Old City by the Good Friday procession along the Via Dolorosa on April 2, 2021. (Olivier Fitoussi/Flash90)

According to some, it’s already happening.

“Smotrich writes that we mustn’t establish a government with Ra’am because it would mark a dangerous precedent for left-wing parties to form a coalition that relies on the Arab parties,” noted Avishai Grinzaig, a conservative pundit and legal affairs reporter for the Globes business journal. “I’m sorry to disappoint, but Netanyahu and Abbas have already crossed the Rubicon. It doesn’t matter if in the end they actually establish such a government, or if Smotrich, on the deep right end [of that coalition], prevents it. The left has already won legitimacy for the move.”

On Thursday morning, Lapid met with Joint List leaders Ayman Odeh and Ahmad Tibi “to discuss pursuing all possibilities for ending Netanyahu’s rule and his policies and bringing change,” according to a statement from Yesh Atid. Odeh and Tibi suggested they might back Lapid for prime minister.

As one left-leaning activist put it ironically after Lapid’s meetings with Abbas, Odeh and Tibi last week: “Kudos to Yair Lapid for adopting the Riklin-Magal framework” – i.e., pro-Netanyahu pundits Riklin and Magal — “and meeting with Mansour Abbas and the Joint List to establish a government for change.”