The Tel Aviv Magistrate’s Court on Sunday approved upgrading to rape the charges against a man who had sex with a 13-year-old girl in a state-operated quarantine hotel in February. He had previously been indicted only on the charge of a forbidden consensual relationship, as well as other lesser offenses.

The unusual change to the indictment followed an outcry against the initial charges filed in April against Yarin Sherf, after which the mother of the alleged victim said she felt as though her daughter had been raped again.

Sherf, 21, was at first indicted at Tel Aviv Magistrate’s Court on charges of prohibited consensual relations, sexual harassment, making threats, assault, and giving an intoxicating drink to a minor.

Although under Israeli law, sex with a minor who is below the age of 14 is considered rape, even with consent, prosecutors shied away from filing the charge because the alleged victim had told Sherf that she was 14 and had apparently nominally agreed to the encounter.

Acting State Prosecutor Amit Isman subsequently announced he would review the matter, and prosecutors reexamined the investigative material and came to the conclusion a rape conviction was possible.

After the earlier charges were filed, the girl’s mother insisted, “His [crime] is rape, any other interpretation is false.” She added, “This decision gives a green light to and aids the next rape.”

The head of Israel’s largest women’s rights group called the first indictment a “serious systemic failure by the state.”

According to the indictment, Sherf arrived at the hotel, which provided virus quarantine for youths who were not able to self-isolate at home, on February 23, when he met the girl.

Over the following hours, he established contact via the Instagram app, and after he invited her to his room, she instead suggested he come to hers. However, before he arrived, the girl discovered his age via another social media app he was using, TikTok, and then told him he was “too old.”

When she asked him if he was really 21 years old, Sherf responded that he was 20 and asked the girl her own age. She told him she was 14, prosecutors said. 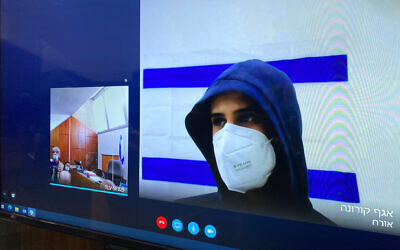 Yarin Sherf is seen on a screen via a video link during a court hearing at the District Court in Tel Aviv, March 1, 2021. (Avshalom Sassoni/Flash90)

Sherf continued to message the girl, who told him to “let it go” and declined his suggestions that he visit her room.

In one message, Sherf wrote that if she didn’t agree, he would carry out an “Eilat 2.0,” referring to the gang rape last year of a girl, 16, at a hotel in the resort city.

The following day, a staff member at the hotel, after seeing the two speaking together in a public area, warned Sherf to stay away from the girl. Sherf indicated that he would.

Nonetheless, the two continued to message each other and the girl eventually told Sherf to come to her room, where they had sex. During the encounter, Sherf slapped the girl when she refused to perform oral sex and then apologized when she warned him against the behavior.

Hours later, Sherf suggested they again meet in her room after the girl sent him a photo of herself via Instagram. Although she initially refused, telling him, “I want to be alone,” she opened the door to him when he turned up and they again had sex.

A counselor who later knocked at the door and entered the girl’s room found Sherf hiding in the bathroom, after which the incident was reported to the police.