The judges in Prime Minister Netanyahu’s corruption trial on Wednesday accepted the defense’s request to carry out a search of the phone belonging to former Walla news CEO and key witness Ilan Yeshua in what could elongate proceedings significantly.

Defense attorneys had argued that they were not given the texts from all relevant conversations on Yeshua’s phone during an earlier search.

“There are grounds for the defense’s claim that the investigative materials it received were partial,” the Jerusalem District Court judges wrote in their decision. “There is no dispute that this state of affairs must be fixed as soon as possible.”

Yeshua is the first witness to give testimony in Netanyahu’s trial. He is a top witness in Case 4000, in which Netanyahu is alleged to have abused his powers when he served as both premier and communications minister from 2014 to 2017, in order to illicitly and lucratively affect the business interests of Bezeq telecom’s controlling shareholder, Shaul Elovitch.

Israeli businessman, Shaul Elovitch and his wife Iris (not seen) arrive at the Jerusalem District Court for a hearing in the case against Prime Minister Benjamin Netanyahu who is on trial on criminal allegations of bribery, fraud and breach of trust. May 4, 2021. (Yonatan Sindel/Flash90)

In exchange, Elovitch allegedly provided Netanyahu and his family with positive coverage on the Bezeq-owned Walla, including allowing the prime minister’s associates and family members to dictate policy on a regular basis.

As part of their Wednesday ruling, the judges authorized another search of Yeshua’s phone for any conservations with politicians, businessmen, and others concerning his involvement in news coverage at Walla. The searches are to be conducted based on relevant keywords, which can also be suggested by the defense.

The volume of material involved adds up to hundreds of thousands of messages, including e-mails and also some 150,000 texts sent via the Whatsapp messaging application, Channel 13 News reported.

Prosecutors have until June 27 to hand over the material.

The expanded search could set back the trial schedule as the cross-examination of Yeshua — already in its 22nd day and expected to take several more weeks — will require far more time to complete if new evidence is introduced, Hebrew media reported. Prosecutors were considering filing an appeal against the decision as it instructs them to carry out the search, rather than police.

“We are aware that these are large quantities of material and that this directive casts a considerable burden on the State Prosecutor’s Office,” the judges wrote, lamenting that they did not see a way around heeding the defense’s request. 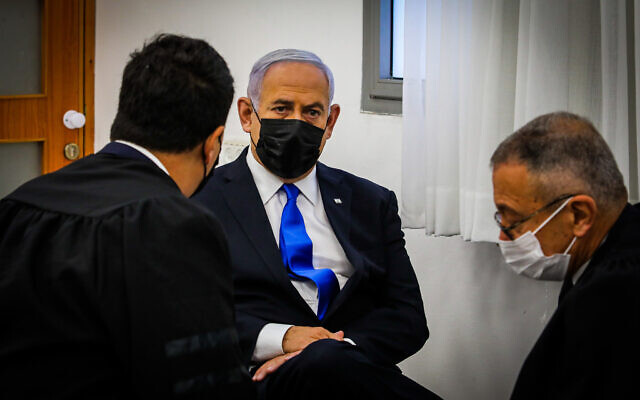 Prime Minister Benjamin Netanyahu seen as he arrives for a court hearing at the District Court in Jerusalem on April 5, 2021,(Oren Ben Hakoon/POOL)

State prosecutors had objected to providing the defense with all of Yeshua’s contacts, maintaining that the request amounted in a privacy violation. As a result, prosecutors and Yeshua himself will have the right to remove from the list any contacts they feel would harm his privacy if passed to the defense, Channel 12 News reported.

The defense has been trying to show that despite what Yeshua has been arguing, orders to give certain stories more or less visibility were commonplace not only when it came to Netanyahu but also to other politicians, businessmen and companies, and were sometimes unrelated to the Elovitches.

In his testimony, Yeshua has described how the prime minister’s son Yair and his wife, Sara, would interfere in the running of Walla.

Earlier this week, Yeshua testified during his cross-examination that Walla was ordered to take down a story about Sara Netanyahu pocketing cash redeemed from bottles that were bought with public funds and sent for recycling.

Netanyahu faces charges of bribery, fraud and breach of trust in the case, while Elovitch and his wife, Iris, have been charged with bribery. All three defendants deny wrongdoing.