The Health Ministry on Friday reported a further decline in daily coronavirus infections the day before, as Israel’s worst outbreak since the pandemic began appeared to ease after weeks of strict lockdown rules.

According to the ministry, 7,099 new cases were confirmed Thursday, after peaking at over 10,100 earlier in the week. Along with another 1,228 cases since midnight, the total number of infections recorded in Israel reached 585,746.

The drop in daily cases came as testing levels also further decreased, though the positive test rate fell to 8.9 percent.

The death toll stood at 4,245, with 27 fatalities recorded Thursday.

A woman takes a selfie as she receives a coronavirus vaccine at a Clalit vaccination center in Jerusalem on January 21, 2021. (Yonatan Sindel/Flash90)

A record 223,560 vaccine doses were also administered Thursday, as Israel charges forward with its national vaccination drive. Ministry figures showed 2,441,379 have received the first vaccine dose and 850,811 of them the second.

Israel is leading the world in vaccination on a per capita basis, with 37 out of every 100 people having received a shot as of Thursday, according to the Oxford-based Our World in Data.

To encourage vaccination, the government is planning to issue “green passports,” which will allow those who are vaccinated or who have recovered from the virus to attend large gatherings and cultural venues. The immunized will also be exempt from quarantine requirements.

However, a member of national coronavirus czar Nachman Ash’s team said Friday that the benefits will only be for people vaccinated in Israel and who are at least a week after their second dose.

“Someone who was vaccinated abroad, even if he has a [proof of] vaccination document, can only leave quarantine after an antibody test,” Orly Greenfeld told Army Radio. 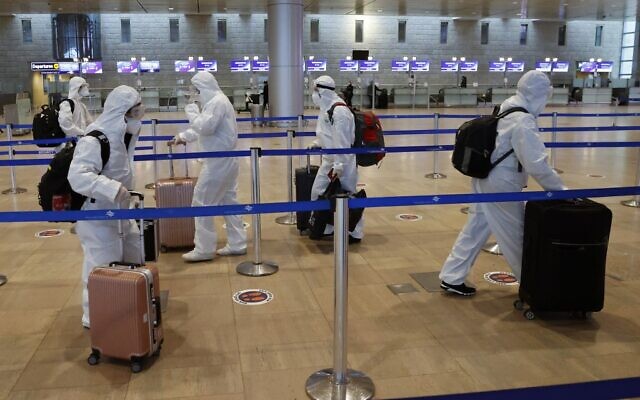 Passengers wearing full protective suits and masks to protect against the COVID-19 pandemic push their luggage trolleys at the departures area at Ben Gurion Airport on January 19, 2021. (JACK GUEZ / AFP)

She also sounded a warning over mutated strains of the virus, saying another 16 people were confirmed to be infected with the South African variant. There was no immediate confirmation from the Health Ministry, which as of Wednesday said 22 people in Israel were found to be carrying the strain.

“There is still no data on reusable masks,” she said. 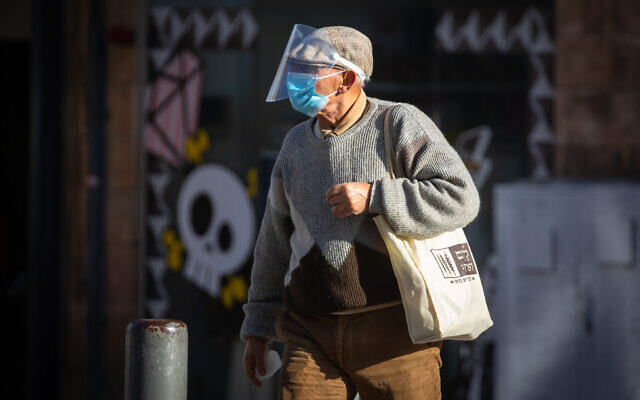 A man wearing a mask and face shield walks in downtown Jerusalem on January 21, 2021, during the 3rd national coronavirus lockdown. (Olivier Fitoussi/Flash90)

Health officials have attributed much of the recent surge in infections to COVID variants, particularly a strain that originated in the United Kingdom, which the head of the Health Ministry’s public health services division said Thursday was putting pregnant women at greater risk of developing serious symptoms.

The variants are believed to be more infectious, though not considered more deadly. Ash, the coronavirus czar, told ministers Tuesday that the variant accounts for 30-40 percent of current infections and will become the dominant strain in Israel within weeks.

On Thursday, Ash predicted health officials won’t request another extension of the third nationwide lockdown beyond its January 31 end date.

Ash noted the transmission rate dipped below 1 for the first time since late October, meaning the outbreak is slowing.

The tightened lockdown measures now in force were set to expire Thursday night, but ministers agreed to extend the restrictions for 10 more days, after Monday’s record number of daily cases.