The manager of a daycare center, convicted of abusing of nearly a dozen toddlers and infants in a case that shocked the country, was sentenced Thursday to 9.5 years in prison.

Prosecutors had sought to put Mouda away for 14 years, and parents holding a rally outside the courtroom had called for the harshest possible sentence, to serve as a deterrent to other possible offenders.

“No punishment will be enough for any of the parents, but for a deterrent, we are expecting a severe punishment, a double-digit number, no less than 10 years,” father Yossi Havera told Channel 12 news before the ruling.

Mauda — now 28 — was convicted in December on 18 counts of child abuse, in a case that sparked outrage and protests across the country, including an arson attack on Mauda’s family home, which had also housed the daycare.

The court found that she employed systematic violence against 11 children, aged three months to three years old, between May 27 and June 16, 2019.

Graphic security camera footage released by police showed Mauda tying up children, force-feeding them, smothering toddlers who refused to go to sleep with blankets, and physically abusing them.

Explaining his decision, Judge Ami Kobo said he took into account Mauda’s expression of remorse, as well as the testimonies from several mothers of the children she abused. He also factored in the backlash Mauda has already suffered, including her family’s home being set on fire, and the fact that she had a prior criminal record.

Kobo noted that similar cases in the past had carried sentences of 18 months to three years, and that while he thought the punishment for this type of crime should be longer, he did not want to set a dramatic precedent.

Carmel Mauda (R), former owner of a kindergarten who was filmed abusing toddlers, seen during her sentencing at the Lod District Court on July 8, 2021. (Avshalom Sassoni/Flash90)

“I believe the punishment should be significantly more severe. The appropriate penalty range [for such crimes] is between eight years in prison and 13 years in prison,” he said. “However, this [shift] should be done gradually for the sake of equality before the law.”

He okayed Mauda’s request to begin serving her time in September.

Parents of abused children present in the courtroom reacted with excitement and relief when the sentence was read aloud, shouting out “Justice for the children!”

The Central District Attorney’s Office lauded the ruling, calling it another step in its fight to “increase the punishment in cases of abuse and assault of the helpless by a guardian.” 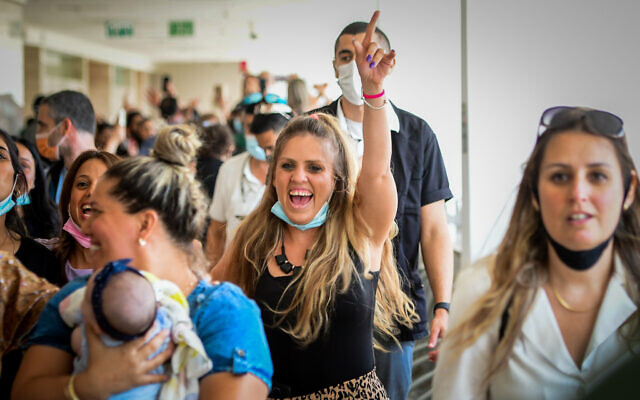 Parents of children abused by Carmel Mauda celebrate the latter’s sentencing at the Lod District Court on July 8, 2021. (Avshalom Sassoni/Flash90)

“We hope that the punishment imposed today by the court on the defendant will be a warning sign to anyone who intends to harm the physical and mental wellbeing of toddlers and the helpless,” the prosecution said.

“We are really happy about the punishment she received. She deserves it,” Meital Atari, the mother of one of the children abused by Mauda, told Ynet.

“I have been waiting for this day for two years. There is a sense of relief. I now have peace of mind. Justice is finally complete.”