A ceremony was held Saturday to thank members of Israel’s National Rescue Unit for their help in trying to find survivors in the mountain of rubble left behind where a condo building collapsed in Surfside, Miami.

The Israeli team of seven from the IDF’s Home From Command flew out to the US and began working at the site three days after the building collapsed last month.

Levine Cava presented the team with medals and thanked them for their help in the grim work.

The team was also cheered as they walked through the town, with the streets lined by local rescue teams and residents.

Members of the Israel Defense Forces National Rescue Unit are given a sendoff by search and rescue personnel July 10, 2021 in Surfside, Florida (Anna Moneymaker/Getty Images/AFP)

Some of the Israeli team left the US on Saturday night and the rest were to follow on Sunday.

Champlain Towers South, a 12-story building in Surfside, a town north of Miami Beach, came tumbling down on June 24, as dozens of residents slept inside.

No survivors have been found since the day of the collapse.

On Sunday morning the confirmed death toll was 86 and a further 43 people were still listed as missing, believed buried under the remains of the building.

Authorities have concluded that there was “no chance of life” in the remaining rubble, but the pressure has not waned for the crews to find victims so families can lay their loved ones to rest.

Officials announced last week they had decided to transition from a search and rescue mission for potential survivors to an operation to recover remains.

The mayor of the town of 6,000 residents, Charles Burkett, had hailed the “really incredible” progress of the search and rescue teams, who have been working around the clock at the site of the tragedy.

The rubble from the building was around four stories high after the collapse, but is now almost at ground level, Burkett said at the time.

Miami-Dade Fire Chief Alan Cominsky said victims had been found “all throughout the rubble pile.”

But recovery efforts have been concentrated on areas where stairwells would have collapsed, he added, as people could have been trapped in stairwells trying to escape. 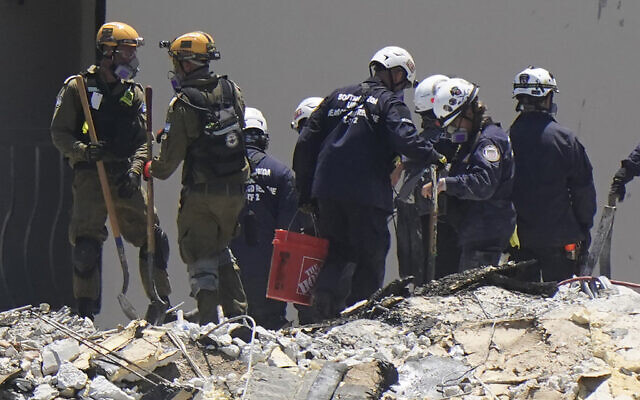 Two members of an Israeli rescue team, left, talk as they work with American crews in the rubble at the Champlain Towers South Condo, in Surfside, Florida, June 27, 2021. (Wilfredo Lee/AP)

Multiple investigations are underway to determine the cause of the collapse.

A 2018 report released by city officials revealed fears of “major structural damage” in the complex, from the concrete slab under the pool deck to columns and beams in the parking garage.

In a letter to residents in April, Jean Wodnicki, chair of the condo association, described “accelerating” damage to the 40-year-old building since then and repairs had been set to begin soon.

Local authorities ordered safety reviews of nearby buildings following the disaster, including Champlain Towers North, the sister tower of the condo block that fell down.