KABUL, Afghanistan — A boy sobbed in the back of a car in Kabul on Friday, squeezed beside the coffin of a relative killed in the devastating blasts that quickly overwhelmed the city’s hospitals.

He was among a crowd of people who gathered at the capital’s Emergency Hospital to collect the bodies of loved ones after Thursday’s sunset bombings outside Kabul airport.

Bowing his reddened face between his crossed arms and wiping away tears with his scarf, the youngster stared down at the plywood box, wrapped shut with a white sheet.

Another Afghan, Abdul Majeed, came to the clinic to look for his brother, an 11th-grade student who was at the airport with no documents or papers, desperate to escape the “troubles” of his home country.

The bombs ripped through crowds massed outside the airport, hoping to flee new Taliban rule as the deadline for evacuations drew closer.

Clothes and blood stains of Afghan people who were waiting to be evacuated are seen at the site of the August 26 twin suicide bombs, which killed scores of people including 13 US troops, at Kabul airport on August 27, 2021. (WAKIL KOHSAR / AFP)

Scores died, including 13 US servicemen, in the Islamic State-claimed attacks.

Majeed said he saw hundreds of people, dead and alive, being brought overnight to the hospital, a major trauma clinic.

“I saw every one with my own eyes. My brother was not among them,” he said. “Since yesterday, I have searched all the hospitals in Kabul but I have failed to find him.”

Majeed said his younger brother was a talented student, but “such an atmosphere has been developed in Afghanistan that everyone wants to go abroad, and that’s because of the troubles here.”

Others also came on foot, exhausted after a sleepless night, to sit in groups on the pavement outside the walls of the medical center, waiting for news from within.

One man emerged from the gates clutching his mobile phone, showing a picture to those gathered outside of a loved one receiving treatment. 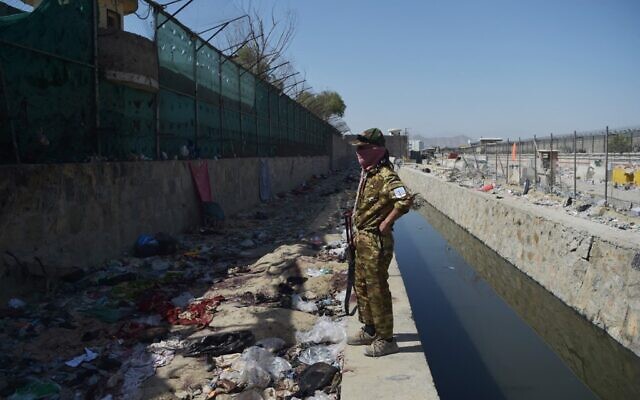 The bomb victim is lying in a bed, his eyes closed and face bandaged.

In a tweet on Friday, the hospital said the “situation is still quite critical.”

“Our three operating theatres in the hospital have been working all night long — the last surgery was at 4 a.m.,” it said. “We have people in intensive care, in sub-intensive care.”

Meanwhile, the scene of one of the deadly blasts at the airport was silent and deserted except for a couple of armed guards.

Birds sang in the Kabul sunshine, but the bloodstained clothes that lay scattered on the ground bore testament to the horror of the attacks the day before.