The high-level coronavirus cabinet on Wednesday refrained from reimposing major restrictions to curb the resurgence of COVID-19 in the country, while ordering rapid testing at geriatric centers and summer camps to detect outbreaks.

The forum of ministers tasked with forming virus policy convened to discuss reintroducing some restrictions to drive morbidity down, after a meeting the night before ended without any decisions.

Following Wednesday’s meeting, the panel said it decided to step up Israel’s vaccination drive and public advocacy campaign to encourage social distancing and mask-wearing. It said rapid tests would be introduced for those entering geriatric facilities, as well as summer camps with over 100 campers.

The ministers also said that all travelers from abroad will now have to self-isolate until receiving a negative COVID-19 test result from samples taken upon landing. Currently, only those who have not been vaccinated or recovered must await their results in isolation.

The Health Ministry will also consider shortening the general quarantine period for those required to self-isolate, a statement following the meeting said. That period currently stands at 10 days with two tests or 14 days without testing for those exposed to virus-carriers, though the vaccinated are not required to enter isolation unless they are confirmed to have the virus.

“The cabinet has also authorized the prime minister and health minister to make ongoing decisions to implement the strategy that was determined,” the statement from the Prime Minister’s Office said.

Israelis wear protective face masks as they walk through the Carmel market in Tel Aviv, on July 05, 2021. (Miriam Alster/FLASH90)

The daily caseload from a resurgence of the coronavirus continued to rise with 521 new coronavirus cases diagnosed on Tuesday, topping 500 for the second day in a row, with those two days being the only days that the figure was above 500 in recent months.

Health Ministry figures released Wednesday showed that the number of serious cases had risen to 40, up by two from the day before, which was already the highest number since May. There are 3,274 active virus cases in the country, the Health Ministry data showed, while the death toll remained steady at 6,429.

The reports came as the country’s health management organizations were reportedly failing to meet a government goal of vaccinating 50 percent of children aged 12-15 by the end of the month.

By the weekend, teens will no longer be able to make use of the existing supply of vaccines, since they expire at the end of the month and there is a three-week gap needed between the first and second shots.

Israel’s vaccination campaign is currently only open to ages 12 and up. Officials okayed the vaccine for 12- to 15-year-olds in early June, but authorities only began encouraging vaccinations for the age group at the end of last month in response to rising case numbers.

The Clalit HMO reported that it has vaccinated 63,500 children, representing 20% its members who are in the target age bracket. The Meuhedet HMO has vaccinated 20,600, which along with booked appointments accounted for 32% of its relevant members. The Leumi HMO said that 7,500 youths have been vaccinated at its clinics, 25% of the members targeted. Only Maccabi, of the country’s four HMOs, reported that it was close to vaccinating 50% of its members in the 12-15 age group but did not give further figures. 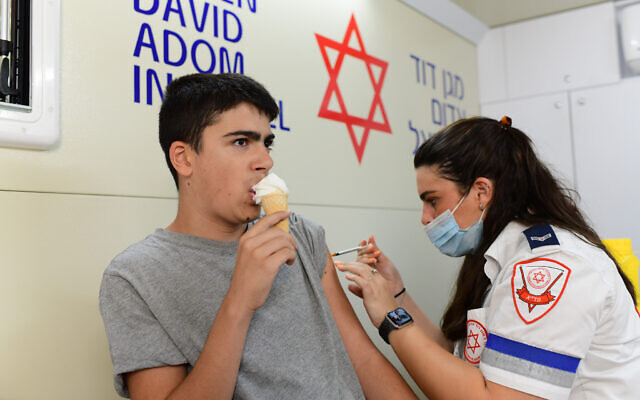 An Israeli teenager receives a Covid-19 vaccine injection, at a vaccination center of the Tel Aviv municipality and Magen David Adom, in Tel Aviv, on July 4, 2021. (Tomer Neuberg/Flash90)

Prime Minister Naftali Bennett has said that vaccinations, in particular for children, are a key tactic in halting the recent outbreak while avoiding the reintroduction of restrictions that were imposed over the past year.

The resurgence of the virus has become a major issue for Bennett’s new government, coming less than two months after the numbers of cases had dwindled, allowing Israel to lift most restrictions and reopen public life.