Despite their acrimonious split last year, Benny Gantz’s Blue and White and Yair Lapid’s Yesh Atid could reunite for a joint run in the March elections, according to a Friday report.

According to the unsourced Channel 13 report, Lapid is waiting to see the results of internal polling on whether the addition of Gantz to the slate would hurt their chances of success.

The report said that Gantz wants the two parties to run together, apparently with Lapid at the head of the list, whereas Yesh Atid’s preference is for Blue and White to be absorbed into their slate and become one party.

Additionally, the broadcaster said that both Lapid’s Yesh Atid and Ron Huldai’s The Israelis would both be more willing to unite with Blue and White if Gantz were no longer in the party.

While Gantz is lacking in political goodwill after he reversed an election pledge and joined Prime Minister Benjamin Netanyahu’s coalition, he has nearly NIS 20 million in campaign financing at his disposal. While few MKs remain in his Blue and White faction, the party will still get NIS 1.138 million for each of the 14 he entered the coalition with due to the fact that each of the mutineers split off solo, leaving the money behind.

Earlier this week Gantz expressed regret for having said that Lapid, who leads the opposition, “hates people.”

Looking into the camera to directly address Lapid, Gantz said, “I am sorry for what was said. What was said in the past belongs in the past, the future is unity.”

He maintained that what the two have in common is greater than what divides them but would not be drawn into saying whether he would agree to be Lapid’s No. 2 if they ran on a joint slate, despite having earlier in the day indicated that he would.

Gantz also deflected suggestions that he step down as party leader in the face of polls that predicted Blue and White will get just four or five seats in the coming vote, down from the 14 it had before the Knesset dissolved last month over a failure by the unity government to pass a state budget.

Since then, nine of Blue and White’s lawmakers have left the party to join rival movements, were pushed out, or exited politics. 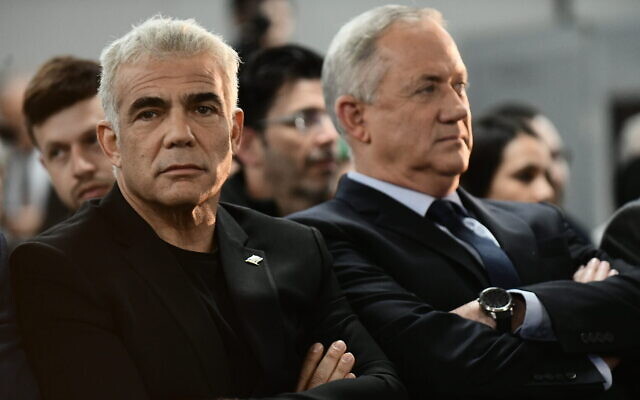 During an interview Tuesday with Kan news Gantz had indicated he was willing to let Lapid lead an alliance of parties opposing Netanyahu. “Yair has come a very long way in Israeli politics and he can stand at the head of the [center-left] bloc. He has come a long way, and if that is what we decide, then yes,” Gantz said.

Lapid has in the past said he would be open to a possible union with Gantz once more, but only if he himself leads the slate.

Gantz, who entered politics two years ago vowing to replace Netanyahu, merged his nascent Israel Resilience party with Yesh Atid to form Blue and White under his leadership, and narrowly failed in three elections to form a coalition without Netanyahu’s Likud. While he campaigned on the promise that he would not serve in a government with Netanyahu so long as the prime minister faces corruption charges, Gantz agreed to do just that in late March, and formed a unity government with Netanyahu in May.

Furious, Yesh Atid and a second minor faction (Moshe Ya’alon’s Telem) broke away from Blue and White and went into the opposition. Blue and White has watched its popularity plummet since, leading to a hemorrhaging of lawmakers who have left the party since elections were called last month.

On Monday, Gantz pleaded for an alliance of all who oppose the premier in order to boot him from office.

Responding to the Monday announcement, Yesh Atid said it would “make every effort to form alliances that will lead to a sane, liberal government that will change the country.”

The March 23 elections will be the fourth round of voting in two years. Icing on the matzah: NY kosher food maker turns over for Passover