NEW YORK — The Biden administration’s decision to delay its plan to reopen a Jerusalem consulate for the Palestinians, at Israel’s behest, has exposed a unique dynamic in the relationship between the world superpower and its Mideast ally.

Despite the apparent power imbalance, US President Joe Biden has agreed to shelve a policy goal and campaign promise for almost half a year in order to avoid destabilizing Prime Minister Naftali Bennett’s politically diverse coalition as it seeks to coalesce.

US Secretary of State Antony Blinken notified Jerusalem of Washington’s intention to reopen the de facto mission to the Palestinians in May, so waiting until after the new Israeli government passes a budget, as the US has agreed to do, would mean putting off the matter until November, at the earliest.

Biden’s willingness to bend to Bennett’s convenience on such a contentious issue in Israel could suggest the neophyte prime minister holds some leverage over the leader of the free world.

“The Biden administration has an interest in this government getting off to a smooth start and stabilizing in its early months,” said one former US official who spoke on the condition of anonymity. “It’s understandable that it would be open to requests to not do things or raise issues in the early stages that might be a source of tension for the new Israeli government.”

But the former official also cautioned against overstating the significance of the situation, suggesting it would be better characterized as a “prioritization of interests” than leverage.

“If the consulate moves in November instead of August, that’s not such a big deal, whereas helping the Israeli government get through the budget passing period carries much more weight,” the former official said.

Ilan Goldenberg, who served as chief of staff to the State Department’s special envoy for Israeli-Palestinian negotiations during the Obama administration, agreed that Bennett’s government has leverage “on big public moves that could be politically controversial.”

The US “sees the new government as an opportunity to move beyond what’s been a pretty destructive approach by Benjamin Netanyahu, both in terms of the Israeli-US relationship and the health of Israeli governing institutions, so there’s a desire not to rock the boat too much,” he said.

Washington is also unlikely to challenge the new Israeli government over how it responds to attacks from Gaza, a former Obama-era official familiar with the current administration’s thinking speculated. The former official said there’s recognition in Washington that Bennett will want to respond more forcefully to rocket fire, and even the launching of incendiary balloons, than his predecessor Netanyahu did and that the US may have to bite its tongue, despite concerns that Israel’s aggressiveness could lead to another deadly flareup in Gaza.

The Israeli impression based on recent talks with the Biden administration is that the US recognizes it cannot push Jerusalem to take major steps vis-à-vis the Palestinians that would risk collapsing the broad coalition, Israeli officials told The Times of Israel last month.

Biden officials have indeed repeatedly stressed that they are not seeking to restart high-level negotiations between Israel and the Palestinian Authority on final status issues, and instead prefer smaller, more tangible steps to ensure “equal measures of safety, of security, of prosperity, and importantly, of dignity” for both peoples. 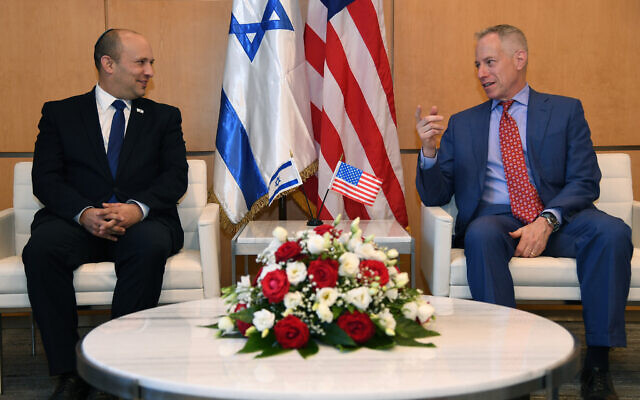 Leverage is a two-way street

In the context of such smaller gestures that Israel can take toward the Palestinians, the US retains its traditional leverage over the Jewish state, Goldenberg argued.

On those issues, “the US has the ability to say [to the Bennett government], ‘You promised things would be different. We’re going to give you some space, but you have to give us something in return,’” he said.

Moreover, Goldenberg noted that such pressure would also be coming from within the Israeli coalition, where senior members from almost every party have spoken of their interest in improving ties with the Palestinians and “shrinking the conflict.”

“That becomes leverage that the US can use to demand improvements to Palestinian lives on things like economic assistance, freedom of movement, permits and policing — all matters that can be addressed quietly,” he said.

An Israeli official told The Times of Israel that Defense Minister Benny Gantz has presented Biden administration officials with a list of initiatives his office hopes to implement in order to strengthen the PA, though many of them will require a nod from the more hawkish Bennett.

“The new Israeli government is also keen to get off on the right footing with the US administration and ensure a more bipartisan relationship than [the one that] existed under Netanyahu,” said Lucy Kurtzer-Ellenbogen, who heads the US Institute of Peace’s Israeli-Palestinian Conflict Program. 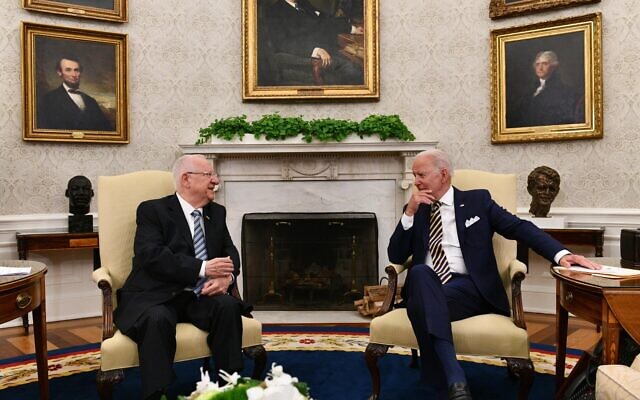 Still, it’s not as if the relationship has been devoid of disagreements since Bennett took office in June. In the past month and a half, the US has spoken out against the establishment of a new Israeli outpost in the West Bank and was particularly critical of the Israel Defense Forces’ punitive demolition of the family home of an alleged Palestinian attacker.

Moreover, the Biden administration hasn’t forgone its plan to reopen the consulate altogether. “Implicit in the ‘don’t bug us before November’ message from the Israelis is an understanding that they’ll do it afterward,” said the former Obama official familiar with the current administration’s thinking.

As one official from Bennett’s Yamina party part put it, the new government is “determined to prevent pinpointed disagreements from impacting bilateral ties more broadly.”

What’s clear is that the dynamic between the two administrations is one of much more give and take.

No one in Washington is responding to Israeli concerns with “Who’s the fucking superpower here?” as former president Bill Clinton did after hearing out then-prime minister Netanyahu, according to Aaron David Miller’s book “The Much Too Promised Land.”

But Kurtzer-Ellenbogen argued that the more cautious US approach that takes internal Israeli politics into account is “not necessarily without expiration date.”

“For now, the interests of all parties toward stability and in favor of longer term interests are seemingly holding sway and dictating strategic patience,” she said.