DR MICHAEL MOSLEY: Why I’m cutting back on hand washing (but keeping my mask on)

By Dr Michael Mosley for the Daily Mail

Did your life change much on Freedom Day this week? No, nor did mine.

Since Monday, we have been able to mingle without masks or go into a packed pub, if that’s what grabs you.

When I go to my local supermarket, I still pat my pockets to see if I have my keys, my wallet and my face mask.

The only difference is that when I get home, although I wash my hands, I do so less religiously than before and without singing ‘Happy Birthday To You’ twice. I certainly don’t bother wiping down my shopping.

That’s not just because I’ve been double-vaccinated, but also because it’s become increasingly clear that while the risk of picking the virus up from others, particularly in an enclosed space, is high, the risk of picking it up from surfaces seems to be very low.

The only difference is that when I get home, although I wash my hands, I do so less religiously than before and without singing ‘Happy Birthday To You’ twice. I certainly don’t bother wiping down my shopping

I’m certainly not complacent. The UK has some of the highest rates of Covid in the world, and now that people are packing nightclubs and bars, rates of infection and hospitalisation are bound to shoot up.

I’d love to be more optimistic but I fear that Freedom Day will lead to another big wave of Covid.

The vaccines are fantastic, but are not infallible — and because so many people have yet to be fully vaccinated, the rest of us remain at risk.

That said, lots of things have changed over the last 15 months, including our understanding of how the virus spreads.

At the start of the outbreak the World Health Organisation (WHO) advised us to avoid face masks, to wash our hands and keep surfaces clean.

Now we know that Covid-19 is almost entirely transmitted by getting up close and personal with other people. Wearing masks and keeping your distance offer good protection, while obsessively disinfecting surfaces seems to be largely a waste of time and money.

One of the reasons why the WHO got so worried about the risks posed by dirty door knobs is laboratory studies showed Covid-19 particles can persist on plastic and stainless steel surfaces for days.

It generated a fear that we could pick it up from touching handrails and then get infected by rubbing our eyes. In reality, there is very little evidence this happens.

In a recent study researchers from Israel swabbed personal items and furniture from hospital isolation units and rooms in a quarantine hotel.

Although they found Covid particles in more than half the samples swabbed in the hospital and 40 per cent of those in the quarantine hotel, try as they might, none of the 97 samples they collected were capable of infecting tissue samples.

In other words, none seemed to be alive or dangerous. 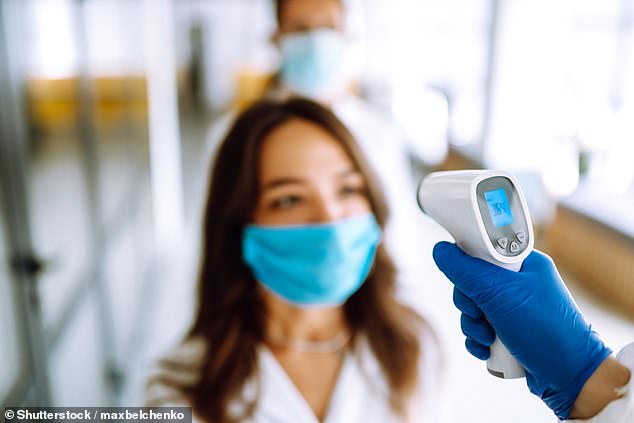 Wearing masks and keeping your distance offer good protection, while obsessively disinfecting surfaces seems to be largely a waste of time and money

Another study, published last November in the journal Nature, which looked at the effectiveness of different interventions at slowing the spread of Covid, concluded that cancelling indoor gatherings and closing borders made a big difference, while ‘environmental cleaning and disinfection’ did not.

And yet another study tried to put a number on the risk. During the height of the pandemic in the U.S., researchers from Tufts University in Massachusetts went into a town called Somerville (population 81,000) and began swabbing things such as the buttons at pedestrian crossings, door handles in businesses, and petrol pumps.

Around 9 per cent of the samples they took tested positive for Covid particles, with banks and liquor stores having the highest rates.

But based on the amount of virus they detected, they estimated the risk of getting infected after touching an infected surface is less than five in 10,000. In other words, not very likely at all. Dr Joseph Allen, director of the healthy buildings programme at Harvard University, goes further.

He wrote an article recently which began with the bold statement: ‘We don’t have a single documented case of Covid-19 transmission from surfaces. Not one.’

He pointed out that getting infected by Covid is a bit like cigarette smoke — you smell it far more indoors than outdoors, and we don’t normally try to protect ourselves from cigarette smoke by scrubbing down countertops.

‘Shared air is the problem,’ he points out, ‘not shared surfaces’. Which begs the question, why are companies still spending millions of pounds on deep cleaning?

He thinks this is an example of ‘hygiene theatre’, doing something because it looks good, not because it is effective.

It would surely be better to spend more money on improving ventilation in buildings (which is effective) and less on spraying every surface in sight.

With other nasty infectious diseases, such as norovirus, the vomiting bug, on the rise I will continue to wash my hands, but nothing like as often or enthusiastically as I did a year ago.

The new memory sharpener… a zap to the brain

Your brain is a precious thing — the most complex organism in the universe — so why might you want to zap it with electricity?

Well, because research suggests that small electric shocks can speed up your reaction times, improve your memory and might even help delay the onset of dementia.

The modern form of brain zapping is called transcranial direct stimulation (tDCS) and it involves small electric shocks that stimulate brain cells, with few, if any, side-effects. A couple of years ago, I had my brain tickled this way by researchers at the University of Oxford.

I wore a cap studded with electrodes that would deliver a series of tiny electric shocks, each less than a thousandth of an amp, and started by doing a series of reaction-time tests such as pressing a button whenever a pattern of lights appeared on a screen.

Then the cap was activated. I suddenly felt incredibly alert, as if I had just consumed a huge amount of caffeine. When I retook the tests, there was a 10 per cent improvement in my reaction times and I also became more accurate.

Since then, there have been a number of trials using a similar approach. Two years ago, in a study by Rob Reinhart, an assistant professor of psychological and brain sciences at Boston University, brain stimulation was shown to improve working memory in people in their 60s and 70s.

Dr Reinhart asked a group of people in their 20s and a group in their 60s and 70s to perform tasks including looking at an image and then, after a brief pause, looking at another. They had to guess whether the second image was the same or slightly different from the original.

As the scientists expected, the group in their 20s did much better than the older group. Then the older group received 25 minutes of tDCS. When they repeated the tests, the older group did just as well as the youngsters and the effect persisted long after the electrodes were removed.

The technology is still at an early stage, but I’m hoping they will have it perfected by the time my memory really goes.

What’s in a name? Your job

There is a theory called ‘nominative determinism’ that claims people gravitate towards areas of work that fit their names.

I recently met a dentist called Dr Painlus, which got me wondering about how often this happens.

A few years ago, a family of doctors (all called Limb), published a study in the Royal College of Surgeons Bulletin, where they looked into this.

They found a surprising number of urologists, specialists who treat diseases of the urinary tract, with surnames such as Ball and Weedon, while among general surgeons there were plenty of Gores and Butchers.

And a study based on U.S. census records in 2015 found that if you were a man and had a name such as Baker, Carpenter, Mason, or Porter, you were 15 per cent more likely to be in that job than you would expect by chance.

Mosley apparently derives from an old English name meaning ‘mouse clearer’, so perhaps I should have been a pest controller.