Egypt is seeking to restore its regional clout by mediating between Israel and Hamas to douse the weeklong conflict in Gaza that has cost more than 200 lives.

In 2014, Egypt brokered a fragile ceasefire after a devastating weeks-long war between arch-foes Israel and Hamas, the Islamist terror group that rules the densely populated Palestinian enclave.

In the latest conflict, which entered its second week Monday, Israeli airstrikes and rocket fire from Gaza have killed over 200 Palestinians and 10 people in Israel, officials on the two sides say. Hundreds more have been wounded.

“In a region where normalizing states are expanding their own relations with Israel, Egypt… has a vested interest utilizing its geographic proximity to Gaza to leverage its diplomatic power,” said Tareq Baconi, a senior analyst at the International Crisis Group.

Palestinian families whose homes were damaged by Israeli aircraft strikes in response to rocket fire are displaced to a United Nations school in Rafah, southern Gaza Strip, on May 17, 2021 (Abed Rahim Khatib/Flash90)

An Egyptian intelligence delegation reportedly on the ground in Israel and the Palestinian territories has boosted Cairo’s hand as a peace broker.

“The delegation is comprised of intelligence officials and has been there for several days to negotiate a ceasefire,” Khaled Okasha, a member of Egypt’s Supreme Council for Counter-Terrorism, told AFP.

Okasha, director of the state-affiliated Egyptian Centre for Strategic Studies, said he was optimistic about a breakthrough.

“Egypt has to be involved. There’s no way around it — literally and physically,” said Michael Hanna, a senior fellow at the New York-based Century Foundation.

Israel has enforced a land and sea blockade on Gaza since 2007, when Hamas seized control of the impoverished territory, home to about two million Palestinians. Israel says the restrictions are needed to keep Hamas from building up its military capabilities.

The Rafah border crossing between Gaza and Egypt is the enclave’s only passage to the outside world not controlled by Israel. 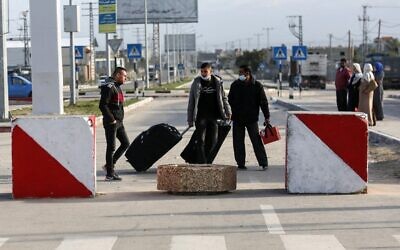 Palestinians walk with luggage at the Rafah border crossing’s departure area to travel from the Gaza Strip into Egypt, on February 9, 2021 (SAID KHATIB / AFP)

President Abdel Fattah el-Sissi instructed authorities last week to open the crossing to allow wounded Gazans to be treated in Egyptian hospitals and to deliver aid.

“This is an opportunity to say not just to the US but to other regional parties that Egypt remains important, it’s a necessary diplomatic player and that a ceasefire is going to go through Cairo,” said Hanna.

He said popular support for the Palestinians on the streets of Cairo has emboldened Egypt’s leadership to adopt a “harsher, more outspoken” line against Israel, despite their 1979 peace treaty.

Foreign Minister Sameh Shoukry, in an address to the UN Security Council, stressed that “concessions must be made,” in a pointed message to Israel.

But Hanna warned against exaggerating the change of tone.

“It’s a weird dynamic… Military officials have a deep distrust of Israel but at the same time they’re working very closely with them,” he said.

Baconi was also tempered in his assessment of Cairo’s political leverage. 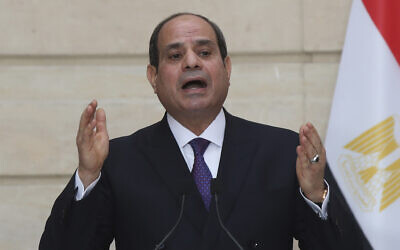 “Egypt does not have enough pressure on Israel. The relationship is an alliance where Israel sets the contours of the military strategy it believes is needed to maintain stability,” he said.

Baconi, who has written a book on Hamas, said Cairo strikes a balance between intelligence coordination with Hamas and its disdain for the Muslim Brotherhood, which spawned the Gaza-based group.

Sissi led the military ouster of Egypt’s democratically elected Islamist president Mohamed Morsi in 2013 and has cracked down on the now-outlawed Brotherhood.

“In 2021, the Sissi regime… does not necessarily view Hamas in the same light, as a threat to its stability,” Baconi said.

He said geopolitical motives have driven Egypt’s temporary reprieve in opening its border with Gaza.

“The strategy… is similar to Israel’s,” Baconi said, to prevent a total collapse “while ensuring Gaza does not flourish and Hamas remains contained within it.” 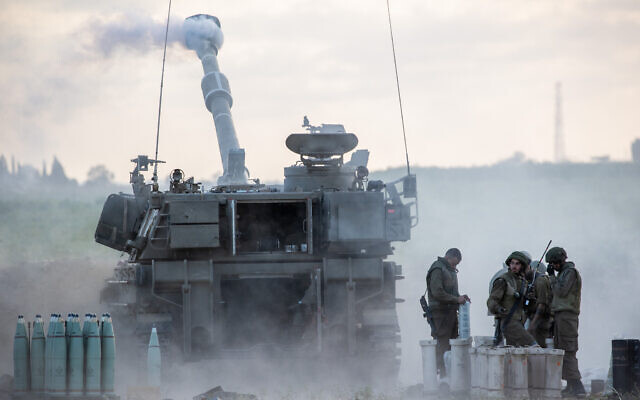 Washington has urged Cairo and its other Arab allies, notably Tunis and Doha, to play a frontline role in defusing the latest Gaza-Israel bloodletting.

As a non-permanent member, Tunisia called for an emergency meeting of the Security Council that was held Sunday to discuss the Gaza crisis, but without calling for a ceasefire.

US President Joe Biden’s administration has said it is working behind the scenes and that a UN statement could backfire, according to diplomats in New York.

Biden himself spoke Monday with Prime Minister Benjamin Netanyahu and “expressed his support for a ceasefire.” Biden “reiterated his firm support for Israel’s right to defend itself against indiscriminate rocket attacks,” the White House said, adding that they “discussed progress in Israel’s military operations against Hamas and other terrorist groups in Gaza.”

For its part, Qatar, a key backer of Hamas and where its leader Ismail Haniyeh lives in exile, has condemned “Israel’s brutal and repeated attacks.”

With Israel’s approval, Qatar since 2018 has periodically provided millions of dollars in cash to Hamas to pay for fuel for the Strip’s power plant, allow the group to pay its civil servants and provide aid to tens of thousands of impoverished families.