ISMAILIA, Egypt (AP) — The Suez Canal chief said Tuesday that authorities are negotiating a financial settlement with the owners of a massive vessel that blocked the crucial waterway for nearly a week.

Lt. Gen. Osama Rabie told The Associated Press he hoped talks with Shoei Kisen Kaisha Ltd., the Japanese owner of the skyscraper-sized Ever Given, will conclude without a lawsuit.

“We are discussing with them a peaceful resolution to the matter without resorting to the judiciary,” he said. He maintained that bringing the case before a court would be more harmful to the firm than settling with the canal’s management.

The massive cargo ship is currently in one of the canal’s holding lakes, where authorities and the ship’s managers say an investigation is ongoing.

Suez Canal Authority chief Osama Rabie speaks during a press conference on the grounding of the ‘Ever Given’ cargo ship in the waterway, in Suez, Egypt, March 27, 2021. (Ahmed Hasan/AFP)

Rabie also said Tuesday that investigators have analyzed data from the Voyage Data Recorder, also known as a vessel’s black box, but no conclusion had yet been reached on what led the Ever Given to run aground.

Last week, salvage teams freed the Ever Given, ending a crisis that had clogged one of the world’s most vital waterways and halted billions of dollars a day in maritime commerce.

The Panama-flagged ship that carries cargo between Asia and Europe ran aground on March 23 in the narrow, man-made canal dividing continental Africa from the Asian Sinai Peninsula.

Its bow was touching the eastern wall, while its stern looked lodged against the western wall — an extraordinary event that experts said they had never heard of happening in the canal’s 150-year history. 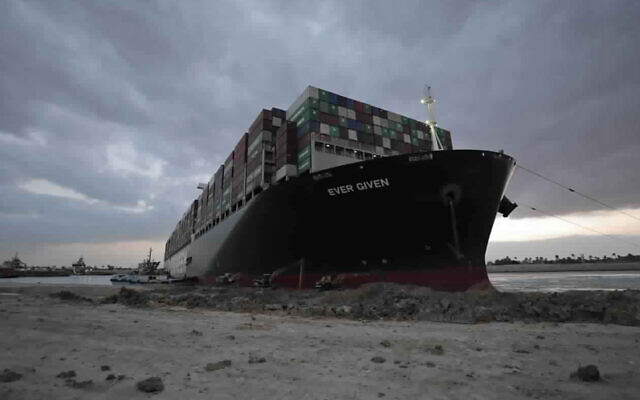 Tug boats and diggers work to free the Panama-flagged, Japanese-owned Ever Given, which was lodged across the Suez Canal, March 28, 2021. (Suez Canal Authority via AP)

He said they relied on dredgers to remove sand from underneath the hulking vessel. Then, a flotilla of tugboats, aided by the tides, wrenched the bulbous bow of Ever Given from the canal’s sandy bank, where it had been firmly lodged.

The unprecedented six-day shutdown, which raised fears of extended delays, goods shortages and rising costs for consumers, added to strain on the shipping industry already under pressure from the coronavirus pandemic.