Egypt on Friday sent an aid convoy to neighboring Gaza with bulldozers, trucks and cranes to “prepare the ground for reconstruction” of the Palestinian enclave, devastated by the recent round of fighting between Israel and Palestinian terror groups.

“Following the directives of President Abdel Fattah el-Sissi, engineers and technical teams crossed the Rafah border point,” read a statement from the government.

Egypt’s heavily secured Rafah crossing is the Gaza Strip’s only passage to the outside world not controlled by Israel.

Last month the territory saw its most intense violence since 2014 as Hamas and Islamic Jihad fired over 4,000 rockets at Israel and the Israeli military pummeled the Strip with strikes targeting the groups’ infrastructure and weaponry.

Egyptian workers stand in the shovel-blade of a bulldozer provided by Egypt, arriving at the Palestinian side of the Rafah border crossing between Egypt and the Palestinian Gaza Strip enclave on June 4, 2021 (SAID KHATIB / AFP)

Egypt played a pivotal role in negotiating the May 21 ceasefire between the sides that brought an end to 11 days of deadly fighting.

They will be used to “clear the rubble” of debris left after the strikes to “prepare the ground for reconstruction”, the statement added.

Israeli strikes on Gaza killed 254 Palestinians, health officials said. Israel says the vast majority were combatants. It also asserts that many of the Gaza fatalities were caused by Hamas rockets that fell short and landed inside the Strip. Rockets and other fire from Gaza claimed 13 lives in Israel. 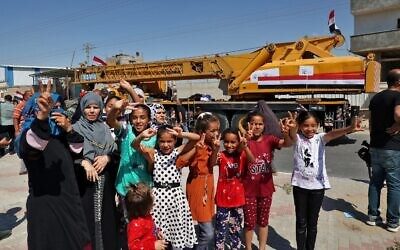 Palestinian women and children pose for a photo near a construction crane provided by Egypt arriving at the Palestinian side of the Rafah border crossing between Egypt and the Palestinian Gaza Strip enclave on June 4, 2021 (SAID KHATIB / AFP)

Also on Friday sources in Hamas told Lebanese media that if Israel does not allow the passage of Qatari funds to Gaza, Hamas will escalate the situation on the border.

With Israel’s approval, Qatar has in recent years distributed hundreds of millions of dollars in cash to enable Gaza’s Hamas rulers to pay for fuel for the Strip’s power plant, pay civil servants, and provide aid to tens of thousands of impoverished families.

Hamas sources told the Lebanese Al Akhbar newspaper that the organization would wait until the end of next week for the money to enter, “and if this does not happen it will take an important decision regarding the mutual ceasefire.”

A senior Hamas official in January said Qatar would be providing $30 million every month, meant for poor families in the Gaza Strip.

Qatar is a key backer of Hamas and has invested some $1.4 billion in the coastal enclave since 2012, Qatari Foreign Minister Sheikh Mohammed bin Abdulrahman al-Thani said at a financial conference in St. Petersburg, Russia on Friday.

According to the Lebanese report, the group threatened to “use pressure in the border area,” and may also resort to options that could “renew the widescale confrontation,” without elaborating further.

Since the ceasefire took effect on May 20, there has been no rocket fire from Gaza toward Israel. However, on Sunday night a Palestinian who crossed from the Strip stabbed a security guard, lightly injuring him outside an Israeli town near the enclave. On Monday, a fire in southern Israel was apparently sparked by a balloon-borne incendiary device launched from the Gaza Strip.

Friday’s threats from unnamed officials in the terror group were not the first since the ceasefire began.

A leader of the terror group in Gaza threatened last Wednesday to resume rocket attacks if Israel “violates” the Al-Aqsa Mosque on Jerusalem’s Temple Mount, while a spokesman for Hamas’s armed wing told a crowd of supporters last week that it will respond to any Israeli escalation in kind, after some Israeli officials called for a harsher response to the terror group, including the renewal of assassinations of Hamas leaders.